The Orville: New Horizons reached a watershed moment when it comes to diplomatic situations for the Planetary Union, given the uneasy tensions with the Moclans. The episode "Midnight Blue" follows the ship as it follows up on the all-Moclan female colony sanctuary world. Since the all-male-dominated planet of Moclus considers the presence of females a threat, the colony is under the watchful eye and protection of the Union, similar in the vein of how democratic Taiwan is "protected" from communist China without as much convoluted jargon. Following an awkward exchange between Gordon (Scott Grimes) and the adolescent Topa (Imani Pullum), she joins Kelly (Adrianne Palicki) and her father Bortus (Peter Macon) on the planet's surface to meet the other Moclan females. From this point forward, consider this your minor spoilers warning.

Much of the episode revolves around Rena Owen's Haveena, the elder Moclan female, who's an inspiration to Topa. The agreement in place established in a previous episode between her, Moclus, and the Union is that she would stop trying to smuggle female-born Moclans to the colony while the much more militant Moclus would grant the colony autonomy. In Moclus, male babies would be left alone, and any females are forced to be altered to male following birth. While it was an uneasy truce, the agreement obviously didn't sit well with Haveena as it allowed Moclus to continue the practice, and since Topa was changed back to her original birth gender in a previous episode ("A Tale of Two Topas"), the seeds were sewn for the next contentious intergender conflict.

Given the bitterness of the rivalry, things go initially & horrifically one-sided as you might expect, with Kelly and Bortus isolated away from the Orville and picking up the pieces against the threat. Given creator Seth MacFarlane's pick of Dolly Parton as a source of Haveena's inspiration, it was only a matter of time before the actual singer-songwriter appeared as a fictionalized version of herself performing her hit "Try" in a simulation (it is the future, after all), after offering her sagely advice. Writer Brannon Braga & Andre Bormanis really packed a ton in the feature-length runtime of the episode, and once again, director Jon Cassar delivers the goods bringing a perfect balance of action and heart.

If there was one thing about the majority of Moclan society, it's the dedication to their rigid beliefs despite their own involvement with the Planetary Union. I mean, we saw episode after episode the butting of heads, with only the common enemy of the Kaylon trying to eliminate all biological existence as the thread for survival. Even before the Kaylons became the biggest threat or even the Krill, we're never really given an explanation as to why the Union even appealed to Moclus. As a Union officer, Bortus has evolved to a more progressive stance even when his partner Klyden (Chad L. Coleman), who deserves his own serious consideration for an Outstanding Guest Star Emmy) remained stubborn to their species' traditional ways. There's a pretty big gap, and a silver lining I wish was better explained leading up to this, but in the grand scheme of things, with shortened seasons as they are now, I guess it's something that will be left unanswered for now, short of the Kaylons attacking Moclus directly, and MacFarlane feeling like exposition is needed.

Moclans draw some parallels to Star Trek's Klingons, and seeing Macon's Bortus go in a barbaric rage like that is about as satisfying as Michael Dorn's Worf on Star Trek or any '80s action movie for that matter. Without beating a dead horse as far as familiar speeches that MacFarlane's Ed Mercer goes for, I do like his "less is more" approach this time around with Haveena and let her meet her hero from the "distant" past. With two episodes left in the season, another major battle with the Kaylon is probably in the cards, but who knows what will happen as the Union might actually be in a far more vulnerable position than they were at the end of season two. 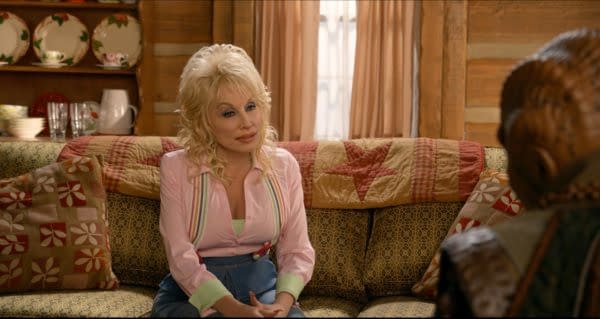 Review by Tom Chang
9/10
Hulu's The Orville: New Horizons S03E08 "Midnight Blue" director Jon Cassar and writers Brannon Braga and Andre Bormanis deliver another action-packed episode with heart. Adrianne Palicki and Peter Macon can front their own action film. Rena Owen deserves her own series and Dolly Parton is not just a cherry on top but an entire orchard.
Credits
Director
Jon Cassar

Andor: Tony Gilroy Wanted Approach to Rogue One Prequel "To Be Real"

Andor EP & showrunner Tony Gilroy explained how he got his team to set aside their Star Wars fandom during their work on the Disney+ series.

As promised, Amazon's The Boys released an official Season 3 bloopers reel (that more than a few Jensen Ackles fans had been asking for).

ABC's The Rookie showrunner Alexi Hawley discusses the impact that season-opening "Chenford" twist and shocking discovery will have.

Steven Moffat addressed the rumblings about a return to Doctor Who as either showrunner or writer; says RTD's scripts are "fantastic."