Directed by Tawnia McKiernan and written by Vivian Tse, "The Lucky Ones" was an interesting shift in focus that we didn't see coming and that's one of the things that made us appreciate it that much more. What I'm about to write isn't meant to undercut what Josh McDermitt (Eugene), Christian Serratos (Rosita), Norman Reedus (Daryl), Melissa McBride (Carol), Khary Payton (Ezekiel), Ross Marquand (Aaron), and the other members of our long-time TWD family brought to the game this week because everyone is firing on all cylinders this season. But this week's chapter of the 11th & final season of AMC's The Walking Dead used our survivors to offer us a deeper look into the various aspects of the Commonwealth's psyche, as demonstrated by Gov. Pamela Milton (Laila Robins), Hornsby (Josh Hamilton), Mercer (Michael James Shaw), and Mercer's sister & the "real" Stephanie, Max (Margot Bingham). So for a look at what we learned, what we think we learned, what red strings we should be adding to our Charlie Kelly/"Pepe Silvia," and how Maggie (Lauren Cohan) serves as the voice of the long-term TWD viewer, check out our review of "The Lucky Ones" (with the "MAJOR SPOILERS AHEAD" sign officially blinking).

So before I jump into my running observations on what worked and what's keeping not of, a quick thought or two on what I was referencing before the spoiler break. When it comes to the four main Commonwealth players I listed above, "The Lucky Ones" channeled the various shareholders in play when it comes to the massive, mysterious community.

With Milton, we have "The Benevolent 1%" who believe their guiding hand and vision will help set the course for a better tomorrow, and that they should be entrusted to make the decisions for the greater whole. But as we've seen so far, leadership like that comes with a price- and that price is usually individual freedom. If Milton represents an almost fantasy-like vision of leadership and community building, Hornsby is the "Tyrion" of this story. He knows how things get done, and that sometimes that means doing some very ugly things. Hornsby is clearly hungry for power, but the jury is still out on his real motivations. But it's clear he recognizes talent (like with Carol) and knows how to feed into folks' wants while making it feel genuine, two traits that have served him well and might just keep him alive. And yet underneath that suit, something is simmering.

With Mercer, we have one of the most "Rick" figures we've had in some time. He's someone who is committed to a code of honor that we can feel has been tested under some serious fire. And yet, he keeps his eye on the bigger picture with an understanding that sometimes a "shit sandwich" needs to be bitten into, chewed & swallowed every now and then for the greater good. But as we're beginning to see, there are limits to just how far he's willing to bend. We can only imagine what's going to happen if he breaks. And then we have Max, who I would say without hesitation is the Commonwealth's version of Eugene. She's the dreamer, the geek, the one looking to reach out and make connections to start building back something better. But also much like Eugene, she vibes being one of those dreamers who you can only push so far before you find your forces having their hands blown off from sabotaged weapons.

As for how Maggie factors into all of this and why this episode sets her apart from the others and a ton more, here's a look at some of the highlights and takeaways worth taking note of:

The flashback scene between Mercer and Max was a nice demonstration of the love the brother and sister have for each other, and how protective Mercer is of the lives they have there. It's also a nice look into the conflicting takes each has on their lives, with Mercer much more grounded & practical while Max is always thinking literally and figuratively beyond the walls of the Commonwealth.

Milton realizing that her son Sebastian (Teo Rapp-Olsson) is an "asshole" and cutting off his credit shows that she's not blind to her son's failings but there is still this sense of denial over the extent of the damage he's causing. Once again, we have the "benevolent ruler" blind to what's going on in their own "kingdom."

Daryl and Mercer are developing a very strong "Rick/Daryl" friendship vibe, with Mercer impressed by the more he learns of Daryl's past. In fact, he was impressed enough with what he's seen of Daryl to offer him a reality check on the Commonwealth in case Daryl was getting a little too caught up in the smoke-n-mirrors.

MAJOR FAN THEORY CONFIRMED ALERT: So it looks like Milton did know Alexandria lead Deanna (Tovah Feldshuh), as she reveals to Daryl. Adding that to the scene at the end between Milton and Hornsby over who would run the three communities (Alexandria, Hilltop & Oceanside), we can't shake this feeling that settlements are being "gifted" to the still-remaining upper-crust political elites. And if that's true, aren't we looking at a clear path towards establishing a CRM connection?

"You are not a lesser man": A theme that's been addressed a lot this season and one that will be a factor at the end of the episode is how much of their current selves are they willing to sacrifice to fit into a community that could be the key to the future. And those words that were spoken by Carol to Ezekiel explaining why he deserved to be moved up on the operation waitlist only further complicate the debate. Because as much as we know Ezekiel to be a man of belief and conviction, we also won't judge him for wanting to live.

The scene between Eugene and Rosita was definitely one for the long-time fans and showed me two things. Yet again, we have two of our long-time survivors questioning whether or not this is the future that they've been fighting for so long. But we also see just how much Eugene still loves Rosita, not willing to risk her hopes for a better future by bringing her into the truth behind "Stephanie."

Milton & Maggie: As easy as it would be to say that Milton and Maggie are two sides of the same coin, Maggie makes the case for the difference between the two that is the defining one. For Milton, leadership is defined by what one has. For Maggie, leadership is defined by what one does. So do I think Milton is upset that Maggie turned down the offer? Not really, because a powerful force like Maggie's within the walls of the Commonwealth is more of a threat to Milton than a benefit. For Maggie, it's about being given the opportunity to see the Commonwealth in action to convince her that her instincts are right (even as others leave Hilltop for the Commonwealth). As much as her head is telling her that joining with the Commonwealth is the right move, that moment when she sees Daryl literally being given marching orders and literally falling into line was too much symbolism for her to ignore. "Everything costs something," she reminds Milton when explaining why she turned down the offer- a very "Rick" moment that we hope proves her right. Because at that moment, Maggie's decision is echoing the sentiments of long-running fans. Is the Commonwealth really the best that the future has to offer, after everything they've done and everything they've lost to get here? That needle is definitely inching closer to the red zone, and we haven't even gotten to "Six Months Later" yet.

Milton/Hornsby: As I alluded to earlier, this is an interesting scene because it reinforces the theory that there may be some larger "new world order" in play that seems to be dividing up communities like fiefdoms. But along with that, we get a stronger sense of the near-disdain Milton feels towards Hornsby, clearly realizing that she has to tolerate him based on his current usefulness as well as his knowing "where the bodies were buried" in the past for the Milton family. For Hornsby, it's a strong commitment to both Milton & the Commonwealth's vision. But what has us concerned (and as we saw at the end during his moment with Aaron) are the demons that Hornsby seems to be keeping at bay… demons that appear to be inching closer and closer to coming to the surface.

RANDOM THOUGHTS: Heartbreaking question from Lydia (Cassady McClincy) to Daryl: "How do you know 'when'?"; Ezekiel is soooo wrong about pineapple on pizza; If we get one more episode between Eugene and Max like this one, then Mercer and Princess (Paola Lázaro) might have some serious competition for the best Commonwealth couple.

The Walking Dead Season 11 Episode 12 "The Lucky Ones" 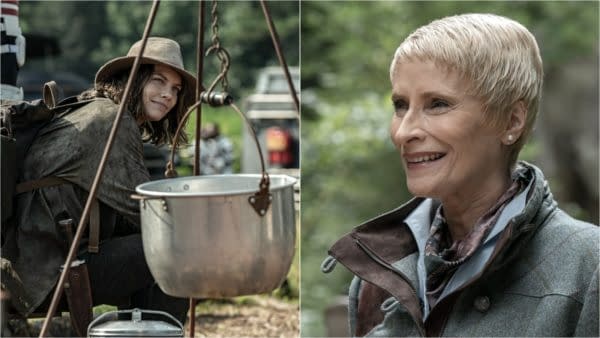 Review by Ray Flook
8.5/10
Directed by Tawnia McKiernan and written by Vivian Tse, "The Lucky Ones" was an interesting shift in focus that we didn't see coming and that's one of the things that made us appreciate it that much more. This week's chapter of the 11th & final season of AMC's The Walking Dead used our survivors to offer us a deeper look into the various aspects of the Commonwealth's psyche, as personified by Gov. Pamela Milton (Laila Robins), Lance Hornsby (Josh Hamilton), Mercer (Michael James Shaw), and Mercer's sister & the "real" Stephanie, Max (Margot Bingham). So for a look at what we learned, what we think we learned, what red strings we should be adding to our Charlie Kelly/"Pepe Silvia," and how Maggie (Lauren Cohan) serves as the voice of the long-term TWD viewer, check out our review of "The Lucky Ones"

The Flash: The CW Deprived Legends of Tomorrow Fans of Another Finale

The Flash Showrunner Eric Wallace planned a wrap-up for Legends of Tomorrow in Season 9, but the reduced episode count kept it from happening.

Legendary sitcom Fawlty Towers is getting a sequel written/starring John Cleese as Basil Fawlty, who tries running a hotel with his daughter.