It's only been a week, but already the shine is starting to wear off WWE Raw since the return of the fans. With no John Cena segments booked for TV this week, can Raw hold viewers' interest with this week's episode? That was a rhetorical question. We all know the answer is no.

Nikki ASH kicked off WWE Raw this week with a promo about self-confidence in the wake of cashing in her Money in the Bank contract and winning the Raw Women's Championship last week. Based on that hideous costume she's wearing, Nikki's self-confidence was never in doubt. Speaking of hideous costumes, Charlotte Flair hit the ring to heel it up, followed by Rhea Ripley. The long and short of it is that these three will compete in a triple threat match for the Raw Women's Championship at SummerSlam, and will fight in various combinations every week until then to ensure we're all sick of it. With that in mind, Charlotte and Nikki booked a match for the main event tonight.

Damian Priest, like the rest of us, was tired of watching Sheamus and Humberto Carrillo fight every week so he decided to beat Sheamus's ass instead. In a non-title match, of course, because we wouldn't want to be too excited when they fight for actual stakes in the future. Priest won.

Jinder Mahal said he's suing Drew McIntyre for assaulting Shanky with a chair last week. Really, I would think it would be a criminal matter, not a civil one. Anyway, McIntyre went on to both beat up Veer and win the match by DQ, then to take out Mahal's lawyer for good measure. OBJECTION!

Eva Marie and Doudrop lost a non-title match to tag champs Natalya and Tamina when Alexa Bliss's stupid doll appeared on the titantron to mock Eva Marie. In the course of the whole thing, Natalya seemed to blow out her knee. Well done, all.

Last week, Keith Lee made his long-awaited return to the ring only to lose to Bobby Lashley. Also last week, Karrion Kross for some reason got called up to Raw despite still being NXT Champion. Kross lost to Jeff Hardy(!!!) in a non-title match, and then to make Kross look even stupider, Hardy got COVID This week and now Kross can't get his win back. So, in a battle of last week's jobbers, Kross beat Keith Lee in a match. So, just to be clear… COVID19 > Jeff Hardy > Karrion Kross > Keith Lee. But Hardy jobbed to pretty much everyone on the roster over the last year, so… make of that what you will.

Teaming up with a reluctant Mustafa Ali, Mansoor rolled up Mace to beat Retribution in a tag match. This odd-couple pairing is mildly amusing, for now.

Before Bobby Lashley could turn down Oldberg's challenge from last week, Cedric Alexander and Shelton Benjamin came out to complain that they didn't get buried enough when Lashley kicked them out of Hurt Business earlier this year. Happy to set things right, Lashley beat them both in a handicap match.

John Morrison beat Riddle in a match where Riddle was heavily outnumbered, with Miz, AJ Styles, and Omos all at ringside. Many references to semen were made and after the match ended, The Miz skeeted all over the announcers with his dipstick. Styles nearly killed Riddle with a Styles Clash after the match. Where the hell is Randy Orton, anyway?

Reginald beat R-Truth in a 24/7 title match in the ring where Truth wore a microphone the whole time, which is how they should do every match. Reginald has some impressive flips, but he also botched multiple times during the match. I'm surprised he didn't blow out his knees jumping over the ropes to the outside to escape the jobber chase after the match.

Charlotte Flair beat Nikki ASH clean in a non-title match. Afterward, Nikki said she almost won so she's confident she could win next time. As a result, they'll do this again next week (of course they will). Charlotte beat down Nikki to end the show.

I can say one positive thing about WWE Raw this week: it was heavy on matches and light on talking segments. Unfortunately, none of those matches mattered and the show overall was boring and marred by senseless book issues, many of them systemic. With no John Cena, and the same matchups likely to happen every week until SummerSlam, there was really no reason to watch any of this. 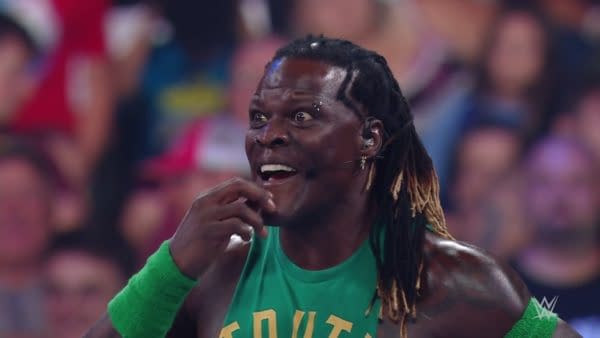 Review by Jude Terror
3/10
I can say one positive thing about WWE Raw this week: it was heavy on matches and light on talking segments. Unfortunately, none of those matches mattered and the show overall was boring and marred by senseless book issues, many of them systemic. With no John Cena, and the same matchups likely to happen every week until SummerSlam, there was really no reason to watch any of this.

Steve Rogers learns what a voicemail is in this preview of United States of Captain America #4, but he still doesn't know how to check MySpace.

An American costumed vigilante of questionable mental state controlling the law enforcement of an entire continent? What could possibly go wrong in Batman the Detective #5?

Aging millennials rejoice and relive your youth with this Wednesday when Marvel publishes X-Men Onslaught Revelation #1. Read a preview here.

AEW has four hours of Grand Slam set for Dynamite and Rampage next week. Here's the full card as it currently stands for both shows.