Marvel released four Amazing Spider-Man #1s in nine years. The issue that dropped Wednesday, April 27th, is the 2022 edition from Zeb Wells, John Romita Jr., Scott Hanna, Marcio Menyz, and Joe Caramagna. It's a back to basics restart for the series. No Spider-Totems, no cushy job with Iron Man or the Avengers. Just Peter Parker, no money, and a lot more enemies than friends. It's not quite square one, but it's close enough.

Speaking of which: Peter Parker did something, we don't know what, and presumably, because of that, he's alienated everyone, including Mary Jane Watson. The villains are engaged in a turf war, which I imagine follows up on Devil's Reign, and for some reason, Spider-Man is the guy they're all angry at. That's the old Parker luck, I suppose.

The twist at the end of the comic seems reasonable, and I won't spoil it or allude to it. If you want to be spoiled, well, click right here to go to Rich's post about it.

Maybe writing one of these major properties is best compared to a cover song. Everyone already knows it, but the point is what a different artist adds or subtracts from the song. Romita Jr. is as safe a pair of hands as you can imagine, and Wells is well known to the Spider-Office already. Through that lens, 2022's Amazing Spider-Man #1 is a largely faithful cover executed well by a team of old hands. The tune's stuck in my head, and I never thought I'd say that about the Web-Head. 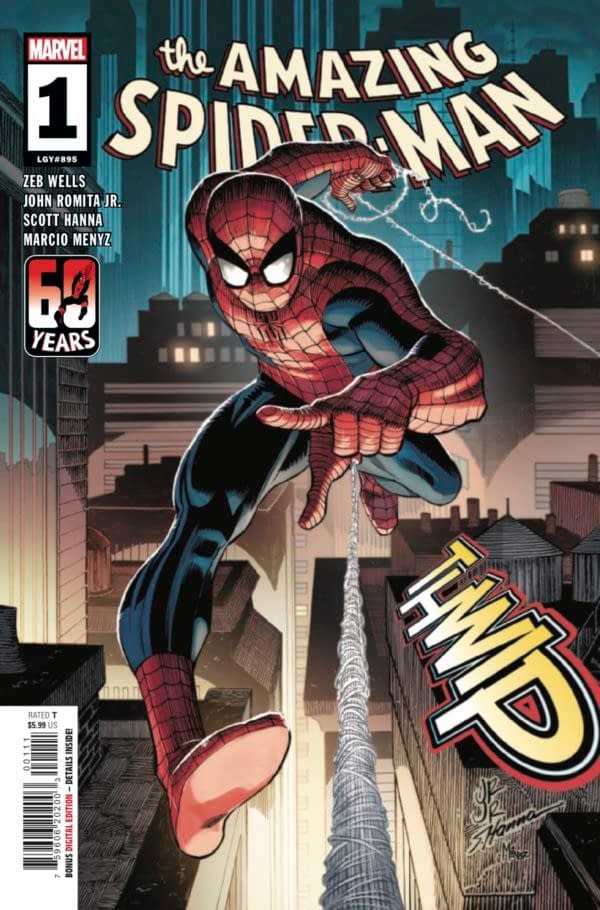 Giles and Willow lash out at Xander when he suggests they tell the truth in this preview of Vampire Slayer #3, in stores Wednesday.

Darth Vader battles corruption in the Empire in this preview of Star Wars: Darth Vader #24, pitting him against an evil governor.

Damian goes up against the Red Triangle Gang in this preview of Robin #15, in stores on Tuesday from DC Comics.

What will The Thing do when he finds out about the secret Super Fight Club in this preview of She-Hulk #4? He'll probably want to join in.

The Justice League go into battle at a disadvantage in this preview of Batman: Fortress #2... is it The Flash's creepiness to blame?

Greedo fires his blaster at an inopportune moment in this preview of Star Wars: Han Solo and Chewbacca #3.