We mentioned this on the live streaming Marvel D23 panel report with Marvel executives C.B.Cebulski and Tom Brevoort that ran on Bleeding Cool, but it might be worth going back and fleshing it out. Specifically the difference between Black Panther's first design by Jack Kirby, when he was known as Coal Tiger. And then how he appeared on the cover of Fantastic Four #52. 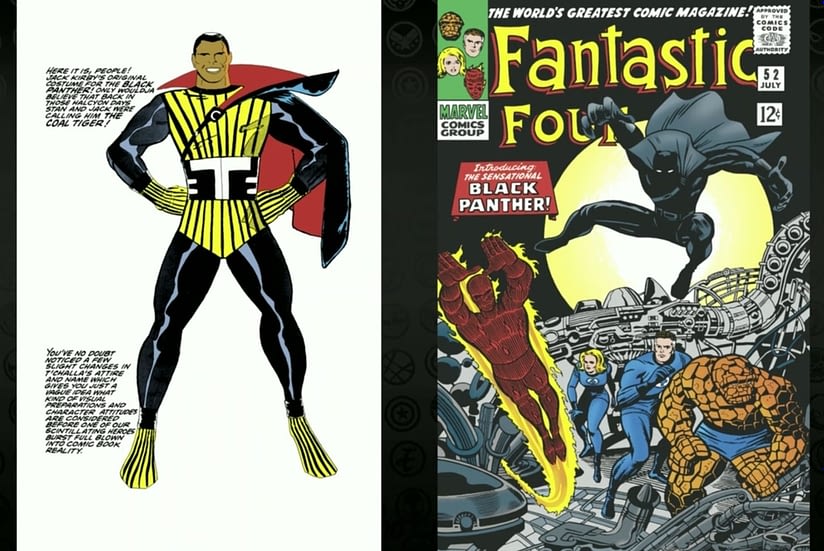 And below is Jack Kirby's original cover design, with what was intended to be the final design for the Black Panther. It is notable that he does not have a full face mask and we can see his nose, mouth chin – and skin.

This was in 1966 and having a black superhero in 1966 was a fairly revolutionary thing… it's kind of impossible to think about that these days but it was true, and in fact there was such concern and what this might do to the sale of the Fantastic Four in southern states or whatnot, that's the whole reason his costume was changed and he got the full cat face mask, so that on that first appearance cover, he looks cool but you can't tell what his ethnicity is. It worked out, he looks great, it was a great moment, but there's a little underbelly to it that's not as wonderful.

Indeed. Black Panther's costume is the way it is, because Marvel had to consider the feelings and reactions of racists – whether that be printers, distributors, retailers or readers. To whom, the front page promotion of a black superhero standing alongside white superheroes – and getting star billing – was unacceptable. On the cover at least.

This came to mind when I found myself arguing with certain comic book speculators over the appearance of DNA in the comic book Red Hood: Outlaw #37, a non-binary superhero character, with people saying they were fed up of comics featuring characters like that, and why did that aspect even have to be mentioned in the comic book. Maybe, Tom, it's not that impossible to think about it these days.

There's obviously a lot of Archie in Archie Comics 2022 solicits and solicitations. It's like Batman at DC Comics, it comes with the territory. But

Dynamite Launches 50 Cent Reprint Issues For The Boys And More

Marvel, DC Comics, Image and other publishers have done a roaring in dollar reprints of first issues, ordered in bulk by retailers and used as ways to

Marvel to Cancel Strange Academy in April, Relaunch in Summer

Marvel noticed those recent issues of Strange Academy selling for big bucks on eBay and realized how much better it would be with a new number one.