This is the Top Ten Bleeding Cool Bestseller List, as compiled by a number of comic stores from their sales on Wednesday and Thursday. It measures what are known as the "Wednesday Warriors", those who can't wait till the weekend to get this week's comics. And this week, it takes Dark Knights and White Knights to break into the Dawn Of X hegemony – as well as Fallen Angels not being as well-received as other titles. But the expected big hitter, Superman #18 with its secret identity reveal, is knocked back, only placed just above Detective Comics. 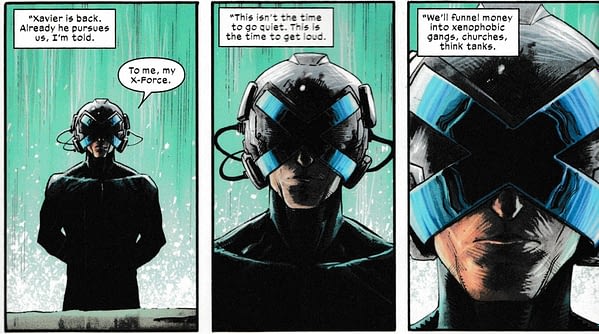 Severn Marvel titles and only three DC titles on our top ten list this week, with the big-event Superman #18 only coming in at fourth place–well below our expectations. Two Batman titles were the only other DC books in the top ten, indicating that reader fatigue with DC is continuing (and perhaps even escalating). Even some regulars who buy DC out of habit are complaining about the content Maybe it's time to ask Geoff Johns how they should do Rebirth II.

Big week for DC at FFFwith six of the Top Ten Bestsellers coming from them. Batman Curse of the White Knight took the top spot with Superman's big reveal taking the second spot selling just two issues less. That's probably the highest Supes has been on our sales list in a while. Dark Knight Returns was #3 and Detective Comics came in at #4. New Mutants and X-Force are starting to settle into their numbers with the rest of the X-Books. The hype has died down a little and I expect the titles to stay pretty close numbers wise. The main X-Men book delay though isn't going to help. Symbiote Spider-Man was the only other Marvel book which sold well because of the variants. I wish they'd spread them out over the five issues instead of putting all of their eggs in one basket. But that isn't how Marvel rolls. Something is Killing the Children was the only indie book in the Top Ten. Like the X-Books, the Boom Hot Books are also starting to settle. Big sales on #1 and less on the subsequent. Who could've guessed that? Batman's Grave rounded out our list at #10. It's still a Batbook so people will buy it, even if it is a special kind of Warren Ellis weirdness.

You'd think that "Superman's secret identity revealed" would successfully sell Superman comics. You'd be wrong, at least in our case. Superman #18 only managed to rank at 8th this week, lower than the 4 Batman titles in the top 10, and every Dawn of X book out this week. X-Force took the top spot yet again, solidifying it as the most popular X-title besides the flagship at our shop. Fallen Angels is still hanging in there surprisingly well, but the art is hurting it more and more.

Superman revealed his secret identity (again) and no one carried. Supergirl this week for whatever reason outsold Superman. X Force took the top spot for us. That said comic sales have been slower than at this time last year for us.

While the DC/Marvel comics have the lead, there's a decent follow up with newbies Far Sector and Undiscovered Country. Pretty Deadly Rat and Deadly Class hold their own, too.