It was at the beginning of the year, that Bleeding Cool first told you that the key phrase in superhero comic books in 2019 would be 'connective tissue'. The idea that shared universes mattered again, that what happened in one title may affect another, and that none of them were working in isolation anymore. It was also the first time that phrase was used publically in this specific fashion –  but Bob Fingerman got there a decade before.

Then in the summer, DC Comics publisher Dan DiDio used the phrase on stage when talking about DC Comics plans back in San Diego Comic Con, and talked about creating a unifying timeline for the DC Universe.

But now Marvel Comics are to publish the new adventures of The Masked Raider. And, courtesy of writer Al Ewing, he is 'connective tissue' made flesh. In both Marvel Comics #1000, today's Marvel Comics #1001 and Incoming #1 to be published in a couple of months and change.

Oscar Schisgall's 1930's novel, The Black Caballero, crossed The Shadow with Lone Ranger to create the Masked Rider and his Native American companion Blue Hawk. It crossed The Shadow with Lone Ranger rather effectively. It was picked up, reworked, serialised and continued in 1934 as The Masked Rider pulp magazine, the first such volume published by Martin Goodman, the man who later founded comic book publishers Timely, Atlas and Marvel Comics, and the cousin-in-law of Stan Lee.

Published regularly, with several different authors, the character also appeared in comic book form in Marvel Comics #1 renamed The Masked Raider, later Marvel Mystery Comics. That ceased when the character was sold to Standard Publication in 1940, who published their own more Western-focus version of the character.

The Masked Rider was Jim Gardley, a young cowpoke in 1830s Texas, originally approached with the offer to serve as hired muscle for a powerful rancher. When he found out the boss wanted him to "convince" all the small ranchers in the area to sell their lands to him at dirt cheap prices, Gardley turned down the offer. The rancher then framed him for cattle rustling and had him jailed. Escaping, Gardley started preparing himself to take revenge. He created the costumed identity of the Masked Raider, perfected his aim and draw and partnered himself with a feral white horse by the name of "Lightning".

In Marvel Comics #1000 we learnt that his mask was the Eternity Mask, worn by many before him and after him. Formed from the body of the very essence of reality, Eternity and worn by many through the ages.

Created by magiciains in the Middle Ages and worn by the first Black Knight, with the power to make the wearer the equal of their opponent.

… it inspired both the American Revolution and much other history that followed, with the theme of throwing off the power that contains you, by creating true equality between you and your oppressor, giving you the ability to, in the words of one Dominic Cummings, take back control.

So much history. Though I am presuming Brexit won't be among that list. All this before being worn the Masked Rider, Jim Gardley, the cowboy hero of Marvel Comics #1, before he passed it on…

…before worn by his successor… who then passed it on…

… to The Ferret. Who, in retirement donated it to the Scientists Guild, the Enclave, the Three XXXs to use to fight the Nazis…

…not that they seemed to know what to do with it.

Belief is necessary you see, and science is not subject to belief, apparently.

And so they kept it unused, even as others who did believe sought it. And a young Steve Rogers passed it, on his way to his own Nazi-fighting transformation.

And so they kept it. Unused.

Even as others sought it.

Until, it was taken. By Enclave and Scientist Guild member member Jerome Hamilton, rebelling against his own.

And rejoined the litany of heroes using its power… did Jerome Hamilton become Blind Justice or did he pass it to the person who was?

And whoever did take the mask from the body…

Knowing much of its history… and then wearing it themselves.

And so to today's Marvel Comics #1001, seemingly odd offcuts of #1000 contains some gems. But beginning with this one page. Telling us that the Eternity Mask lets the wearer look through time and space.

…and can see the narrative, The story. The whole. And sees that everything is made of narrative. The wearer of the Eternity Mask is walking connective tissue. Am I going to far with that? I don't think so.

Because the Bleeding Cool preview of Incoming #1 has this Masked Raider tell his story and how he acquired the Eternity Mask. That it not only makes you someone's equal, but it copies the powers of those around him. And the comic uses that phrase, that Bleeding Cool named back in January, that it shows him the Connective Tissue of the stories around him. 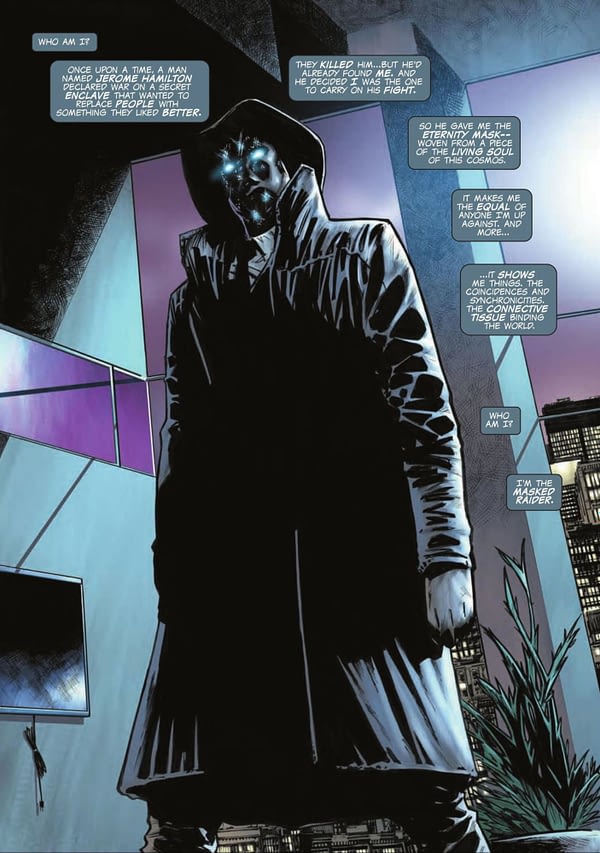 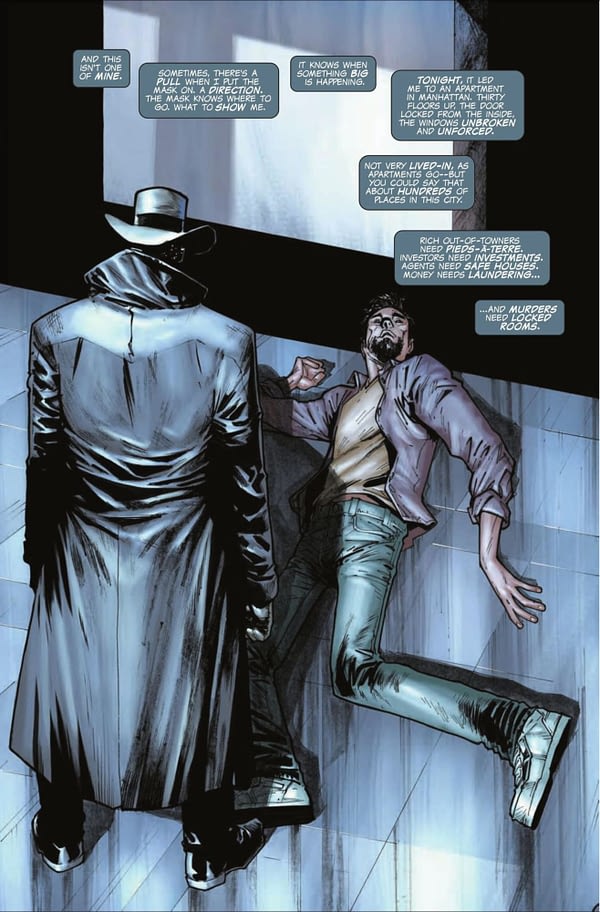 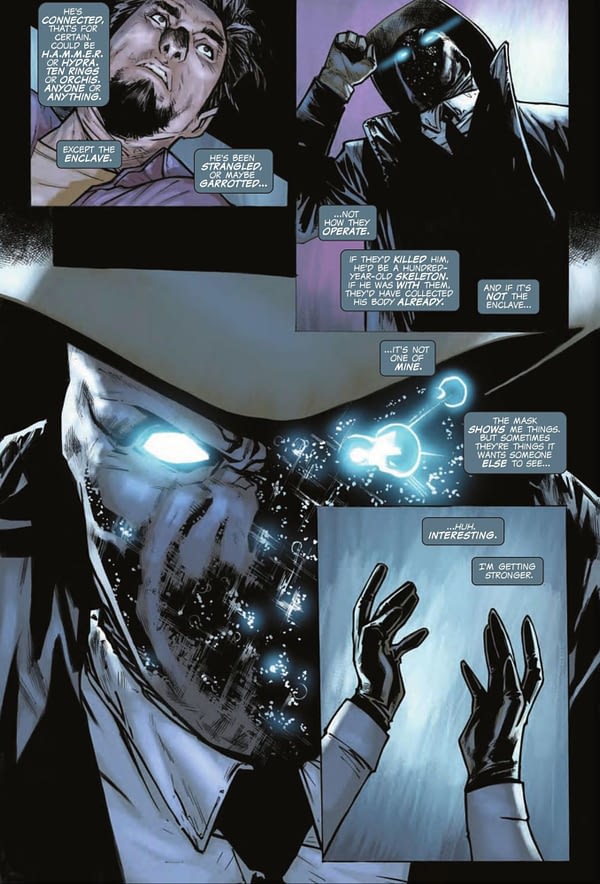 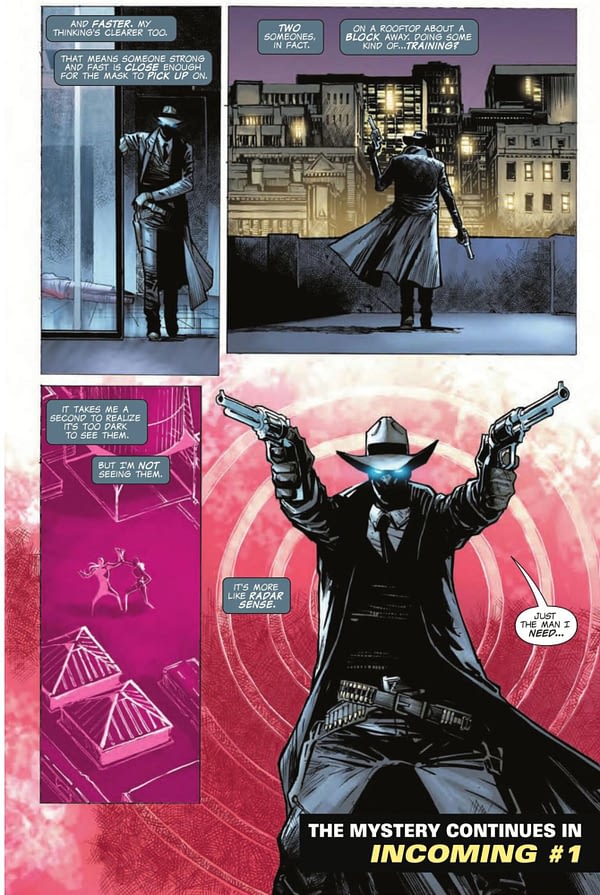 MARVEL COMICS #1001
(W) Al Ewing, Audrey Loeb, More (A) Amanda Conner, Declan Shalvey, More (CA) Rod Reis
THE BIGGEST STORY IN MARVEL HISTORY CONTINUES!
WHO IS THE MYSTERIOUS NEW CHARACTER FROM MARVEL'S PAST?
It was a story too large for any one issue, with too many classic Marvel creators who wanted to be a part of the fun! And so the party continues on with this additional celebratory issue, featuring additional secrets and revelations about the Eternity Mask and the person who now wears it!
Rated T+In Shops: Oct 02, 2019
SRP: $4.99