As well as attention being given to Captain Marvel #1 from the end of last year, with someone who could be the secret identity of Star. 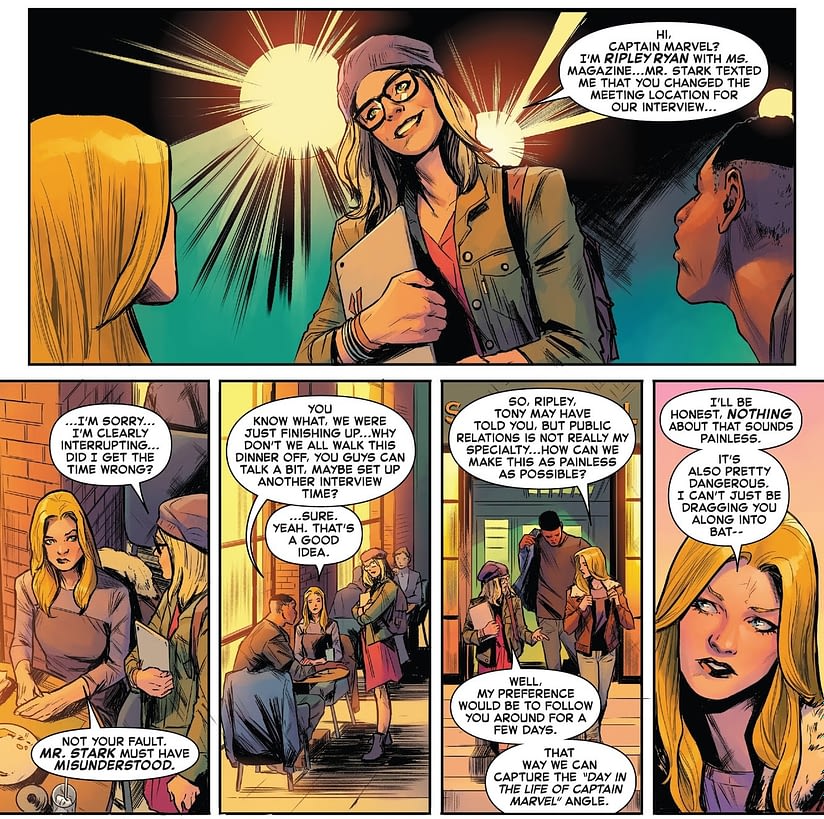 However, for those planning to line up outside their comic store in the morning and wiping the shelf out, a word of warning. Bleeding Cool has learned that Star hardly appears in the comic book at all. A couple of panels in the distance. Hardly a second appearance and no sign of us being wiser about who or what she is. Unless of course…

Well, I'm told the ending is an interesting one. And to brush up on my Dr Minerva.

CAPTAIN MARVEL #9
(W) Kelly Thompson (A) Carmen Nunez Carnero (CA) Mark Brooks
A STAR RISES, ANOTHER FALLS!
Being Captain Marvel has been the greatest joy of Carol Danvers' life. But a new hero is rising to the limelight – just as Carol's own powers begin to fail her. With everyone now believing she's a Kree traitor, Carol can't help but wonder…does the world even need Captain Marvel?
Rated T+In Shops: Aug 14, 2019
SRP: $3.99

Once upon a time, Tony Lee wrote the Doctor Who comic books for IDW. Most of them anyway, I write one. But then, after mid-way through the Doctor Who/Star

In a recent Substack post of Grant Morrison's Xanaduum, they have been talking about their work on the Multiversity comic book at DC Comics, going into

Tales From The Quarantine For Christmas? I Guess We'll Have To See…

For years on Bleeding Cool, we have covered crowdfunded comic books, those that succeeded beyond people's wildest dreams, and those that crashed and

The Origin Story Of Claire Lim And Her Dark Well

Claire Lim is a Scottish presenter, writer and podcaster, who has been living and working in London for 20 years. But now seems to be jacking it all in to

Walking Dead Alternatives in The Daily LITG, 26th of November, 2022

Celebrate 30 years of Wildstorm, and nearly as many of DC trying to reboot it, with this preview of Wildstorm 30th Anniversary Special #1.

Clea is unable to celebrate the return of Doctor Strange physically in this preview of Strange #8, in stores Wednesday from Marvel.

Detective Comics 2022 Annual #1 Preview: Blast from the Past

Travel back to Gotham City in the year 1776 for this preview of Detective Comics 2022 Annual #1.