The Infinity Warps are a universe of Marvel characters mashed up with other characters, created as part of the Infinity Wars super-mega-crossover event last year. And they stuck around after the ending of that event thanks to some Infinity Stone chicanery. And as part of a new event this Summer, the Infinity Warps will return for a story running across six Marvel annuals (old school style), written by Al Ewing, with art by Carloses Villa and Gomez, and maybe more, called Secret Warps. 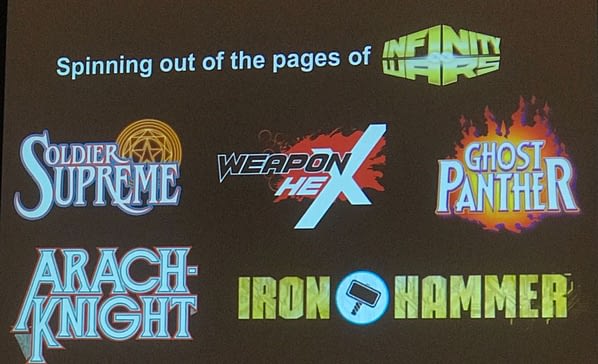 We've previously joked that the Infinity Warps were actually invented by legendary X-Men scribe Chris Claremont as part of his X-Men Forever series, but what if someone else invented them before Claremont? And what if that person was Stan Lee himself?!

Usagi Yojimbo creator Stan Sakai took to Twitter Tuesday to share a sketch Stan Lee drew for him, something Stan Sakai says Stan Lee did often while Stan Sakai lettered the Amazing Spider-Man newspaper comic which Stan Lee wrote. But when Stan Lee sent Stan Sakai this particular sketch, it was different than the usual ones. This one featured a mash-up between Stan Lee (and Steve Ditko's) wall-crawling superhero, Spider-Man, and Stan Sakai's samurai rabbit, Usagi Yojimbo!

A few days ago I had posted that the Spider-Man newspaper strip had ended. I lettered the Sundays for 25 years, working directly with Stan Lee. Stan would often send me very nice notes and, sometimes, sketches. The drawings were usually of Spidey, but this one was different. pic.twitter.com/TdvGnt6n9f

So it looks like it was actually Stan Lee that invented Infinity Warps after all! And all on his own, too! Excelsior!

John Wagner is returning to 2000 AD for its special 45th birthday issue, with a new Judge Dredd story, The Citadel, drawn by Dan Cornwell. And there are

If you want to own a copy of Ghost Rider first appearance, you should check out this copy taking bids at Heritage Auctions.

Bleeding Cool has been showing you a shower of terrible comic book deliveries from Penguin Random House to comic book stores these past few weeks. The

A big Warlock key is taking bids today at Heritage Auctions and it is a really nice CGC copy. Get his key books while you can.