The Fabelmans is the most autobiographical film of Spielberg's career. A love letter to making movies, the film also gives us a more extensive peek into his childhood. While the film does drag in the middle, the performances keep your attention and are shoo-ins for awards nominations, especially Michelle Williams and Gabriel LaBelle. One of the year's best and in the top half of the iconic director's work.

The Fabelmans Made Me Hate Seth Rogen

The Fabelmans tells the story of a Jewish family in New Jersey. Burt and Mitzi (Paul Dano, Williams) take their young son Sammy to a screening of Cecil B. DeMille's The Greatest Show On Earth, and his life is forever changed. As he grows up and begins to make his own films, his parent's marriage is crumbling. Following a move to Arizona with their best friend Benny (Seth Rogen), the family then heads to LA, where the older Sammy (LaBelle) is bullied for being a Jew. He gets his first girlfriend, Jesus-obsessed Monica (Chloe East), and his parents split up for good. He and Burt stay in LA while the rest of the family heads back to Arizona, as Sammy embarks on a career in Hollywood.

Right off the bat, this is one of Spielberg's best-looking films in ages. Not that his film's ever look terrible, but this one has a hazy sheen to it, making it feel like someone's memory comes to life. It makes for a wonderful viewing experience but also takes the sting out of some of the more dramatic scenes. Interesting that he would be so open with the family issues that he dealt with and have permeated his work, but then be basically infallible from the start on set while doing said work. It feels a little weird to have him being so self-congratulatory.

Who knows how close to the truth this story is, but if it is anywhere close to the truth, it is heartbreaking. The cast he brought in to play The Fabelmans are top-notch. Michelle Williams may have earned her first statue playing Mitzi. Not once this year has a character been so frustratingly free-spirited. You want to hate her, especially when her marriage to Burt is crumbling, but she is so damn good you just can't. Dano is her perfect foil; his calmness in all situations leads to all kinds of tension. How these two met and decided to get married is perplexing but of its time. LaBelle is also fantastic as the teenage Sammy, and Rogen's Benny is maybe one of his best performances to date, even if you end up hating him.

This is Spielberg at his best. Sure, this is a softball for him, but if you asked him what it was like making this film, he would tell you it was a painful experience. For a director of his magnitude and importance to still be releasing such personal material as The Fabelmans is remarkable. After a few years of, we will say, less challenging storytelling, this film harkens back to peak Spielberg, when he challenged us and made our hearts break in the most personal ways possible. 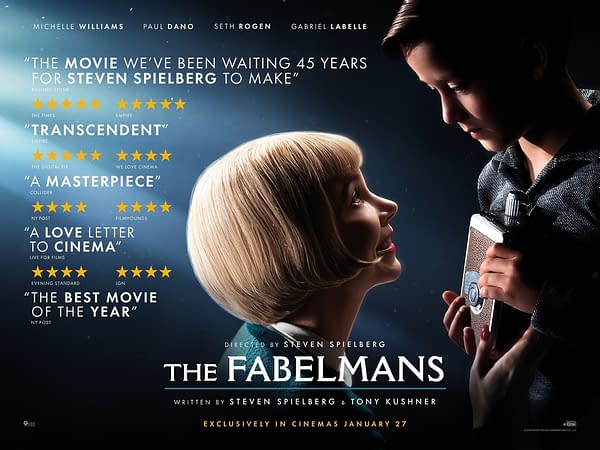 Review by Jeremy Konrad
8.5/10
The Fabelmans is one of the most personal films of Steven Spielberg's career, and one of the year's best period. Featuring a dynamite cast, this is a shoo-in for many awards this year.

DCU Projects That Are Still In Development, Now "Elseworlds"

Mattel has revealed a unique and cool Super Bowl collectible for Chiefs and Eagles fans, especially for the winning team.

James Gunn On Old DC Films: "No One Was Minding The Mint"

James Gunn did not pull any punches today when discussing the DCU projects that came before him and Peter Safran.

Nightwing Gets The Shaft Yet Again With New DC Slate

The DC film slate is here, and almost as important as what was announced is what was missing yet again, and that is Nightwing.

The DC slate is here, and James Gunn also had some things to say about the whole Henry Cavill debacle from the last couple months.

Mondo Music Release Of The Week: The Batman

Mondo is finally reissuing their release of Michael Giacchino's excellent score to last year's The Batman this Wednesday.

Keanu Reeves says there is a very "organic" reason for John Wick to be involved in the story of the upcoming spinoff film Ballerina.

MGM is kicking up the marketing for Creed III as the March 3rd release date approaches with 2 new posters, an HQ image, and 3 BTS images.

Cho-chairman and co-CEO of DC Studios James Gunn has taken to social media to ask you, the public, the most important question regarding Superman.