The only things that the two-episode season-opener of FX on Hulu's American Horror Stories was missing were someone getting a steel chair across the back or an ACME anvil landing on their heads- and I mean that as a high compliment. Because what director Loni Peristere and promising up-and-coming writers Ryan Murphy & Brad Falchuk delivered with "Rubber(wo)Man Part One" and "Rubber(wo)Man Part Two" was a brutally friendly reminder of what's kept FX Networks' "AHS" franchise thriving for over a decade. The highly-anticipated spinoff series kicks off in some very familiar stomping grounds (Murder House), but except for the occasional reference or easter egg (Tate's t-shirt, the "other doctor" Merrin Dungey's Dr. Andi Grant is working on a book with, etc.), this outing was all about writing a new chapter in "AHS" canon.

Sierra McCormick's Scarlett and her two dads (Matt Bomer's Michael and Gavin Creel's Troy) move into the infamous landmark with a plan to turn the house's history into a tidy profit flow- and in no time, the rubber suit is out, teens (and a whole lot of others) are being killed, and the "AHS" universe is introduced to a new cast of characters that left us needing to know more about what's next. At this point, we're turning on the "MAJOR SPOILERS AHEAD!" and inviting you to meet up with us after the spoiler video buffer…

As the story goes, thematically we didn't necessarily blaze new trails but that doesn't mean some trails aren't worth resisting. And if there's one thing the "Murphyverse" does well is know how to combine revenge, teen angst, and the supernatural in some twistedly disturbing ways. But what was new and refreshing (an odd word choice considering the brutal s**t we're talking about) was that McCormick's Scarlett was someone whose journey to the rubber suit was one that viewers got to ride shotgun on; we understood and could relate in some way to the decisions she made. Does Scarlett lose a few sympathy points for the non-revenge killings or her lack of sympathy for her dads getting killed? Surprisingly, no- and I'll explain why in a minute.

For Scarlett, the rubber suit was the opportunity for her to truly embrace who she really is- but who is that exactly? An ambassador of evil from Murder House piling up a body count, or someone strong enough to control it and use it? Usually, my assumption would be for the former but McCormick presents Scarlett as an alpha survivor who was forged in the fires of a ten-day childhood horror. But whichever road Scarlett travels down, we want to be there for it.

But McCormick definitely did not do it alone, and that's where I found a lot of similarities with AHS 1984 in that we're not only left with as much of a "happy ending" as the "AHS" universe can offer but also with a dysfunctionally functioning family dynamic in Murder House. Sure, they're all dead but why quibble? Bomer's Michael and Creel's Troy were some of the best-portrayed parents on television in a while. Flawed, f**ked-up, several layers of shady, and lovers of Xanax, edibles & The Crown, Michael and Troy were real parents who never had me doubt for a second that they didn't love Scarlett. Made some really bad decisions along the way? Oh yeah, but those flaws were presented in a way that allowed the viewer to do an "understanding cringe" at the moments when they knew things were going to go south in a very bad way rather than wag a finger in judgement.

Dungey's Dr. Andi Grant was the perfect voice of reason and psychiatric "lighthouse", committed to her profession even after it cost her her life. Paris Jackson's Maya and her crew were every bit the "Mean Girls" they needed to be and then some for us to feel more than okay with Scarlett making them a part of Murder House full time- and yet that personal moment with Valerie Loo's Nicole did just enough to make us feel guilty for the revenge-pleasure we felt earlier by reminding us that through all of this? Everyone has a backstory, and everyone has someone out there who will miss them.

And as for Kaia Gerber's Ruby McDaniel, let me just say that it's been a while since a character had my brain and feels all over the place- again, huge credit to another layered, intricate performance because not many characters can get away with killing some folks we care about and yet we still end up rooting for them to have their "happily ever after." And yet through all of the carnage, we couldn't think of anything more romantic and heartwarming than Scarlett's annual Halloween trips back to see Ruby, as well as Michael, Troy, Maya, and the others (yes, death does have a way of bringing spirits together).

This brings me back to my opening point involving "AHS", professional wrestling, and Looney Tunes cartoons- and what the series-opener to American Horror Stories did so well. All three of those listed involve you having to put aside your real-world sense of morality and rewire for their universe's view of things. In the real world, attacking someone in a parking lot would bring charges- but in pro wrestling, it gets settled in a Texas Tornado No DQ match. In the real world, throwing someone off of a cliff is called murder- but in the cartoons, you end up in a puff of smoke and folded up like an accordion (but live to fight another day).

The same concept applies to "AHS" but I think it's something I forgot about having gotten caught up in all of the mythology-building over at American Horror Story. But with these "bite-sized" chapters, American Horror Stories gave me a chance to stop and smell the bloody roses, a reminder that the "AHS" universe requires a different kind of mindset to live in it. The kind that understands that being killed by a ghost and forced to live in a haunted house for the rest of your existence can actually be a good thing. The kind that understands that in this universe, killing your girlfriend's parents really is an act of love and devotion. From the looks of things so far, American Horror Stories is a corner of the "AHS" universe we'll be spending a lot more time in. With the lights on. 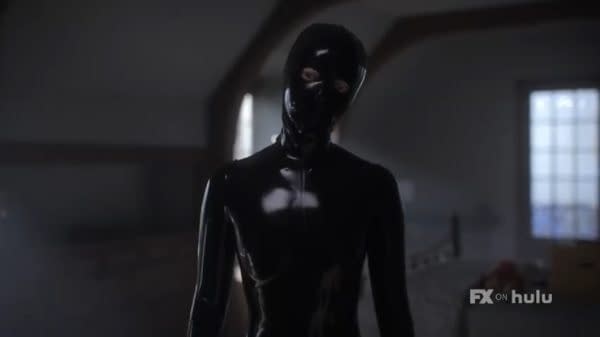 Review by Ray Flook
8.5/10
Anchored by impressive performances from next AHS star Sierra McCormick as well as Matt Bomer, Gavin Creel, Merrin Dungey, Paris Jackson, and Kaia Gerber, FX on Hulu's two-episode American Horror Stories opener was a brutally and beautifully "fun" outing that gave me a chance to stop and smell the (bloody) roses- a reminder of why the AHS universe works so well.
Credits
Network/Streamer
FX on Hulu