FOX's Bob's Burgers gave us the most relatable road trip of all time when two personality types clash, such as the existence of Bob and Teddy's friendship. This episode had a nice equal development of the two stories being told, making many moments fantastic to watch. While Linda attempts to navigate a busy restaurant with the kids, getting them to be more efficient by making it into a contest, Bob and Teddy ride together to grab a sink for the kitchen and deliver a creepy giant ventriloquist head to a mini-golf course.

The main focus was on Bob and Teddy's ventures which became a series of multiple stops and long conversations. Poor Bob, I could honestly relate to him at times. Compared to Teddy, Bob is not a big social person and probably similar to others like him gets drained mentally within moments from being too social for too long. A look at Teddy and Bob's friendship was nice to see in this episode.

What made this episode good was how I could relate easily to Bob, and when it concluded I could see the beauty and joy in how Teddy was in the world with others. Often we relate odd people with assumed loneliness or being natural outcasts, but this episode proved that's not always going to be the case. What makes Teddy, Bob, Linda, and others unique is how they approach others and how that in turn develops and continues the good in the world around them. While I loved seeing the interaction between Linda and the kids while Bob was away, it was great to see Teddy in such a unique environment special to him and him alone. It reminds me of the episode where Teddy babysat the kids while Linda and Bob attended a burger convention. Teddy is such a goofball, but he's incredibly sweet and conversational, this is something that helps his character in his own way. If pushed on Bob, this wouldn't work or make sense for him. This episode of Bob's Burgers was a great exploration of how characters can develop through clashing with one another's personalities and situations.

Episode Store & Van Titles: "Talcum In The Middle: Powders And Lotions For 'Down There'" & "Die-You-Mite!" 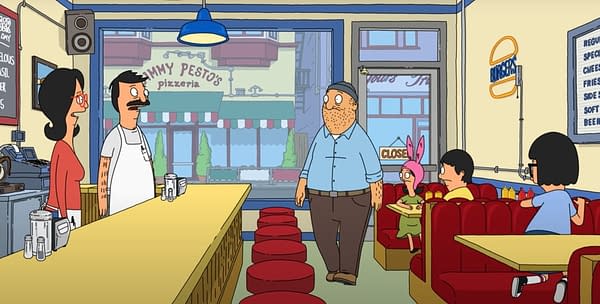 Review by Brittney Bender
8.5/10
While not a favorite episode of the season, this journey in the Bob's Burgers story contained a great exploration of Teddy's character and his friendship with Bob that many can relate to.
Credits
Network
FOX