As we close on the finale with NBC happy to burn off the eighth season of Brooklyn Nine-Nine as fast as they can with back-to-back episodes weekly for the 10-episode season, which is even shorter than the seventh season's run. The seventh episode is "Game of Boyles", which focuses on a family conspiracy, and rather than calling it a "whodunit", we'll call it the Holt variation a "Who-Has-Done-This" that involves a death in the Boyle family. Jake (Andy Samberg) and Terry (Terry Crews) travel with Charles (Joe Lo Truglio) to the family farm since the earlier has gone restless from his suspension.

As we're introduced to the family, it just felt like a rehash of eccentric, quirky country bumpkin stereotypes that only really work in small doses. It's as much low-hanging fruit for comedy as it gets with Jake and Terry along for the ride trying to make sense of the Boyle family traditions. At the very least, it provides closure for the family and arc that didn't really need it. To be honest, I would have personally preferred at least one final Jimmy Jabs episode since we're not going to get another Halloween heist episode.

The second arc focuses on the ongoing marital problems between Holt and Kevin Cozner (Marc Evan Jackson) where the Sleuth Sisters, Amy (Melissa Fumero) and Rosa (Stephanie Beatriz) find a way to get the two back together. Initially, they try to get Holt to go on a dating app. While it plays out as predictably as expected, we do get a watershed moment for the series for Ray and Kevin and it was long overdue. "Game of Boyles" is hardly a classic, but it provides another memorable moment in the series' history. The Brooklyn Nine-Nine finale airs on September 16. The series retrospective and celebration stream on YouTube for Nine-Nine Day on September 9th. 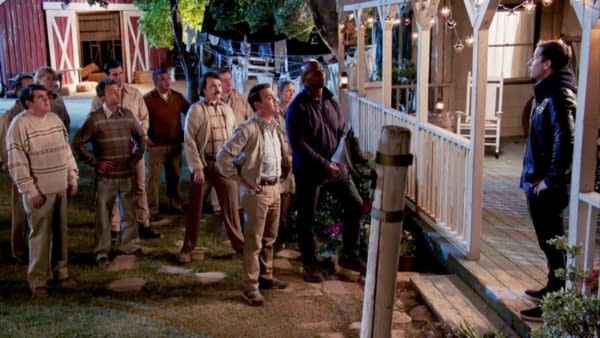 Review by Tom Chang
5.5/10
Brooklyn Nine-Nine episode "Game of Boyles" featured a lackluster main arc and superior B-arc in an average outing in a lackluster final season. The plodding Boyle farm was about as vanilla and uninteresting as it gets, largely wasting stars Andy Samberg, Terry Crews, and Joe Lo Truglio. Melissa Fumero, Stephanie Beatriz, and Andre Braugher had a more focused and more worthwhile story and it worked better for the series.
Credits
Director
Thembi Banks

Charlize Theron Thanks Arrested Development for Helping Save Career

After realizing that Aeon Flux was going to be a flop, Charlize Theron looked to then-FOX's Arrested Development for a career boost.

Star Trek: The Next Generation alum Ronny Cox discusses his return as Admiral Edward Jellico on Star Trek: Prodigy and those Jellico memes.

Warner Bros. Discovery Picking Fight with Netflix Over "The Sandman"?

Was the delay in The Sandman renewal part of Warner Bros. Discovery head David Zaslav's frustration with Netflix over WBTV getting paid?

AEW Rampage Preview: 2 Titles on the Line in Action-Packed Card

Tonight's episode of AEW Rampage will feature matches for the Regina de WAVE Championship and the All-Atlantic Championship, plus lots more.

With the series returning for Season 2 on January 15, here's a look at new preview images of the Jeremy Renner-starring Mayor of Kingstown.

AEW Revolution is coming to San Francisco in March, and it's bringing Dynamite and Rampage with it. Tickets are on sale as of today.