Growing up, I watched several police procedurals, but haven't encountered one such as Brooklyn Nine-Nine. As a sitcom, it does embrace its comedic roots drawing from all its talent, while getting serious as needed. Season eight has felt awkward for all of the wrong reasons. While the showrunners addressed how the series at its core glorifies the police given its premise, they also promised to do more grounding to reflect more contemporary social commentary. S08E06 "The Set Up" begins fulfilling that promise, starting off with how the Nine-Nine's top detective Jake Peralta (Andy Samberg) discovers a potential bomb threat to try to live out his Speed (1994) fantasy that starred Keanu Reeves. There are some spoilers for the episode.

When Holt (Andre Braugher) allows the FBI to take over the investigation and subsequently solve the case, Peralta remains suspicious and not trusting the process and does his best impression of the smart "rogue cop" to dig deeper and trust the gut instinct that hasn't failed him before. The funny thing is that despite the fact that Brooklyn Nine-Nine has dealt directly with racial profiling and police brutality, it hasn't really dealt with disciplinary action and suspension with its core cast characters. There are several police procedurals who actually reprimand law enforcement staff who go too far, but this series wasn't one of them until now.

The second arc involves Frank O'Sullivan (John C. McGinley) taking issue with Sgt. Amy Santiago (Melissa Fumero) and her pilot program for social worker reallocation, which also gave Rosa Diaz (Stephanie Beatriz) something to do in the process as an "outsider". The third is a candy-selling battle between Lt. Terry Jeffords (Terry Crews) and Det. Charles Boyle (Joe Lo Truglio) since their children signed up for the drive trying to convince Scully (Joel McKinnon Miller) to buy a box to expected chaotic results. Otherwise, the episode directed by Maggie Carey and written by Jess Dweck and creators Dan Goor and Michael Schur works within the realm of the series even if it deflates the seriousness of one of its characters in the process. Brooklyn Nine-Nine airs Thursdays on NBC. 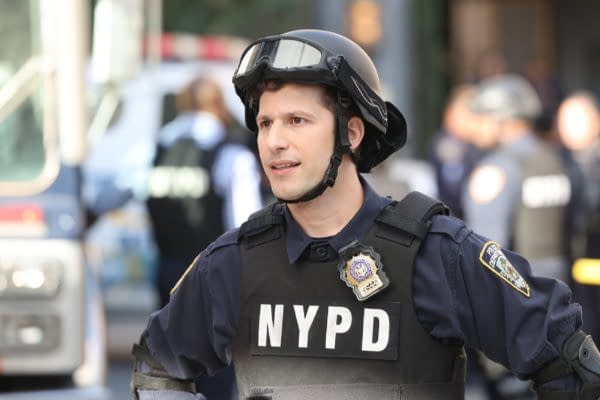 As if you needed more reasons to check out Hulu's Pam & Tommy, Jason Mantzoukas will be voicing Tommy Lee's penis. What else could you need?

She-Hulk star Tim Roth said he was "totally surprised" to be asked to return as the Abomination and discussed his meeting with Kevin Feige.