As much as social commentary affected the current season of Brooklyn Nine-Nine, guest star Craig Robinson's Doug Judy is charismatic on his own to "warrant" his own spinoff, because he's such a joy to watch especially in the latest episode "PB&J". While the bulk of the squad is sitting this one out, seeing Jake Peralta (Andy Samberg) and my favorite frienemy, Judy pair off for their last ride is one of the biggest things I'll miss about the NBC series. It turns out despite Doug's past cooperation with law enforcement, one past charge in another state has finally caught up with the Pontiac Bandit. Before he gets taken to prison, Jake calls in an owed favor so that he's the one to drive him there for their definitive last adventure.

This being Brooklyn Nine-Nine and knowing Judy's MO, things are never what they seem especially when we see his sister Trudy Judy (Nicole Byer) also involved. As per any Judy-related episode, there are the usual twists, turns, and double-crosses that you could normally expect in say a Christopher Nolan film, but as a sitcom. We get the bare minimal involvement from Joe Lo Truglio's Charles Boyle and Andre Braugher's Raymond Holt that drives the plot along, but it's definitely the classic Peralta-Judy-driven episode that we deserve. Even the one-off scene with Stephanie Beatriz's Rosa Diaz via conference works, because of their past interactions and it's wonderful how she plays it up after all the times Judy tries to swoon her.

Robinson isn't really acting per se, because his comedic persona works so well for the show. I literally want the Doug Judy spinoff to be some kind of elaborate remake of Catch Me If You Can (2002), because of the way he chews up every scene making us crave him in some heist project. Maybe the way Robinson and Samberg pair off so well together, we can get another sitcom or buddy comedy film just with these two. Let's make it happen! Brooklyn Nine-Nine airs Thursdays on NBC. 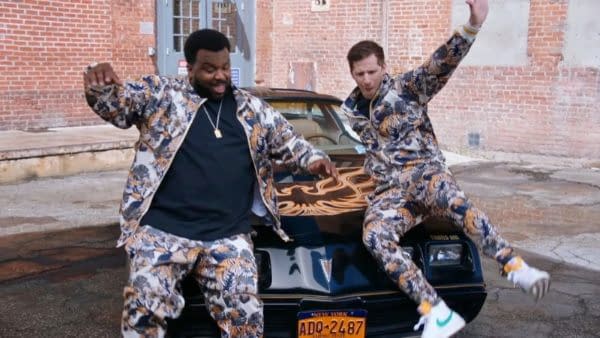 Review by Tom Chang
9/10
One of the best (if not the best) Craig Robinson aka Doug Judy episodes affords him one last ride with Andy Samberg's Jake Peralta. The way the two play off each other each time they're on screen, it would be a travesty how they don't pair together for a comedy film or a new sitcom. But it's Robinson leading the way with this episode. Director Gail Mancuso and writer Lamar Woods along with creators Dan Goor and Michael Schur deserve credit for putting this classic together.
Credits
Director
Gail Mancuso

WWE Raw: Who Won the Poker Tournament and Other Important Results

Not much happened on WWE Raw this week as the company's creative team goes into winter hibernation ahead of the Royal Rumble.