As the "Jersey Shore" roommates' Poconos resort vacation continued on MTV's Jersey Shore: Family Vacation, Angelina was finally confronted with The Presentation… and she concluded it was all J-Woww's fault. Meanwhile, J-Woww and 24 announced their engagement, Vinny got a drink thrown in his face, and The Situation turned into The Evaporation?! Find out what happened on Jersey Shore: Family Vacation Season 4 Episode 19!

Greetings, comrades! It is I, your El Presidente, once again here to talk about the greatest show on television, Jersey Shore: Family Vacation. Picking up where the previous episode left off, Jenni and Zak arrived at the resort to join the roommates for dinner, and she and 24 had a real bombshell to drop on the group: they're engaged!

Yes, comrades, I was as surprised as you are. I haven't been this surprised since I was caught unaware by a coup d'état in 2002. When J-Woww told the roomies that she and 24 "f**ked around and got engaged," you better believe the first thing I did was carefully analyze the footage to look for any evidence Jenni might be pregnant. Is that wine she's drinking out of that glass? Or is it fruit punch? Your El Presidente will get to the bottom of this one.

That will have to wait, however, because Angelina's arrival at the took center stage, especially because she brought her formerly-estranged husband Chris along for the vacation. Within five minutes of her arrival, Angelina threw a drink at Vinny in response to jokes about her marriage, with Vinny asking whether they're staying in one room or two. Soon after, Mike and Lauren, as well as J-Woww and 24, decided to leave the dinner early, aggravating the other roommates, who felt abandoned by the two people who know the most about the controversial videos of Angelina and her possible "side-boo" in Old Bridge. So much drama, comrades! It's just like the good old days!

Deena and her Chris, with Deena's mom in tow to watch the baby, arrived at the Poconos the next day, finally putting the entire cast (save Snooki, who couldn't make the Poconos trip) in one place, and they did it without stopping at a drive-thru, depriving MTV of an opportunity to capture roommates eating Burger King on camera this week. Angelina and her Chris, meanwhile, spent some time with Pauly and Nikki, becoming slightly envious of their loving relationship and vowing to work on things.

The main event of this episode of Jersey Shore: Family Vacation occurred when the roommates visited the resort's bowling alley. It was at this point that Ronnie and Mike pulled Angelina aside in an attempt to diplomatically show her the controversial videos as Pauly distracted Chris (this particular combination of boys sans Vinnie dubbing themselves Mr. P). Despite their attempts to convince Angelina they wanted only to help protect her from exploitation by the clickbait gossip media, Angelina reacted defensively to the videos.

One thing I noticed, comrades, is that Angelina has been thoroughly educated in a way that would make my own secret police proud. Remember a few episodes ago, when Angelina refuted claims she was dropping chicken nugget packages all over Old Bridge by insisting she only eats "the two cheeseburger meal," a McDonald's staple? Well, she repeated that defense this week but was sure to say "I only eat Whoppers" instead. Haw haw haw haw!

But as to the videos, which showed Angelina arguing with and threatening to key the car of an unnamed male friend or potential romantic partner, Angelina continued to deny minor details about the events while reusing to directly address whether or not she cheated on Chris, whether Chris knew about the events in Old Bridge, and whether she might have an open marriage.

Ultimately, however, Angelina decided to focus her anger on a person not in the room: J-Woww. According to Angelina, J-Woww broke the girl code by not calling Angelina privately to discuss the videos- instead, sharing them with the other roommates. Jenny caught wind of this just as the episode was ending, depriving us of a physical altercation between the two. Will that happen next week? I hope so, comrades!

Jersey Shore: Family Vacation Season 4 continues its return to form, driven almost completely by Angelina's marital drama. I hope MTV is paying Angelina a lot of money to destroy her marriage for our entertainment. Or at least funding her McDonalds cheeseburger habit. Excuse me. I mean Whopper habit. Haw haw haw haw! Until next time, amigos: socialism or death! 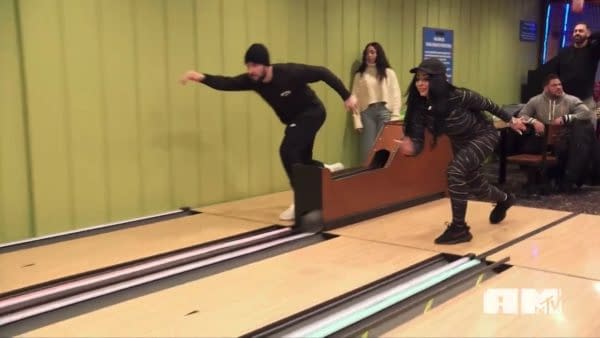 Review by El Presidente
8/10
Jersey Shore: Family Vacation Season 4 continues its return to form, driven almost completely by Angelina's marital drama. I hope MTV are paying Angelina a lot of money to destroy her marriage for our entertainment. Or at least funding her McDonalds cheeseburger habit. Excuse me. I mean Whopper habit. Haw haw haw haw!