Netflix's Murderville is the exact content the streaming platform needs and now I'm waiting for a second season already. Variety and spontaneity become best friends with this series, jumping from episode to episode while offering unique laughs each time. Will Arnett presents himself as a fantastic host to an absurd comedy full of improv and legitimate mystery. I won't give any spoilers in this review, because honestly, I need to convince you to watch this and be surprised by each episode just as I was.

Thinking about Murderville, I know that some people will have a favorite episode or at least a ranking of them in their heads. I honestly have done the same. In my ranking, the episodes from favorite to least favorite (named by celebrity guest) would be Marshawn Lynch, Kumail Nanjiani, Conan O'Brien, Annie Murphy, Sharon Stone, Ken Jeong. Now, let me explain my thoughts that led to this ranking. It was difficult deciding the favorite because both Marshawn and Kumail's episodes were fantastic and filled with individual moments that stick with me. It also is ranked a lot based on how Will and the guests interact and bounce energies off one another. Sometimes people will go with the flow and others might struggle in an awkward way with improv. It was fantastic seeing those familiar and not as familiar with this type of project to be so engrossed and interested in their roles.

From the fantastic visuals to great set-ups for jokes to be thrown in, this series is something worth Netflix's time and energy fully. Instead of having Will's character, Terry Seattle, act like a complete dick (which could have easily been the case) they instead produced comedy that poked fun at the detective's skills and obsessions in a perfect manner. We've seen this actor in absurd and iconic roles, but this is a new favorite of mine and that says a lot when Arrested Development exists. I fell in love with the personalities and with these celebrity guests brought into the mix as well. For example, Lynch took every opportunity to fully commit to every moment and it made the episode absolutely fantastic. Netflix, you have to include this man in way more content… maybe a second case when you renew Murderville?

In a recent interview about his run on the series, Lynch discussed how much he enjoyed doing improv and how excited he was about the concept in general. He explained that second takes may have happened if something wasn't gotten in a scene that needed to be but otherwise, "it was straight off the rip." Murderville has a simple formula and they've perfected it within the very first season. Every person in the show brings their best to the moment and delivers, and it's what helps elevate the show's overall concept from becoming formulaic. If this is the comedy coming out of Netflix, please keep it going and never stop. 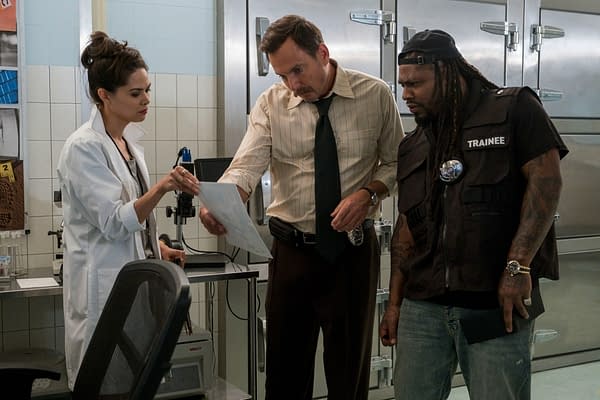 Review by Brittney Bender
10/10
Proving to be a source of comedy gold, Netflix hits it out of the park with a killer first season of the Will Arnett-starring Murderville. From the selection of celebrity "detectives" to the flexibility that the improv provides each episode, you'll be picking favorites and quoting lines from the hopefully-renewed-soon series in no time.
Credits
Production
Netflix

Check out excerpts about Lilith & Lagertha from Women of Myth, Simon & Schuster's new illustrated guide, ahead of its February 21st release.

Timothée Chalamet Wants a Big Bite Out of Apple TV+'s Apple, Too

Timothée Chalamet ponders the future of his acting career and if it will involve Apple TV+ in the latest ad campaign for the streamer.

Meet Yourself, a feel-good fantasy series that's China's biggest TV series (over 1 billion views) and could easily be a US or UK show.

The Last of Us S01E03 Review: A Heart-Warming, Soulful Dramatic Change

Departing from the game, Nick Offerman & Murray Bartlett turn in award-worthy performances as Bill and Frank in HBO's The Last of Us S01E03.