I don't think I'm going all The Wizard of Oz and pulling back any curtains when I say that phrases like "game-changing" and "game-changer" are great from a writing standpoint but have been overused to the point where they've lost a large chunk of their meaning. So I'm asking you to venture back to a time when everything wasn't either a "1" or a "10" and we actually remembered that there were numbers in-between. Because the two-episode, one-hour fifth season finale of Dan Harmon and Justin Roiland's Rick and Morty was every bit the game-changer it needed to be to deserve the title and leave viewers feeling pretty damn good about the directions that the series could venture down in the future.

From the apparent final break-up of our dimension-hopping duo (which probably would've been the healthiest thing for them) to a horrifically fatal encounter with Evil Morty, "Forgetting Sarick Mortshall" (directed by Kyounghee Lim and written by Siobhan Thompson) and "Rickmurai Jack" (directed by Jacob Hair and written by Jeff Loveness & Scott Marder) not only addressed the key theme flowing through this season but also planted its flag firmly & definitively on the hill we call "storyline canon". So with that in mind, we're throwing on the "MAJOR SPOILERS AHEAD!" sign and throwing down a spoiler image buffer because we're about to do a deep dive into what went down.

First, props to directors Lim & Hair and writers Thompson, Loveness & Marder for crafting two excellent episodes that function on their own yet were rightfully paired up because they truly are two halves of a much greater hole. Now with that said, we're going to approach the finale by looking at those halves to see how (much like Rick and Morty) they are dependant upon each other to work as well as they did.

"Forgetting Sarick Mortshall": It's only fitting that it would take a "crow war" and sociopath with a dimensional portal in his thigh to finally bring Rick and Morty back together- but this was different. As big of a fan as I am of the "wacky adventures," this one left its mark. For Morty, it was understanding that even the best of intentions need to be tempered with some healthy cynicism & knowing when to dial back the forgiveness when forgiveness isn't warranted. For Rick, it was the realization that he will always be alone if he can't learn to respect those who choose to travel by his side. Think of it as Doctor Who if the Doctor needed to be reminded to give a crap about her companions.

Because if there was one clear message here, it was that the dynamic between Rick and Morty had gotten too toxic and resentful to go on. Something had to give. Even Rick realized it. But it wasn't something that could be fixed by them being together. So even though it broke his heart, Rick's leaving was (this time) the most "loving grandpa" move he could've pulled. Rick is a tornado that leaves a ton of damage in its wake, and this is that rare time when it was laid out for as deep of an examination as we got here (and in part of "Rickmurai Jack"). We see it in the clean-up missions that Morty's been going on, and in the looks at Mr. Poopbutthole and "Garbage Goober's" lives- folks who can't break their "Rick-diction" no matter how much it costs them.

"Rickmurai Jack": And yet, it made perfect sense the way the two reunited at the start of this episode. Did we think it felt rushed at first? Yeah, we'll own it. But talking out the episode with a friend, I realized that's usually how it is with unhealthy pairings. They're looking for any excuse to get back together (even as shady as their respective ways of getting back together were)- and if it looks like both are legitimately working to make things better? Even sooner. And in this case, that's a good thing because as much as we've been preaching about it all season? This was the moment where canon not only started to matter in a big way but also opened the series to a ton of exciting storyline potentials for what is reportedly a Space Beth-heavy sixth season.

Because we did not see President Morty aka Evil Morty coming, and by the time he was done? He left Rick and Morty with a painfully uncertain future and viewers with a ton of new canon intel to sift through and sort out. As a result of a brain scan from the first season, Evil Morty has figured out a way to bring down not just Ricks, Mortys, and the Citadel. He has his sights set on the Central Finite Curve, a walled-off slice of the multiverse where Rick is the smartest man alive. Because as Evil Morty teases when he reminds Rick about his past, his move to eliminate all of them and their access to portal gun fluid vibes intimate & personal on so many levels. Evil Morty knows this Rick in ways Rick's not realizing, knowing Rick's moves and seemingly having a response every time- like he's always one step ahead of Rick. And even as Rick and Morty head out into a portal gun fluid-less future (doesn't someone have an extra one lying around) of uncertainty, we can't help feeling that Evil Morty walking into that golden portal marks the end of a beginning of some type. But what?

And while this topic will definitely be broached in further detail in a future post because there's a ton to dive into, what about all of that Rick backstory viewers were fed? It turns out Rick's wife and daughter really were killed by an "Evil Rick" (as referenced in Season 3 opener "The Rickshank Rickdemption") and that Rick used the portal gun tech to hunt down the killer. Though going vigilante on quite a few Ricks in quite a few dimensions, our Rick would never find the killer (Evil Morty?) but would strike a deal with the other Ricks to create the Curve as well as the Citadel as a base to monitor it from.

Need more? How about the fact that Mortys are manufactured by Ricks by guaranteeing in each dimension that Jerry and Beth end up together (whether they realize they want to or not)? Not content to give us some dire in-the-moment cliffhangers, Loveness and Marder effectively went back to fill in just enough blanks to shake up the status quo. How will Jerry and Beth react when they learned they were programmed to be together? How different do the past five seasons look now that we know where Rick's aversion to personal attachments comes from? And what are the final revelations that Evil Morty's holding on to? Bring on the sixth season, and congrats on the creative team behind Rick and Morty finding ways to breathe exciting new life into a series that's already five seasons into its run. 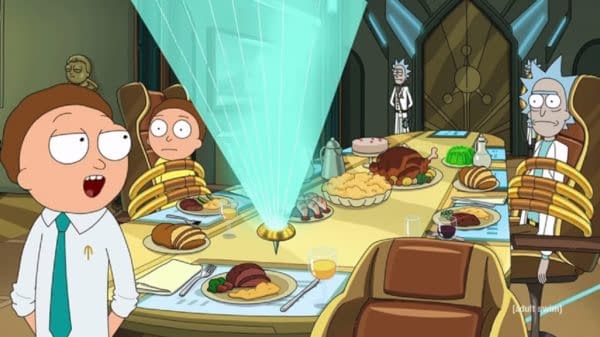 Review by Ray Flook
9/10
I don't think I'm going all The Wizard of Oz and pulling back any curtains when I say that phrases like "game-changing" and "game-changer" are great from a writing standpoint but have been overused to the point where they've lost a large chunk of their meaning. So I'm asking you to venture back to a time when everything wasn't either a "1" or a "10" and we actually remembered that there were numbers in-between. Because the two-episode, one-hour fifth season finale of Dan Harmon and Justin Roiland's Rick and Morty was every bit the game-changer it needed to be to deserve the title and leave viewers feeling pretty damn good about the directions that the series could venture down in the future.

Chrissy Teigen's 2019 three-word description of Donald Trump was a hot topic during a House of Representatives Oversight Committee hearing.

With the final season kicking off tonight, here's a look at the official key art for The CW's The Flash Season 9, honoring "The Final Run."

Tony Khan is hoping for more money from AEW's media rights negotiations later this year, and The Chadster is just so cheesed off about it!

We have a positive update to pass along regarding the condition of WWE Hall of Famer Jerry "The King" Lawler, who suffered a stroke yesterday.

Spitting in the face of WWE and WrestleMania season, AEW Dynamite tonight will be a special "Championship Fight Night" edition. Auughh man! So unfair!