We're just like you: we can't believe there's still two months to go before Amazon Prime Video's adaptation of Garth Ennis and Darick Robertson's comic book series The Boys leaps the big streamer in a single bound on July 26th. One silver lining out of the wait: it gives us some time to do a little "homework" to get caught up on the major players in executive producer-showrunner Eric Kripke's upcoming series.

So far, we've gotten a glimpse at the marketing machine that is The Seven…wow! We've also gotten a look at The Homelander (Antony Starr), Annie aka Starlight (Erin Moriarty), aquatic hero The Deep (Chace Crawford), and Amazonian-warrior Queen Maeve (Dominique McElligott)… but what about the rest of the team? We haven't really gotten a chance to get to know them as individuals… as people.

As we can see from the two newest videos profiling The Seven –  for Jesse T. Usher's speedster A-Train and Alex Hassell's see-through hero Translucent – there's good reason Vought's been avoiding any kind of real press for "America's Favorite Super Hero Team": turns out they're righteous a-holes.

(Spoiler? Bleeding Cool was able to make the screening, and you can check out our two-scoops-of-spoilers filled thoughts on the series' start here.)

Here's a look at two recent teasers for The Boys, with the second one being a particularly eye-opening, NSFW one: 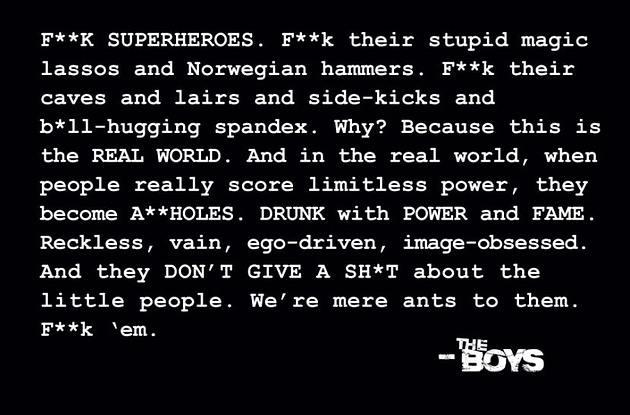 On the flip side, The Seven are Antony Starr (American Gothic) as The Homelander, leader of the main superhero team, The Seven; Dominique McElligott (The Last Tycoon) as Queen Maeve, Amazon-warrior member of The Seven; Chace Crawford (Gossip Girl) as The Seven member The Deep, an aquatic hero; Jesse T. Usher (Survivor's Remorse) as speedster with a major PR problem, A-Train; Nathan Mitchell (iZombie) as Black Noir, a masked superhero with fighting and Set martial arts skills; and Alex Hassell as perverted invisible hero Translucent (who's not really…you know… "translucent").

Erin Moriarty (Jessica Jones) joins the cast as Starlight/Annie, a young woman who can make lightning bolts flash from her eyes and dreams of being a "real superhero" like the famous Seven; Elisabeth Shue's (CSI: Crime Scene Investigation, Karate Kid) super-hero handler Madelyn Stillwell is the Vice President of Hero Management for Vought and the person responsible for cleaning up after the "heroes." Jennifer Esposito (NCIS, Blindspot) has also been cast in the recurring role of CIA Agent Susan Raynor, with Simon Pegg (Shaun of the Dead) set as Hughie's father and Billy Zane (Titanic) also set to make a guest appearance this season.

Peacemaker: Batman Joke More Like "You Are What You (Don't) Eat"

Peacemaker series creator James Gunn still doesn't know why DC had an issue with THAT Batman joke. Maybe they're still a little sensitive?