I'm Mike Hogan, in line at the Editors on Editing panel at NYCC.

I'm expecting a few mentions of DC editorial, but I hope the panel will cover other topics as well.

No one from the Big Two is here. No drama expected.

Leave any questions in the comments.

Buddy Scalera is explaining his comic pro and geek cred.

Ryall is working on a possible new submission process. He says it's tough. They start writers on backup stories, small stuff. Keep your attachments small, guys. Start with a little bit, a teaser.

Allie says do a bunch of work. Your first work probably would not be good. Get it out of your system. Start small, eight page stories, do a lot of work.

When you have that group of small works, use that.

Allie's retelling a submission horror story with someone who submitted a Buffy story with bad dialogue. He says maybe Avengers can have bad dialogue, but Buffy can't.

Ryall says tailor your pitch to the publisher. Boiler plate submissions are ignored.

Simons worked for a resume site, so he's familiar with job placement. Don't approach with a story to "fix" something. No one's going to hire you to fix the Avengers. Don't submit scripts, send finished work.

Ryall cares more about lettering than art. It can make the writing seem worse.

Allie says you can't learn how to write comics until it's drawn. 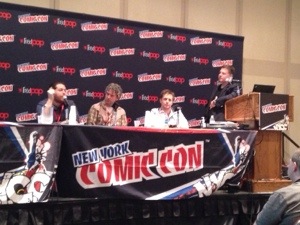 Simons says no one wants to teach you how to write. You should show you can write.

Allie doesn't listen to pitches at conventions. It's impossible to absorb in conventions.

Get feedback from pros, but also learn from your peers.

Simons says he can't legally listen to pitches without a legal form signed.

Simons says Clay Mann would draw on the FedEx boxes with submissions to Marvel to make them stand out.

What works with one company might be terrible for another. Tailor your pitch.

This turned into how to submit pitches right off the bat. Not what I was expecting, but I shouldn't be surprised.

Simons says quality over quantity. Do a lot of work but don't do tons of bad work.

Ryall turned down an art submission and received a scathing response. Mind your temper.

Simons says have a thick skin. Be aggressive but also patient.

Sorry guys, a lot of this is obvious. Don't call an editor racist, don't insult editors. I feel bad for anyone in this audience who doesn't know this already.

Editors work hard, they're incredibly busy. Artists and writers need to communicate with their editors. Shades of Templesmith, right?

The Game of Thrones panel is nearby, I think. Tons of noise.

Pretty sure no one has mentioned anything about actually editing yet.

Great question from the audience, how do you become an editor? The whole panel says don't. Join the Army.

Another great audience question. When did you realize you could support yourself as a comics pro?

No one has really answered the question yet, all stories about breaking in. Ryall's first comics job was with IDW, Simons started with Marvel through Monster.

25 minutes left. Kind of worried that I have to be the guy to ask about DC. I don't want to be that guy!

Another question about breaking in. So great that so many people want to be comics pros, but I think they've answered this question four times in different ways.

People who want to be editors should send resumes as much as artists send samples.

In choosing interns, they look for people in school who have a focus on comics or lit, not just mathematics.

What happens when a deadline is missed? Allie says it's troubleshooting. Sometimes it's with the wait, like Locke & Key as Ryall points out. Simons says you should still do whatever possible to hit deadlines.

Allie reiterates that late shipping does proven harm to sales.

Wrapping up. Learned some cool stuff but I wish the majority of the panel hadn't been wasted on breaking in.

Scalera denounces pirating. Asks the audience to say no to stealing, buy some books.

1940 was Blue Beetle's year, with the launch of his own series, a newspaper strip and a radio show which combined to create a new origin.

Fox's Fight for Electro in Science Comics, Up for Auction

Mystery Men Comics #3 is best known for its Lou Fine cover, but what does it have to do with William Peter Blatty of The Exorcist fame?