Once upon a time, Jason Todd, then-Robin, died at the hands of The Joker. In Red Hood: Outlaw #40, with a revived-and-rebooted Red Hood, it still smarts.

And yes that was a rather specific job to make sure none of them are beaten to death with a crowbar. While he is carrying a crowbar on his back. Because of course, back in the day… 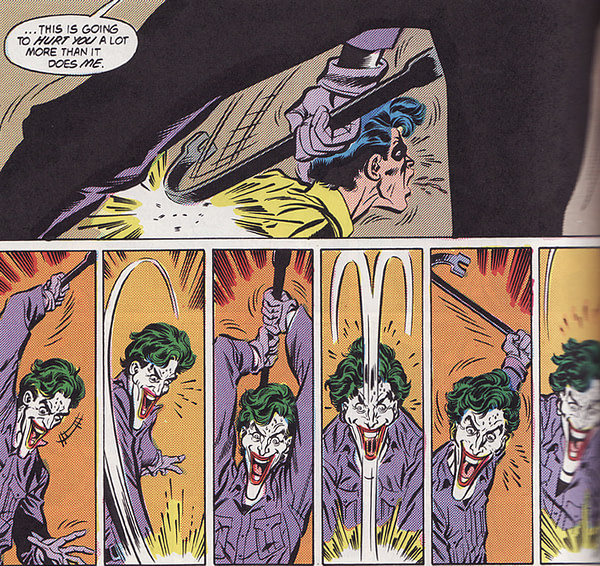 …that's how he died. And all because a) he disobeyed Batman who told him to wait and b) Batman failed him. You get to pick. In today's Nightwing, however, The Joker has moved on…

…and a different Robin is in his sights.

Same crowbar? While in Batman #89, out today…

Well, he knows everyone's names at least. And doesn't get tied down in the Dick or Ric debate either. The Joker War is going to get very personal indeed.

NIGHTWING #69
(W) Dan Jurgens (A) Ronan Cliquet (CA) Travis Moore
Following the events of October's Night-wing Annual #2, Ric Grayson is getting closer to the truth about what happened to him. Talon has been vanquished, but his interference has put Ric on the trail of other members of the Court of Owls. Have they been taking advantage of his injured state from the beginning? And what does that mean for the life he thought he lost?In Shops: Feb 19, 2020
SRP: $3.99

BATMAN #89
(W) James Tynion IV (A) Guillem March (CA) Tony S. Daniel
Batman must stop Deathstroke from killing the mayor of Gotham City! But to do so he has to figure out who ordered the hit in the first place. If his four main suspects aren't 'fessing up to the crime, then is there someone even more sinister lurking in the shadows waiting to deliver the coup de grâce? Whoever it is, one victim will fall under their attack!In Shops: Feb 19, 2020
SRP: $3.99

Nightwing #69 and Batman #89 are published by DC Comics today in all good comic shops. I bought mine from Piranha Comics in Kingston-Upon-Thames. Piranha Comics is a small south London comic store chain with a small south-east store in Kingston-Upon Thames's market centre, which runs Magic The Gathering nights on Fridays, and a larger south-west store in Bromley, which also runs Magic nights and has an extensive back issue collection and online store. If you are in the neighbourhood, check them out.

In previous Wildstorm gossip, Bleeding Cool reported on the new makeup of the upcoming Stormwatch superhero team. And that it would include Core – Pavlov

Who Are The New Members Of The Justice Society Of America? (Spoilers)

In May 2021, Warner Bros. stated that a sequel to the movie Joker was in development. In June 2022, the sequel was officially confirmed to be in

Goat Magic is a graphic novel by Washington Post and The Nib cartoonist Kate Wheeler, pitched for fans of Wolfwalkers and Mooncakes, about two girls on an

Learn the secret origins of Heartless in this preview of Nightwing 2022 Annual #1, in stores Tuesday from DC Comics.