With a huge, splashy finale full of gigantic visual spectacle worthy of a Marvel TV series, Mister Miracle #6: The Source of Freedom closes down this ambitious mini by settling all the questions that have lingered since the first issue. Likewise, this issue provides growth for the title character in understanding himself, thus embodying the subtitle of the work.

The main antagonist N'Vir Free has been an enigma since the start of this work — a Mother Box powered bruiser claiming to be the child of Scott Free and Big Barda, attacking Shilo Norman for not living up to her ideas of the Mister Miracle mantle. In this issue, we find out that, like the CIA providing the material assistance that made Bin Laden possible, N'Vir plays an inadvertent role in creating the problem she seeks to eliminate. Her Apokoliptan Fury methodology is as much a part of the problem as it could be part of her solution. Brandon Easton's script pulling this off was very clever and at a very high degree of difficulty as well. When you toss in some fun references (not just the movie one, the great final line) and the great final act surprise, which leads to the story's resolution, it's an earned emotional moment of triumph that connects strongly.

It could be fairly said that the visuals provided by Fico Ossio, Rico Renzi, and Rob Leigh are on the "busy" side — it's Kirby inspired, yes, but the effects and chaos of a future aflame take some focus to follow. It's worth it to find the gems in this story.

Shilo Norman is a more mature and well-prepared hero for having gone through this gauntlet. For the reader, this is a solid closing to a definitive storyline for the character. RATING: BUY.

Mister Miracle #6: The Source of Freedom
By Brandon Easton, Fico Ossio
Final issue! Shilo's Greatest Escape! Shilo returns to where the story started — the future! With the help of Oberon, Shilo travels to the revolution that sparked N'Vir's mission in the first place, hoping to end this conflict with N'Vir once and for all. But there is more to this revolution than Shilo realizes. Who really sparked the revolution for the Miracle mantle?!

Mister Miracle #6: The Source of Freedom 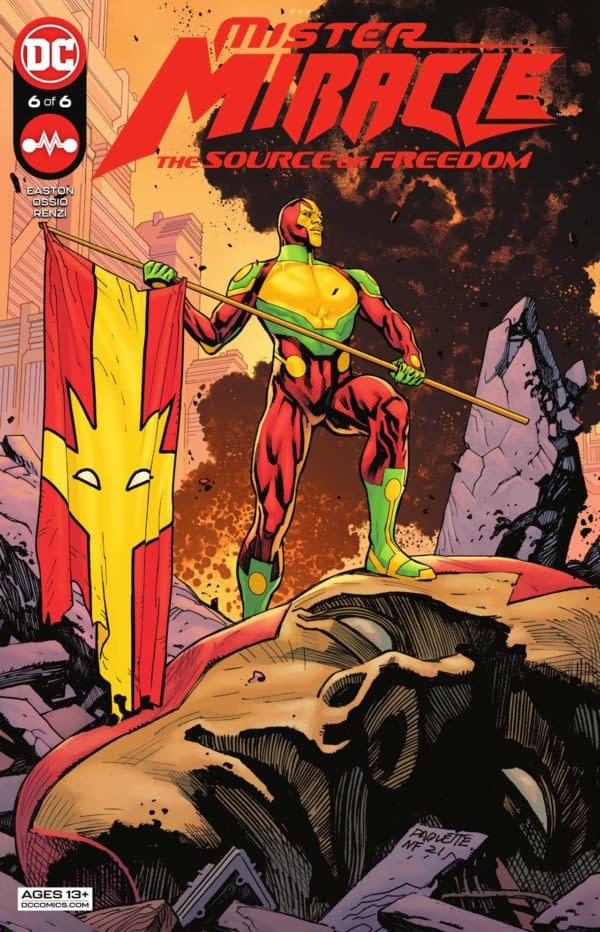 Review by Hannibal Tabu
8/10
Like keeping the audience on the edge of their seats with bated breath, the final escape of Shilo Norman is, in fact, the most spectacular yet.
Credits
Editors
Mike Cotton, Diego Lopez, Michael McCallister

Bleeding Cool has only just reported that Josh Hayes has joined as Boom's Vice President of Sales after more than 15 years at Diamond Comic Distributors,

Boom Studios has announced a number of new hires and promotions within the comic book publisher. Josh Hayes has joined as Boom's Vice President of Sales

Yesterday, when much of the USA has a national holiday, the Penguin Random House website for comic book stores decided they wanted a slice of that action

When Brian Stelfreeze recreated the Nightwing design for DC Comics over twenty-five years ago, he added "finger stripes". A design with blue lines going

At the end of last month's Superman: Son Of Kal-El #6 by Tom Taylor and John Timms gave a better look at President Henry Bendix of Gamorra's plans to be a