A mysterious gangland murder brings out the worst in many people in power, and Newburn #7 is here to throw the plot twists at you fast and furious. When a special set of circumstances isn't enough to make everybody play nice, things can get messy on the playground of New York's streets, and virtually nothing is what it seems.

The former cop with the titular name has a deal with every crime family in New York City to help maintain the uneasy peace between them. The problem (for him anyway) is that he's picked up a new apprentice, and said new apprentice has a history with some of those crime families in the city.  This, of course, leads to some twists and turns when a Yakuza crime boss is killed in his home, and the story in Newburn #7 does quite a bit to manage intimate tensions.

Writer Chip Zdarsky has turned in a wonderfully mean-spirited crime drama with real teeth and layers that peel back from the story like an onion. The visual storytelling from Jacob Phillips and Toben Racicot brings each moment to vivid life. A solid black-and-white segment of a backup story called "Spook-O-Rama" shows a bit of juvenile detective work that feels like it would be better served as a single story and not backups.

Nonetheless, the entire package presented here is entertaining, and the lead story surely has an absolutely jaw-dropping conclusion. Newburn #7 builds up another noirish smash hit that is 100% worth a read. RATING: BUY.

Newburn #7
By Chip Zdarsky, Jacob Phillips
The murder of a Yakuza boss could send the criminal world into chaos if Newburn can't find the killer before the cops do. PLUS: in 'SPOOK-A-RAMA' from GILLY and LEE, Ronnie tries one last time to get justice for Veda's murder. 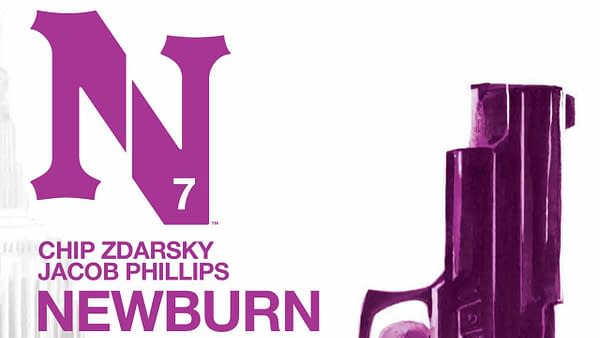 Review by Hannibal Tabu
8/10
Who’s got the nerve and the ability to kill a Yakuza boss in his own home? If the titular character doesn’t find out, the city of New York might tear itself apart.

When it brains, it pours! Celebrate stories featuring everyone's favorite interdimensional warlord in this preview of Teenage Mutant Ninja Turtles: Best of Krang #1.

Super-American refuses to listen to the truth in this preview of Vampirella vs. Red Sonja #4... can he be convinced before it's too late?

The ponyrific adaptation of Little Women continues in this preview of My Little Pony: Classics Reimagined - Little Fillies #4.