With developments rising from personal stakes to pulse-pounding action, Superman: Son of Kal-El #11 does a fantastic job balancing all the elements of the young hero's life, even when he's not on the panel. With the clarity and simplicity you need from a Man of Steel, this is the Superman we need right now.

Batman has taken Lois Lane, Ma, and Pa Kent, and the young Jon Kent to a Justice League safe house because the very Luthor-esque president of the super villain nation Gamorra, Henry Bendix, has marked them all for death. Batman has also said that Jon's new boyfriend is (in essence) a terrorist who can't be trusted. Here's what's great — by using the strength of character he developed in part from following the example of the world's greatest hero, the values imparted by a family that's focused on a kinder world, and the sound advice of good friends, Jon Kent makes some great decisions with fascinating developments. Along with some great moments from supporting characters, Tom Taylor's script does everything right, and the artwork from Cian Tormey, Federico Blee, Matt Herms, and Dave Sharpe lets you have a seat knowing that you will only need the edge.

There is one funny demand at the end — like asking the fry cook at McDonald's to go back there and bring you a duck a l'orange — that strains credulity. That's not a ding against the book; it's more a logical progression of the narrative that shows you why one side should win and why the other clearly should not.

This is an enjoyable, personable work that delivers effective character moments (you may have seen the Batman/Pa Kent bit floating around the social media circles). While the genre tropes may demand certain outcomes, the ride getting there is enormously enjoyable. RATING: BUY.

Superman Son Of Kal-El #11
By Tom Taylor, Cian Tormey
Jonathan Kent has faced many challenges in his life as both Superman and a Super Son, but what will the first son of the Last Son of Krypton do in the face of…metahuman bombs? Jon faces a deadly decision and Lex Luthorâs alliance with President Bendix deepens in this penultimate chapter of The Rising Saga! 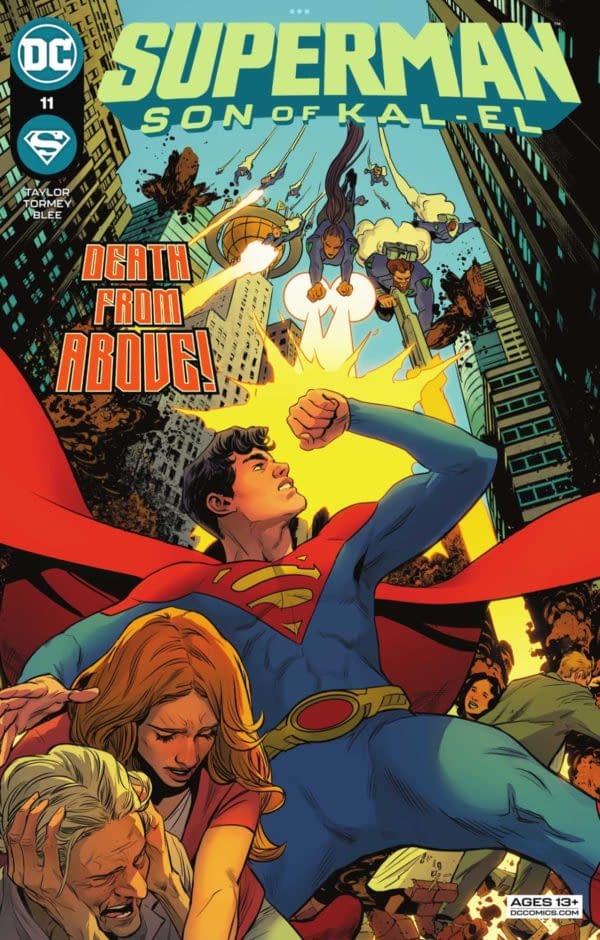