We talked about Denver comic book retailer Dennis Barger's experience at the recent Diamond Summit in Las Vegas, where he called out Mark Waid specifically, also ran Waid's response. Well, it seems that the other shoe has now dropped. Barger posted to Facebook the following account of events.

Ok so "apparently" it's official Diamond Comic Distributors is officially banning me from attending any and all diamond events through 2020. I'd give you more details but they are refusing to give it to me in writing. The "stated" reason for this is officially only because I shared pictures shown to retailers by Funko Joe at the retailers summit maliciously. (Despite the fact that I gave up no rights to obey all oral orders given to me by presenters)

So let's dig in. On Monday May 20th during the summit, right after meeting Todd McFarlane and then right after Mark Waid threw a comic at me and shoes me away from the humanoids booth. Roger Fletcher svp of diamond comics walks by me and calls me an "asshole" (again) in front of fellow retailers (George Chase and others) in public. He's walking away and can't be bothered to back that up. So when I see him about 30 minutes later I asked him wtf he was pissed off about now. Now I love roger, I think he's cool, but man does he get butt hurt easy. I once mocked a super long boring DC presentation after dinner of a marketing survey by saying "riveting" over and over again as we were finally free to leave . He took umberage over this mocking and called me out for being "an ungrateful prick".

Another instance in Baltimore after requesting a new box be looked into several years in a row to no avail, I filmed myself dropping a box of beat up comics in front of him at Baltimore to the roar of retailers support. He followed that up by simply saying "f-ck you dennis" to me loudly while I was talking to fellow retailers.

The next time was in Chicago where after asking once again that diamond report positive credit for retailers repeatedly I asked again on video and this time he walked up to me after the q&a to compliment me on raising my kids good (who I brought with me to this summit) (odd) before calling me an "ass" for calling diamond out again during q&a in front of my son.

(Important side note) this would be the last time Diamond would have a retailer q&a at a summit, which he confirmed this year was entirely because of me. Diamond no longer will tolerate retailer complaints at summits because they can't handle Dennis, repeatedly giving them the chance to answer retailer complaints, by dismissing it, saying we will get back to you, never contacting you or doing anything and pretending it's a new complaint the next year and doing the same.

So let's skip finally to this years vegas summit. The tone deaf summit held at the $300 a night planet Hollywood hotel for comic retailers who almost every presenter knowledged, just went through one of the worst years ever. Not attached to any comic event, this stand alone summit stretched from Friday to Monday, 3-4 hotel nights in a town notorious for sucking you dry, all to help retailers make more money (so they can afford to go to more summits apparently). 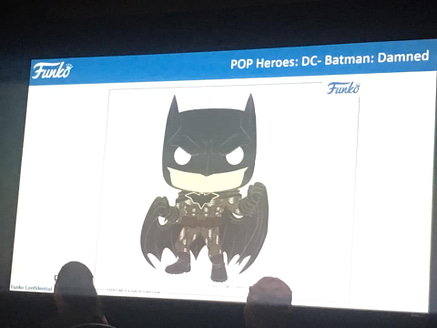 So after Roger insults me for the 4th time in front of other people I confronted him. A heated argument ensued. Many things come out especially Rogers deep seated hatred for me at summits, he explains he likes me basically but hates me at summits. Not in any particular order he accuses me of, only going to humiliate Diamond, only making videos to get online attention, telling me all the people at the summit despise me, publishers, presenters, fellow retailers and diamond staff, everyone apparently. He repeatedly asks me "why do you even come to these?". He also is pissed I skipped the fabulous morning presentations of diamonds fabulous products during breakfast. Well considering I stayed at a cheaper hotel away from the summit (circus circus) to save money and had a 1/2 hour uber ride in that morning I don't need to hear diamonds sales pitch, or any sales pitch to separate retailers from their money. This went on for maybe 15-30 minutes, up and down in hostility levels, I brought up the Waid debacle and he brought up that his staff sent him 4 emails of my social media posts from the day before including the Funko post, the "this industry is fuqqed" post and two others he didn't elaborate on. Yes diamond trolls my page to send to daddy for punishment. No mention of my enthusiastic posts about Marvel, idw, mad cave, source point, image and spawn 300, DC even, just 4 negatives. I bring up the litany of past diamond transgressions. The olive branch thieves I caught that diamond never dealt with (yeah thats a whole story I haven't even talked about)(until now), the box damages, the credit issue, the missing products, numerous things!!! Nope just the negative of showing them up. That's fine I know what I'm doing, you get the carrot several times til I have to give you the stick. Damn whoever can't handle that, I gave you plenty of chances.

But two weeks later they have meetings between the brave Chris Powell and roger fletcher and those courageous heroes have my friend call me to tell me I'm barred for a year and a half from diamond events. It's too kind to call these feckless elitists cowards. They are tyrants who wield unlimited power over an industry and rule with an iron fist over anyone who dares defy them. It might be different if we were in the steak and Champaign point of this industry but we are currently in the full speed ahead into Icey oceans point.

So what am I going to do about this? I'll just be a good boy and cowtie to the powers that be, hah!!! Not a chance.
First this gets handed over to my pit bull lawyer, second financial punishment. I changed all of my business from diamond t-mailers to Gemini mailer over the repeated damages years ago. So effective immediately I will cancel all dst toys and statues, no further orders of those products. Not hard, most of it gets sold at wholesale cost on amazon prime anyways or clearances out for nothing twice a year. #thanksdiamond, no bottle openers, pizza cutters, apparel. That's all done. I'm going piss so much into the tent the stench will make the tent empty out. Retailers need to be diamond independent ive been saying that for years. 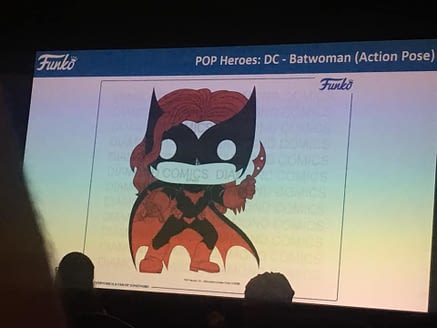 Diamond seriously needs to take a long hard look at themselves, are they being a "good Shepard" of the industry they control? No
Diamond says I need to change the way I complain, I think they need to change the way they fix, like actually starting to fix it, not run the same old tired "buy more" speak up less attitude that these summits have been for the 14 years I've been going to them.

So Dirk Wood, sorry you won't hear DIRKKKK when you go up on stage, Filip Sablik and Ross Richie No BOOM! From the back of the hall, Mad Cave Studios, Source Point Press, AfterShock Comics, Devin Funches Jeremy Atkins and Lion Forge and all my other boys that I enthusiastically support at these summits. Diamond can't handle the tough questions I ask and they'd rather have the sound of antsy retailers waiting for their variants drowning out your presentations than a Shhhh from Dennis that comes with a tough question at 9am the next morning.

I doubt they've ever barred any retailer before, and I'm sure they'd never consider barring Mark Waid for throwing a comic at me. But this is what they think will help them maintain control.

Lots more to come I swear and promise ;)

Don't worry, they have merely struck me down and made me more powerful than ever!!!

Just to repeat, Mark Waid denies he threw a comic at Dennis. Amongst the responsesnto Dennis was former Diamond executive and familiar name to Bleeding Cool readers, Bill Schanes who told Dennis,

I would suggest you try a different approach. I retired from Diamond just about 6-years ago, and while I can no longer speak on behalf of Diamond, I find most of your tactics less than constructive (just my opinion). Public shaming seldom gets results

The credit reporting issue started 8 years ago, still only one person EVER addressed it back with me unofficially and that was we won't ever do it because it might hurt deadbeat retailers in arrears.

As someone who spent over 45-years in a professional purchasing position, I always found it best to work behind the scenes. At times, it takes longer than I might have liked it, but I earned a reputation for bringing up topics which retailers had brought up to Diamond, and of, topics which I felt weren't fair to retailers, even though I was also an advocate for the publishers/suppliers to the industry. Just my style – others may vary.

I'm going to give tough love, because I absolutely adore Dennis L Barger Jr. You could tone it down a bit at the summits. Sharing the Funko stuff is a dick move. I know tons of people at Diamond absolutely adore you & probably feel awful. Apologize. Tell them you'll be better. They'll let you back in. Attack on your own time.

With Dennis doubling down.

First I get it but you push me I push back, you ignore me I will make you not ignore me. I've brought up the abusive relationship with Funko several times. Oh hey your money is good 51 weeks a year but not at this convention or that even if you jump through our hoops. For them to walk into a summit thinking they have clean hands is obscene to me, and harmful to fans like you who work shows with me (now on two occasions) these last few summits Funko doesn't address those and as they loose venues like Hastings, loot crate and most mass retailers cutting back they come to us with more and more stuff to make up for slowing sales elsewhere. So yeah I could have done this better, sure I could have been more polite. But then again their staff at cons could have had better responses for me over 5-6 years of walking up to their booth than, "oh you're a retailer/exhibitor you're not allowed to buy from us". And that has been brought up to Funko at summits before in person politely.