This is weird. The closest I have come to see this play out in real-time previously was when Ike Perlmutter cancelled the Fantastic Four comics and deprioritised the X-Men – and got rid of all FF and X licensing and promotion, as part of a fight between Marvel and Fox Studios. Week after week, they were removed from posters, trading cards, statue lines, game extensions, toy lines, all the time Marvel folk officially denied any of this was happening (though privately they were fuming). 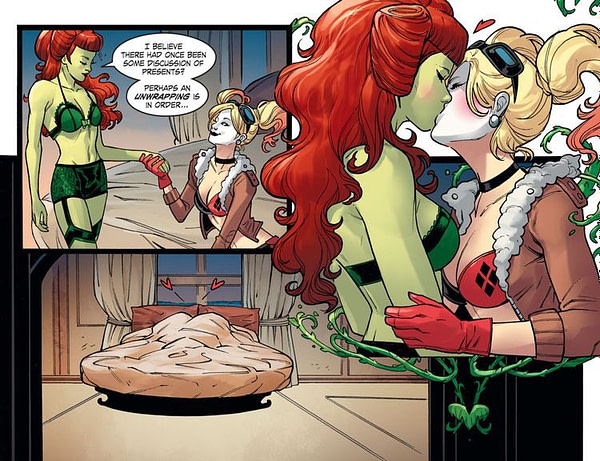 We've looked at the portrayal of Harley Quinn and Poison Ivy as a couple, as DC were pushing the Birds Of Prey And The Fantabulous Emancipation Of One Harley Quinn movie. Portrayed as a non-monogamous romantic couple for years, the relationship was removed from the Harley Quinn series around 6 months ago without note. Then the Harley Quinn & Poison Ivy mini-series portrayed them more as a Thelma And Louise couple, and concluded with a page-splash peck-on-the-forehead that screams out that it was redrawn at the last moment.

And now? Well, this is how DC media partner Nerdist exclusively announced on February 7th, a new Harley Quinn and Poison Ivy statue by Emanuela Lupacchino and sculpted by Jack Mathews, in a post that will have been approved by DC PR.

Or if you are the comic book fan in need of a Valentine's treat this year, this gorgeous piece—the first official statue featuring a same-sex couple—couldn't be a better way to treat yourself.

We all know Valentine's Day is usually about celebrating love, and these two characters know what it means to be there completely for someone else. They're the epitome of what it means to be a loyal best friend above all else and always a shoulder to cry on in times of need. Whether it's Harley's horrible break-ups with the Joker or her wanting to prove herself as an independent woman, Ivy is always there for Harley to be her number one support. Likewise, as she's demonstrated in their recent Harley Quinn and Poison Ivy miniseries, there's little Harley won't do for Ivy, including taking on the likes of the Floronic Man, Mad Hatter and Batwoman.

That is why this statue is the perfect Valentine's Day reminder that to love someone can mean many things. But above all else, it's to always be there for the people you care deeply about, in good times and bad.

Love can mean many things… loyal best friend… this has to be deliberate at this point, right?

Alysia Yeoh Returns To Batgirls Wih Her Own Bar/Cafe

Alysia Yeoh was a DC Comics character meant to have appeared in the now-shelved Batgirl movie, portrayed by Ivory Aquino. She would have been the first

Captain Marvel sends Moon Girl to the moon to track down Devil Dinosaur in this preview of Avengers and Moon Girl #1... but it's after bedtime!

The Rare Debut of Lightning Girl & Other Lightning Comics, at Auction

With Lash Lightning captured in Lightning Comics v3 #1, he was able to transfer his powers to Isobel Blake, who became Lightning Girl.