The delicious tension developed in Winter Guard #3 plays out as disparate parties that have been at odds for the entire series are forced to confront the realities of their struggle, all while implacable power snickers at their foibles. Everything in the series has led to this point specifically, and from here, the story pivots into one where no one can claim ignorance anymore.

Project Snowblind is, in a word, bad news. Like the Pandora Papers times a hundred, the Winter Guard has been tasked with keeping these dirty little secrets safely under the rug. At the same time, Alexei Shostakov (dba The Red Guardian, or as cinematic fans might think of him, "Russian Hopper") and Yelena Belova (known to some as The White Widow) are determined to bring said secrets into the light of day. In between them is an implacable, eternal threat that trades under the flag of friendship and diplomacy.

Ryan Cady's script plays the "dinner party" gag with great anticipation, and when the inevitable shenanigans begin (that's not a spoiler, it's a superhero comic book), they feel well earned. However, it is quite hard to make a dinner party work in a dynamic medium. There's nothing wrong with the work from Jan Bazaldua, Federico Blee, Fernando Sifuentes, and Ariana Maher. Still, even in panels where tension almost boils over ("Keep his name out of your mouth" or "watch your words, little shadow"), the art seems like it's restrained by the script and not working in concert with it. Admittedly, there's a simply fantastic flashback treatment here that is clever and innovative.

The previous issues were good; this one is a bit above good, so from a momentum perspective, that bodes well for what's ahead. RATING: HONORABLE MENTION.

Winter Guard #3
Ryan Cady, Jan Bazaldua
A SEAT AT THE TABLE! The White Widow and Red Guardian are ready to strike a bargain — but not with the Winter Guard. Red Guardian enlists help from a shocking source but this is spy business, and 'trust' is a mythical thing. Betrayals abound in the darkest corner of Russia as the hunt for project SNOW BLIND heats up! 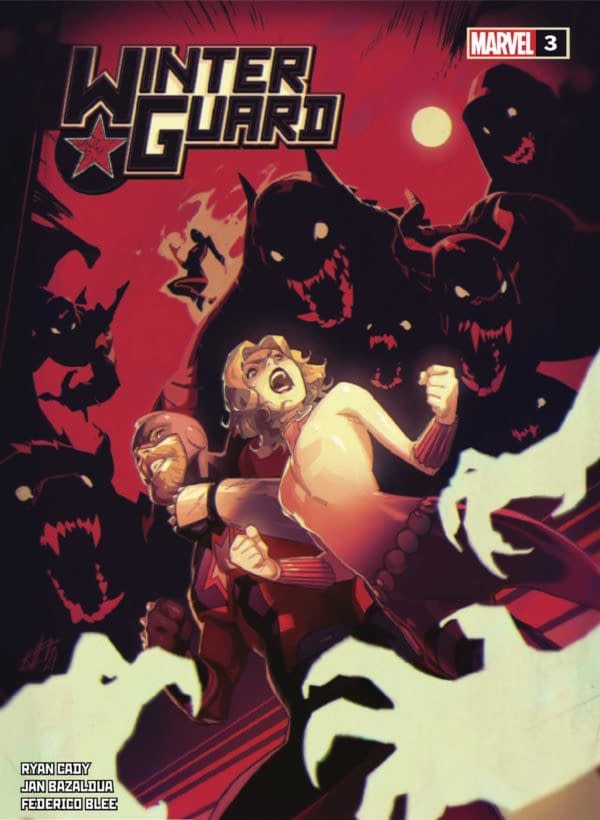 Review by Hannibal Tabu
7.5/10
Everybody’s got a vision for the future of Russia, but how many of them can survive a date with Dracula to secure it?
Credits
Editors
Akira Yoshida, Tom Brevoort, Sarah Brunstad, Alanna Smith, Kat Gregorowicz

The gang deals creatively with a couple of home invaders in this preview of Betty & Veronica Jumbo Comics Digest #311.

The Deadliest is a comedy STEM graphic novel series for ages six to nine by entomologist Dr Eleanor Spicer Rice.

Tales Of Horror #11 and a Dangerous Flower in Florida, Up for Auction

Tales Of Terror indeed, as a woman falls victim to the Death Flower, in a great pre-code horror story taking bids at Heritage Auctions.

Johnny and Talia go for a little camping trip in the woods in this preview of Ghost Rider #11... what could possibly go wrong?!