Being the Ricardos is a movie that only half works because star Nicole Kidman is really only believable when she is playing Lucille Ball the person, not Lucy the character. It also undercuts its own message of how hard she had to work to get Desi cast in I Love Lucy as a Cuban man by not hiring a Cuban actor to portray him.

Being the Ricardos is the type of movie that we always see during the fall release season. There is something about biopics and the awards season that always seems to go hand in hand regardless of how terrible the performances in said biopics actually are. This is not one of those offensively bad biopics, and a lot has been made about the casting of Kidman in particular. For some reason, people are holding her looks against her when it comes to whether or not she should portray this person, but the issue actually has nothing to do with Kidman's looks.

The issue comes down to Kidman's acting, and that she is a more subtle actor. She doesn't play a lot of over-the-top slapstick or comedy characters. That leads to one of the strangest things that happen in this movie: the strange juxtaposition between Kidman playing Lucille Ball and Kidman playing Lucille Ball — who is playing Lucy.  It's jarring to see the performance work and then fall apart as soon as she needs to play a person playing a character. That is a hard skill to master, an actor playing a person who is acting as a different person, but Kidman could have done it with a different role. This one, however, called for something different that Kidman is just not suited for, and it makes for very strange moments when we see the show in the movie proper.

Javier Bardem is excellent as Desi Arnaz, but the casting undercuts the point that the movie is trying to make. There is an entire scene dedicated to Lucy basically walking into CBS and telling them that if they want her, they are going to cast Desi as Ricky. She doesn't flinch on this, and getting him on screen was a big deal. It wasn't just seeing a Cuban man portrayed on television, but a man with an accent as well. Desi Arnaz is an important figure when it comes to Cuban representation on television. Being the Ricardos undercuts how hard Lucy had to fight for Desi by giving the role to someone who isn't Cuban. Bardem does a good job with the role, that cannot be denied, but to see the movie stomping its foot and loudly declaring that Lucy had to essentially give CBS an ultimatum to get Desi on screen and then not hire a Cuban actor shows a real dissonance between what is in the script and what is happening behind the camera.

The rest of being Being the Ricardos is fine. The supporting cast, particularly Nina Arianda and J.K. Simmons as Vivian Vance and William Frawley, takes over the movie every time they are on screen. The best moments in the film and the ones that lead to the real insight of being on a show like I Love Lucy don't come from the two people at the center of the drama but the two people playing the supporting roles. Director Aaron Sorkin frames the movie like we're watching a documentary complete with flash-forward interviews with many of the key players. While that is an interesting idea, it is also another thing that makes the movie fracture at times. The only things that are shot and feel like a documentary are those interviews, while the rest of the movie is shot and styled like a regular movie. In the end, it makes the interviews distracting, and they are really only there to provide context where the story is unable to do so.

Being the Ricardos is far from the worst Oscar bait coming out this year, but there are so many things about this movie that don't work well enough. All of the good is countered by the bad or the weird. The casting is a massive issue, but not for the reasons that people are pitching fits about. Kidman and Bardem are excellent actors, but these roles aren't for them.  The writing and directing are good enough, but this is Sorkin, and he's usually competent if nothing else. It's a movie that isn't going to leave much of an impression on anyone whether they are fans of I Love Lucy or not. 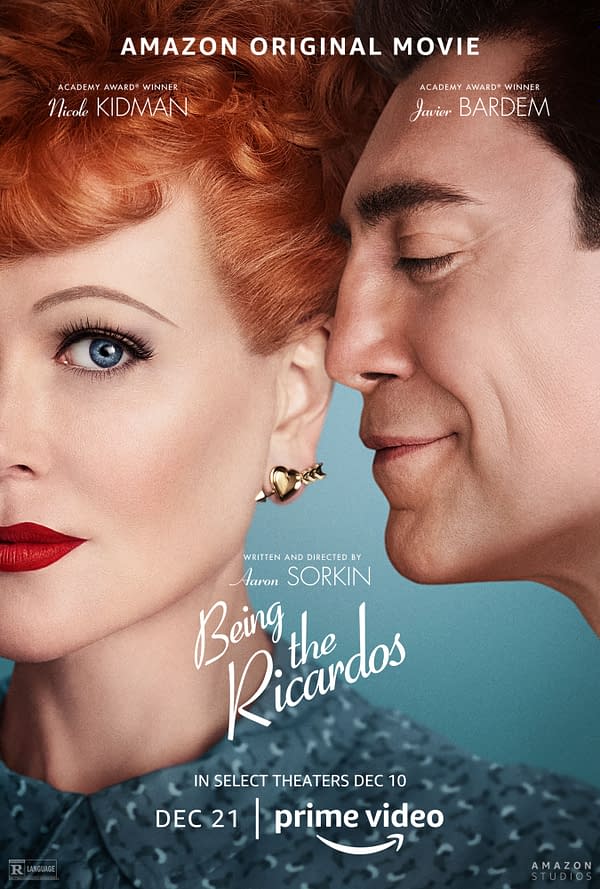 Review by Kaitlyn Booth
6.5/10
Being the Ricardos is a movie that only half works because star Nicole Kidman is really only believable when she is playing Lucille Ball the person, not Lucy the character. It also undercuts its own message of how hard she had to work to get Desi cast in I Love Lucy as a Cuban man by not hiring a Cuban actor to portray him.