To say that Kevin Smith poured his heart and soul into presumably the final film in the Clerks trilogy would be an understatement. Not that he wasn't ever capable of telling quality stories before, but his sequels like 2019's Jay and Silent Bob: Reboot or even 2006's Clerks II felt a bit overindulgent chock full of cameos from his industry friends lacking in any real substance. They're fun films for only those heavily invested in his View Askew-inverse. His latest in Clerks III is a very different and refreshing experience, albeit a gut-wrenching one.

The story is inspired by Smith's own past medical episode following his heart attack. During a normal day working at the Quick Stop Groceries, Randal (Jeff Anderson) suffers his own heart attack, and Dante (Brian O'Halloran) calls 911 to save him. At the hospital, Amy Sedaris' cardiothoracic surgeon can treat Randal's condition while trying to remind the middle-aged men how they need to start giving a shit about their lives and diet. Given the nature of their characters, they won't. Following the episode, Randal goes through survivor's guilt trying to find meaning in his life when Dante gives him the suggestion that instead of watching movies, why doesn't he make one?

Randal found renewed purpose as they essentially film the scenes of the original 1994 Smith film since he's making a movie about his own life. Given the nature of their characters, Randal never changes his ways whatsoever, remaining his insufferable, abrasive self, while Dante remains the "bend, but don't break" straight man. We get the usual suspects of holdovers with Smith's Silent Bob and Jason Mewes' Jay getting back to their antics and, as Randal calls them, "C-3PO and R2-D2" in terms of their importance to the narrative. Trevor Fehrman's Elias has a more meaningful arc compared to his introduction in Clerks II as he acts out more since Randal's heart attack, actually to the point of embracing Satanism.

Rosario Dawson is definitely there, but not the way you would expect it, which will disappoint those who expected far more from her character, Becky, since the 2006 film. We would get the usual cameos from Smith's actor friends regardless if they made a past appearance in his previous films. Still, the one to note is the return of Marilyn Ghigliotti, who reprises her role as Veronica from the 1994 original. I am aware she also did a cameo in 2019's Reboot, but Ghigliotti's appearance in Clerks III is actually meaningful.

We get the familiar themes between Dante and Randal, trying to find greater meaning in their old age and surviving through menial labor and mediocrity. Still, the current film literally reaches a fever pitch, and by the end, its empathetic notes might actually hit this time. Dante and Randal's biggest strength is that they never really felt like characters but rather blue-collar every, person geeks as long as you're willing to be patient to sift through what seems to be incessant nihilism (mostly from Randal). They were never meant to be put on a pedestal like Jay, and Silent Bob are in their adventures. It's O'Halloran and Anderson at their finest, saving their best for last. 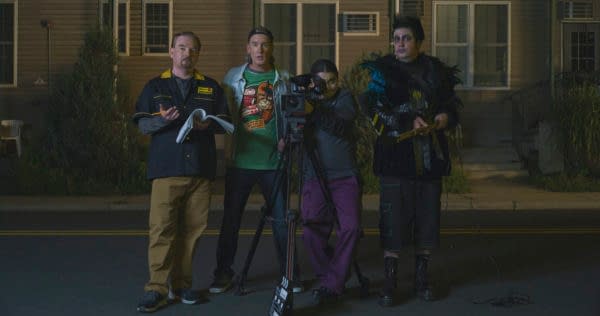 The Last of Us Season 2: Some Casting Thoughts on Part II's Abby

With HBO renewing The Last of Us, the big question for Season 2 and beyond is who should be cast as Abby. Here's who we're nominating...

The Last of Us: Offerman on Ellie/April from Parks and Rec Comparison

The Last of Us star Nick Offerman says Bella Ramsey's Ellie is to Bill as Aubrey Plaza's April was to Ron Swanson in Parks and Recreation.

Friends & colleagues from across the entertainment industry paid tribute to the late actress Annie Wersching, who passed away at age 45.

The Blumhouse Five Nights At Freddy's film has begun production under the working title Bad Cupcake, according to a tweet from Jason Blum.