Encanto isn't anything particularly special when it comes to the music. However, the plot and how it handles being treated like an outsider by your own family is going to hit some people much harder than others.

Directors: Jared Bush, Byron Howard, and Charise Castro Smith
Summary: A young Colombian girl has to face the frustration of being the only member of her family without magical powers.

Disney movies seem to be in the process of overcorrecting in the last couple of years. For a long time, the animated films were almost entirely defined by princesses getting into some sort of romance. However, starting with Tangled but becoming much more apparent with Frozen, Disney decided that the best way to have a broader appeal was to make their movies about familial love instead. It's been an interesting change, but in the case of Encanto, it means there really isn't a villain outside of family dynamics. There are probably some things that the creators of this movie intended to cover. For example, feeling like an outsider in your own family or not feeling like you're as special as everyone else. They're just made a lot less subtle about it in an animated kid's movie by not giving our protagonist magical powers like the rest of her family.

However, the problem is that Encanto does too good of a job of making other members of Mirabel's family, but specifically her grandmother, irredeemable. This is likely going to be the part of the movie where it's going to largely depend on how you feel about your own experiences in your own family. How did you react the first time a family member made you feel like an outsider or like you didn't matter? How long did it take you to forgive them? Did you ever forgive them? There are some strange implications in this movie about forgiving family even if they do something terrible to you because they are family, and if that is something that isn't going to sit right with you, then this movie might be hard to watch.

Aside from unintentionally throwing members of its audience into an existential crisis, Encanto is a better movie than a musical. With the exception of "We Don't Talk About Bruno," which is an earworm if there ever was one, there really isn't anything special about the songs in this movie. It felt like Lin Manuel Miranda was working on autopilot for most of them, and while the cast does an admirable job of making them catchy and fun to listen to, there really aren't any that are going to stick with you in the long run. In fact, there are moments when the songs feel like they are breaking up the flow of the overall movie instead of adding to it, which is a real shame.

The cast is game for all of this, and they all do a very good job of elevating these characters. Stephanie Beatriz gives Mirabel some real pathos, and you really understand her frustration when it comes to the other members of her family. Jessica Darrow and Diane Guerrero are both excellent as Mirabel's sisters and bring some real dimension to two characters who could have been extremely one-note. The animation and character design are bright and colorful, and the representation of different skin tones in the Madrigals family is a welcome change. All of the powers that the various characters possess are pretty generic, but the way they go about using them to help the town is interesting. They are less superheroes than they are specialists in various types of work. Mirabel's mother is essentially the town doctor because she can heal with food. Luisa uses her strength for rather mundane things like moving bridges to more convenient spaces or fixing leaning houses. She's a one-woman construction company. When the first trailer for Encanto came out, people were making X-Men comparisons, but aside from gaining powers at a certain age, they really aren't anything alike.

Encanto isn't bad, not by a long shot, but isn't the best that Disney has put out either. It would have worked better without the songs, and the ending feels a bit undeserved. However, most of it is a fun ride, and it's really going to hit you in the feels. You could certainly do worse at the theater for a kid's movie, but you won't be missing much if you wait until this one shows up on Disney+ in a month. 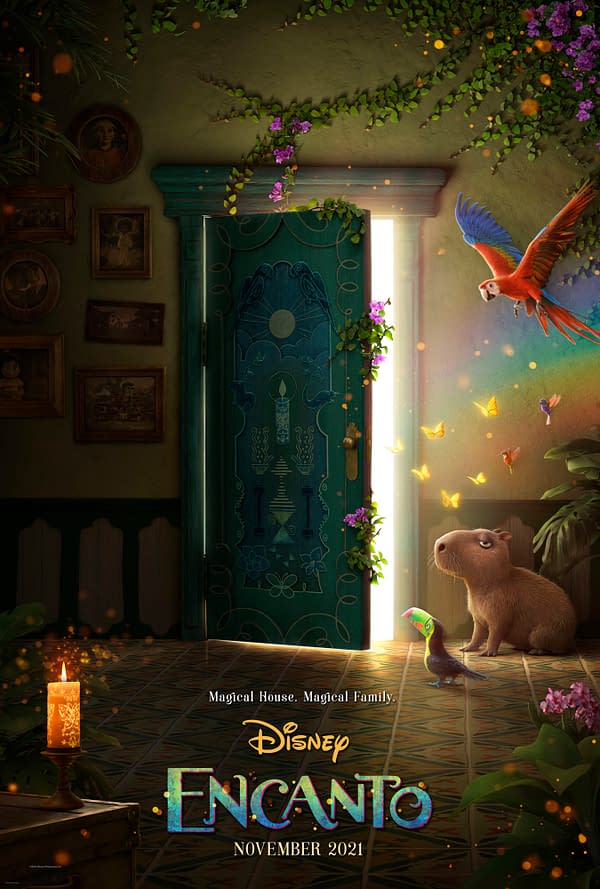 Review by Kaitlyn Booth
7.5/10
Encanto isn't anything particularly special when it comes to the music. However, the plot and how it handles being treated like an outsider by your own family is going to hit some people much harder than others.

After a rough start, She-Hulk: Attorney at Law finds its footing with the second episode as this show establishes itself as something new.

Giveaway: Win A Copy Of Jurassic World Dominion On Blu-Ray

Kill Bill: Michelle Yeoh on Why Tarantino Didn't Cast Her in Film

Michelle Yeoh (Everything Everywhere All at Once) on why director and long-time fan Quentin Tarantino didn't cast her in Kill Bill.