There's something to be said about the nature of humanity and the need to feel a sense of worth through selflessness, especially within the world of performing arts. In the realm of comedy, we have many iconic figures that fall within the "sad clown" category, who spent their entire lives entertaining the world like Robin Williams, Richard Pryor, George Carlin, Lenny Bruce, Chris Farley, John Belushi, and Noriyuki "Pat" Morita, but at great personal expense. Filmmaker Kevin Derek denotes the journey of actor-comedian, who passed in 2005, in the documentary More Than Miyagi: The Pat Morita Story from his humbling roots growing up an orphan, having to endure internment camps as a Japanese-American, finding his voice as a stand-up comedian, achieving fame in Hollywood, and battling his personal demons with alcoholism to the very end.

The documentary provides a traditional biographical view from the actor's own words and his loved ones. From his humble roots from childhood that shaped Morita's early one, the film explores how he broke through the entertainment scene even when it meant playing degrading caricatures at a time when Asian stereotypes and whitewashing were the norms, whether if it's playing Chinese or Japanese roles. Aside from his initial film roles, Morita thrived on television with his breakout role as Arnold in Happy Days with stories from stars Henry Wrinkler and Marion Ross and producer Gary Marshall. Naturally, with his success on the show and recurring appearances on other comedies like Sanford & Son, Hollywood attempted to build on his popularity leading new shows like Mr. T and Tina and the drama Ohara, but both failed miserably.

More Than Miyagi obviously also explores his most signature role as Nariyoshi Miyagi with interviews from most of the major cast and crew from the four Karate Kid films, including stars Ralph Macchio, William Zabka, and Martin Kove (who all also star in the Netflix sequel series Cobra Kai) along with franchise creator Robert Mark Kamen and Next Karate Kid director Christopher Cain. The documentary hit all the expected points with the double-edged sword of how the world gained a new-found respect for Morita for his Oscar-nominated performance, but at the same time, typecast him as "Miyagi" for the rest of his career. Derek does a great job covering the Hollywood story of a man who just wanted to help make the world laugh. There's quite a diverse range of subjects who reveal so much about what Morita meant for them personally, from his co-stars from his two biggest projects to others like Tommy Chong, James Hong, Guy Aoki, and his widow Evelyn Guerrero-Morita, who provided more intimate insight beyond the industry. More Than Miyagi from Love Project Films is available on February 5 on digital, Blu-ray, and DVD. 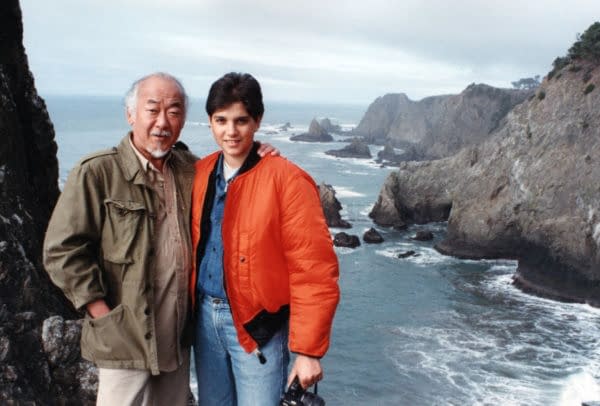 Review by Tom Chang
9/10
A heart-warming documentary about the life of Pat Morita, "More Than Miyagi" chronicles the late actor-comedian who spent his entire career bringing joy to others while chronicling battling his own demons at the end of the bottle. Director Kevin Derek provides an intimate look at the man as he rose to stardom finding success on stage and the screen from loved ones achieving the balance focusing on his success while placing his problems within proper perspective.