The Seed is this week's horror movie premiere on horror streaming service Shudder, and that's probably the nicest thing that can be said about it. At first blush, The Seed sounds like a serviceable, low-budget indie horror movie about a trio of women trapped in a remote location with an alien invader. Other than that, it doesn't seem to have anything going for it other than slick production values and practical, non-CGI effects of the gloopy variety.

Three young women head out to a luxury house to witness a meteor shower in the desert. Two of them are influencers who plan to film it on their phones for the likes, while the third is a quasi-Luddite who shuns social media. She's the sensitive, thoughtful one whose Final Girl status is telegraphed, while the script seems to judge the other two with contempt for their dependence on their phones and social media. The meteor shower brings a gloopy, stinky creature that lands on the estate that proceeds to mess with their heads until only the Final Girl realizes it's an alien invasion that must be stopped. The story takes a long time to get going, and every plot point is utterly predictable.

The most exciting way to look at The Seed is to think of it as a cynical sequel to David Lynch's Eraserhead. Imagine if some mini-studio or production company with some seed money got the rights to that seminal and highly personal experimental art movie and made a hacky decades-later cash-in follow-up without Lynch's input. The alien in The Seed looks like it could be the monstrous fetus from Eraserhead, now grown up and out looking for dates, possessing mind-control powers to coerce women into having trippy Body Horror sex so it can impregnate them. It doesn't have anything to say other than a slow, plodding trek towards psychedelic and predictable violence-strown climax.

Shudder often picks up indie horror gems that might otherwise be overlooked. That's how you might discover subversive, fresh, original movies like Hellbender; They Live in the Grey or Host. The Seed is not one of those gems. The film initially appears to be commenting on influencer culture and narcissism but really doesn't say anything at all. It feels like a slick showreel auditioning for future, hopefully higher-budgeted, work. Its message is… female influencers deserve to be punished by getting mind-controlled and raped by an alien? The movie is a throwback to 80s horror movies but also embraces their misogyny where women's bodies are there to be messed with and violated for no good reason. What if it had been a trio of men and the script was completely the same? That would have been a witty subversion of horror movie sexism, but the director is clearly not interested in trying anything new or original. The most interesting thing about the movie is its production dynamics: it's set in the US but shot in Malta, its American characters are played by British actresses who deserve better. Maybe that's the real subtext of The Seed: a British commentary on how violent and dumb they think America is.

But hey, there's always next weekend. Maybe the new horror movie premiering then will be original and surprising. We live in hope.

The Seed is now streaming on Shudder. 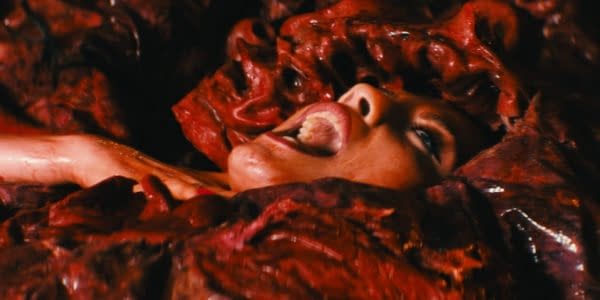 The Three-Body Problem is getting a second season in China, adapting Liu Cixin's The Dark Forest & a miniseries featuring cop hero Shi Qiang.

Yen Press will be publishing Rose Guns Days Sorrowful Cross Knife, the prequel to the original Rose Guns Days manga by Ryukishi07, creator of Higurashi When They Cry, with art by Tsuyoshi Takaki

The Exorcist cast has grown yet again, as Olivia Marcum has joined up. The film will release in theaters on October 13th.

A24, Atomic Monster, Chernin, 21 Laps Team Up For Film The Backrooms

A24 is teaming up with Atomic Monster and others to bring 17 year old Kane Parsons found footage series The Backrooms to theaters.

Knock At The Cabin, 80 For Brady Take Down Avatar At Box Office

Knock At The Cabin and 80 For Brady were able to finally take down Avatar: The Way Of Water at the weekend box office.