The first results are in, and AEW Dynamite's debut show on TNT beat NXT in the overnight Neilsen ratings, scoring a .7 in the 18-49 demographic vs. NXT's .5. AEW also drew 1.4 million viewer compared to NXT's 891K. In response, WWE issued the following statement, according to Wrestling Inc.:

Congratulations to AEW on a successful premiere. The real winners of last night's head-to-head telecasts of NXT on USA Network and AEW on TNT are the fans, who can expect Wednesday nights to be a competitive and wild ride as this is a marathon, not a one-night sprint.

Notable about AEW's victory is that, though it was the premiere, AEW's show did not feature their entire roster and felt like what we can probably expect to be a regular weekly outing for the company. NXT, on the other hand, featured three title matches and the return of WWE star Finn Balor to the "developmental" brand. As many pundits have noted, it looks like AEW went about business as usual and defeated an NXT that was giving it everything they had.

It remains to be seen how things will play out over the long term, as some believe the new promotion smell of AEW will eventually wear off, but personally, I think things are only likely to get better as the company introduces more of its roster and develops more complex storylines. Read my review of last night's show here.

The thing is, everyone agrees that NXT features great wrestling and has great stars, but NXT is the sort of wrestling best appreciated by people who engage it in the same way an art critic engages a fine art painting. It's technically great, but it can also feel creatively sterile. Worse, the fans are more interested in making themselves part of the show with their smarky chants than they are in actually enjoying the show. It doesn't help that everyone knows as soon as any of NXT's talent gets called up to the main roster, they will immediately be thrown into the WWE meat grinder and reprocessed as formulaic jobbers engaging in cuck angles.

WWE putting NXT up against AEW exposes NXT for its poseur image. How are you gonna be a show produced by a billion-dollar corporation that put all its competition out of business two decades ago and present yourselves as some kind of underdogs trying to prove you've got what it takes because the building is lit poorly. Bitches, you've got WWE contracts. That same billion-dollar corporation literally moved this show to USA and expanded it to two hours for the sole purpose of attempting to drown out their potential competition by trading on ill-gotten underground wrestling cred. Furthermore, since when did Triple H, the guy who literally slept his way to the top of the business and spend over a decade burying his rivals like peak WCW era Hulk Hogan, become the face of indie wrestling? @#$% that.

AEW Dynamite represented the sort of wrestling show that used to exist before WWE formed a complete monopoly on North American wrestling. Where WWE is overproduced, overscripted, and overpolished, AEW felt spontaneous and unpredictable. Give me that any day of the week over any show WWE puts on the air, and I say that as a person who's watched every show WWE puts on the air for over thirty years. AEW is a badly needed breath of fresh air on the North American wrestling scene.

Suck it, marks! Onward to the next week! 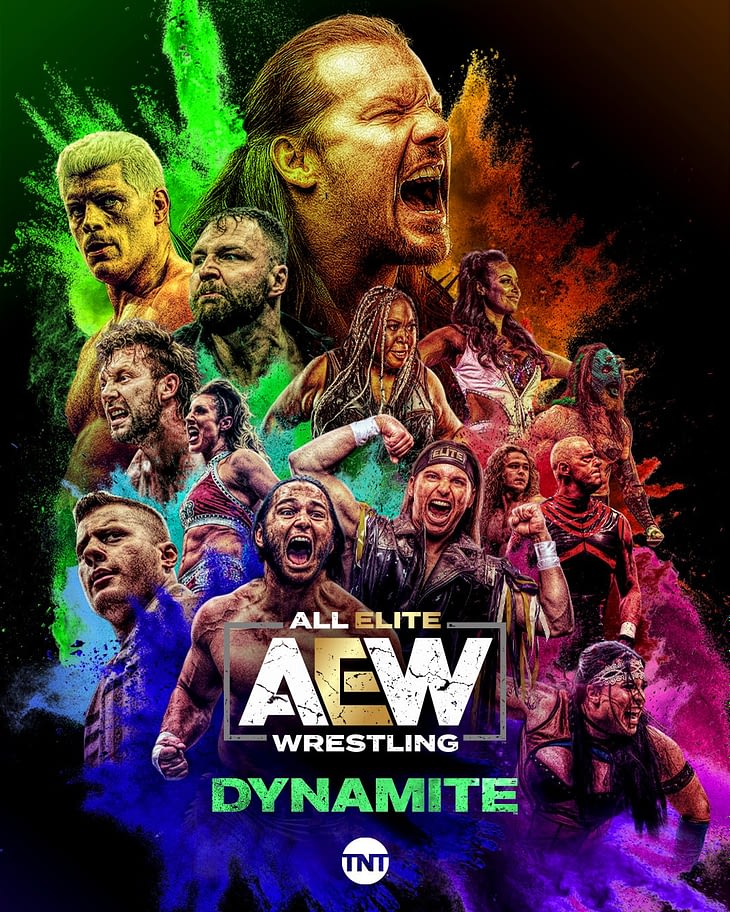 With the Royal Rumble happening this Saturday, WWE pulled out all the stops for this week's episode of WWE Raw. All except actual wrestling.

Under normal circumstances, wrestlers would do anything for heat, but WWE star Shotzi won't do that.

Wonder Girl #7 will now be the series finale after DC canceled the comic early, so enjoy this preview while you still can!

The Thing and the Human Torch bust Spider-Man out of jail in this preview of Devil's Reign #3, in stores Wednesday from Marvel Comics.

Nick Stahl (Fear the Walking Dead) has joined the cast of Showtime's upcoming vampire drama series adaptation of Let the Right One In.

With Peacock's updated take on the sitcom premiering on February 13, here's a look at a new teaser as well as poster key art for Bel-Air.

Garfield Goes Noir in This Production Cel Now On Auction

The Jim Davis Collection features on Heritage Auctions with this noir-inspired Garfield production cel. Here's how you can win it. Sponsored.

Batwoman S03E10 "Toxic" Preview: Alice Has a Plan to Get at Poison Ivy

In the following preview for The CW's Batwoman S03E10 "Toxic," Alice has a plan on how to save Mary from Poison Ivy- but can she be trusted?

NXT 2.0 Recap 1/25: Getting Closer To Santos Escobar vs Bron Breakker

Our recap for this week's NXT 2.0 on the USA Network, which saw Santos Escobar & Legado del Fantasma escalate the war against Bron Breakker.