So in season three premiere when Valley held the town hall where irate parents were angry from the fallout of the school-wide brawl in "Aftermath", Daniel tried to calm the angry mob from going all Footloose and banning karate. The hammer, unfortunately, fell on the pastime as the All Valley Karate Tournament with the escalating violence between the warring dojos Miyagi-do and Cobra Kai. This is your minor spoilers warning for the Cobra Kai episode "The Good, the Bad, and the Badass."

The episode begins with both Daniel (Ralph Macchio) and Johnny (William Zabka) back into full training for their respective dojos in Miyagi-do and Eagle Fang, respectively. Both meet with Robby (Tanner Buchanan), who completed his stint in juvie, but wants nothing to do with either of them. In a coincidental turn of events, he happens to bump into Tory, who was seeing her probation officer. Naturally, she sews the seeds of doubt of those he once trusted. His fears and paranoia are confirmed on a visit to Miyagi-do with his leftover feelings for Sam.

Paths finally converge between the three dojos to present the case in Valley town hall and it goes about as "well" as you expect with Daniel, Amanda (Courtney Henggeler), and Johnny on the verge of exploding in front of the town hall to Kreese. The bulk of the episode is light on action and high on tension. The main characters do their part in carrying the episode, but one of the most underutilized of the series is Vanessa Rubio, who plays Miguel's mother Carmen. As much as Xolo Maridueña's Miguel gives Johnny inspiration giving him renewed purpose in life, Carmen helps validate their cause. She sees the kind of father figure Johnny is to Miguel and all the good he does. The second episode directed by Jennifer Celotta and written by Josh Heald, Jon Hurwitz, Hayden Schlossberg, and Mattea Greene obviously gives you a sample of a possible explosive finale with the three dojos among the sensei and students. 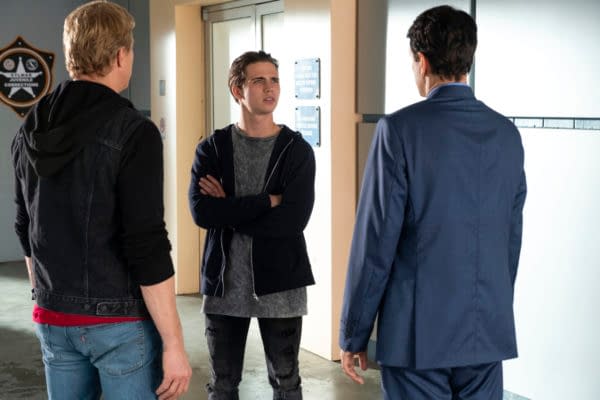 Review by Tom Chang
6.5/10
The second episode directed by Jennifer Celotta and written by Josh Heald, Jon Hurwitz, Hayden Schlossberg, and Mattea Greene obviously gives you a sample of a possible explosive finale with the three dojos among the sensei and students. The underused Vanessa Rubio shines providing resolve and heart. It's predictable and goes as expected.

Antony Starr responded to Hip-Hop producer Metro Boomin including a sample of his Homelander speech from The Boys S03E02 on a new track.

William Regal may soon be free, but The Chadster's struggles continue this week with another episode of AEW Rampage. Auughh man! So unfair!

The CW's The Flash star Danielle Panabaker confirmed via Instagram that the 13-episode ninth & final season is halfway finished with filming.

Gary Oldman confirmed he is now filming Season 3 of Apple TV+'s Slow Horses and will begin filming the fourth season in 2023.

In these series finale preview images for DC's Stargirl, lines have been drawn and it's time for "Sylvester" & Courtney to have a "reckoning."