We're at the midway point of the third season of Netflix's Cobra Kai and everything Daniel LaRusso (Ralph Macchio) thought he knew about his sensei Mr. Miyagi (Pat Morita) is about to change. We also see someone reach their breaking point in the adolescent dojo war. As always, this is your minor spoilers warning for the episode "Miyagi-do."

One thing John Kreese (Martin Kove) instills within his students is to fight their battles smart. With Valley High on high alert on the waring dojos between Miyagi-do and Cobra Kai, the battles shifted off-campus. Among the first victims is Miyagi-do's Chris (Khalil Everage) where Eli/Hawk (Jacob Bertrand) and two other Cobra Kai harass him and the patrons at his job at the local arcade Golf N' Stuff. They ended up stealing numerous prizes in the process. Sam (Mary Mouser) mounts a counterattack with her entourage of Miyagi-do only to be overwhelmed by Tory (Peyton List) and Cobra Kai reinforcements.

The incident leaves Sam further down her PTSD with the initial onset triggered by the school-wide brawl at the end of season two and scars left behind with her confrontation with Tory. In the other arc that sees Daniel catching up and sparring with his The Karate Kid Part II (1986) rival Chozen (Yuji Okumoto), the latter shows him a world of Miyagi-do Daniel never knew existed finally getting his "revenge" after all these years. Macchio's scenes in Japan are some of the most refreshing Cobra Kai had to offer and reminds us as fans of the appeal of the original films and their infinite wisdom. Sometimes, it's easy to forget that Daniel is still working on his journey to be centered in himself and by extension, his students. It's the kind of story, you wish you were there to bear witness Star Wars' Luke Skywalker go through before just being told after a time gap that things didn't work as well as hoped.

Meanwhile, Robby's (Tanner Buchanan) finally learning how to survive in juvie, and Johnny (William Zabka) and Miguel (Xolo Maridueña) take their next major step to the latter's rehab. Directed by Steven Tsuchida and written by Josh Heald, Jon Hurwitz, Hayden Schlossberg, Joe Piarulli, and Luan Thomas, "Miyagi-Do" continues to remind us how the best things can always come from unexpected places just when you think you figured everything out. 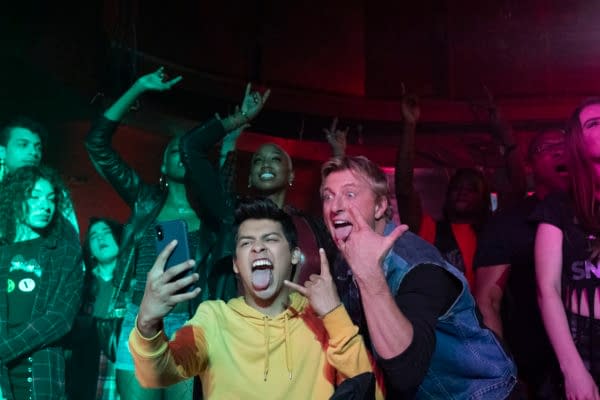 Review by Tom Chang
8.5/10
Directed by Steven Tsuchida and written by Josh Heald, Jon Hurwitz, Hayden Schlossberg, Joe Piarulli, and Luan Thomas, “Miyagi-Do” continues to remind us how the best things can always come from unexpected places just when you think you figured everything out. Notable performances by Ralph Macchio, Yuji Okumoto, William Zabka, and Xolo Maridueña anchor another gem.

Checking in with 2022 CCXP via video, Neil Gaiman dropped some The Sandman Season 2 teases; a Dream/Death deleted scene was screened.

The Witcher: Blood Origin Trailer: Every Story Has A Beginning

With the prequel series set to hit screens on December 25th, here's a look at the official trailer for Netflix's The Witcher: Blood Origin.

Though not asked (apply Andrew Garfield rule?), Arrow star Stephen Amell thinks it would be "fun" to return for the final season of The Flash.

Last night's AEW Rampage cheesed The Chadster off so much it subverted the very laws of nature. Read all about it here.

Doctor Who: TARDIS Goodbyes Created Moments of Such Sweet Sorrow

These Doctor Who moments of sad TARDIS partings between the Doctor & their companions show what was missing in the Thirteenth Doctor's run.