In Cobra Kai's sixth episode of season three "King Cobra," John Kreese (Martin Kove) decided to mold the dojo more into his image by recruiting bigger and more physical specimens from Valley High to bolster his ranks. After all, Cobra Kai was originally his before his one-time prized student Johnny Lawrence (William Zabka) revived at the beginning of the series. Upon seeing a familiar face among the recruits, it doesn't sit well with one of its senior members. As always, this is your minor spoiler warning for the episode.

The recruit in question is Kyler (Joe Seo), who was the bully at the thorn of Miguel Diaz (Xolo Maridueña) and Eli Moskowitz/Hawk (Jacob Bertrand). The latter took over as top Cobra Kai student since Miguel's back injury while he continues to be on the mend. Upon seeing his bully, it triggers familiar feelings of rage within Hawk, and while "testing" out the new recruits, he takes out Kyler's friend Brucks (Bo Mitchell). Meanwhile, the war escalates between the LaRussos and Kreese as Amanda (Courtney Henggeler) attempts to file a restraining order against the Cobra Kai sensei only to find he took one out on her after a chance incident at his dojo. It looks like Johnny's really starting to get this "fathering" thing down even if it's not his own kid.

Amanda, not taking it sitting down, attempts to strong-arm Kreese by trying to evict him via his landlord (Ken Divitian) only to find it backfire. The score so far is Kreese 3 – Amanda 1. The additional one was a prank staged at the LaRusso dealership. The third arc of the story continues where Johnny continues helping Miguel with his rehab with the latter helping Johnny with his Facebook profile trying to make him look "cool" for Ali, who he hasn't seen since high school. It's another fun sequence done in the traditional cheesiest way possible and proper for a franchise born in the 80s.

The second episode directed by Steven Tsuchida and written by Josh Heald, Jon Hurwitz, Hayden Schlossberg, Joe Piarulli, and Luan Thomas, "King Cobra" builds more depth into Kreese getting into the why and how of the character. We're treated to snippets of him before he's dealt with bullying himself and having a love of his own before his recruitment into the Armed Forces for the Vietnam War. It's another great episode that puts Kove, Henggeler, Maridueña, and Zabka front and center. Season three of Cobra Kai is available to stream on Netflix 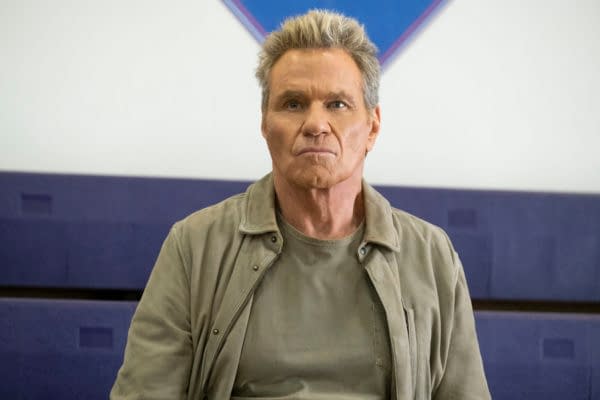 Review by Tom Chang
7/10
The second episode directed by Steven Tsuchida and written by Josh Heald, Jon Hurwitz, Hayden Schlossberg, Joe Piarulli, and Luan Thomas, "King Cobra" builds more depth into Kreese getting into the why and how of the character. Noteworthy performances from Martin Kove, Courtney Henggeler, Xolo Maridueña, and William Zabka anchor this episode.

Kirstie Alley (Cheers, Veronica's Closet, "Look Who's Talking" films) has passed away from her battle with cancer at the age of 71.

WWE Raw is taking place in the nation's capital tonight, which means the show's trademark predetermined outcomes, attention-seeking antics, and questionable decision-making will be all too familiar to the crowd.