If there was a song that perfectly encapsulated the season three premiere of Netflix's "Karate Kid" sequel series Cobra Kai called "Aftermath", it would be the Simon and Garfunkel song "The Sound of Silence". It turned out the school-wide brawl that closed season two had far-wide ranging implications than ever imagined including a Footloose-like turning against martial arts as Ralph Macchio's Daniel LaRusso brought up at a PTA meeting at Valley High. While there's tons of ground to cover, the episode focuses on how Daniel, Amanda (Courtney Henggeler), Johnny (William Zabka), Samantha (Mary Mouser), and Miguel (Xolo Maridueña) are coping with the events since.

Directed by Jon Hurwitz and Hayden Schlossberg and co-written by Josh Heald, the creators certainly didn't lose a step balancing how each character was coping. This is definitely the most involved they had Henggeler since the series started acting as the glue to keep her TV hubby on line getting to focus following the disaster. I always felt she was an underrated part of the series. While we have the rest of the season to see how the rest are coping, we get a one-liner mentioning how Aisha (Nichole Brown) "left" as in "written off the show" for now.

We also see how Sam deals with her ongoing insecurities since the fight and how she explained to her father Daniel how it's not so-cut-and-dry for an adolescent girl dealing with her trauma. When we see how Johnny deals with the incident, we naturally see him regress and how his actions in part caused Miguel to be in his current predicament. "Aftermath" is a nice smattering of what's to come for growth and tension that builds up to an unlikely conclusion. Obviously, the fear for something like this is to create some retread and come off redundant, but Hurwitz, Schlossberg, and Heald do a great job repositioning its characters. Season three of Cobra Kai is available to stream on Netflix. 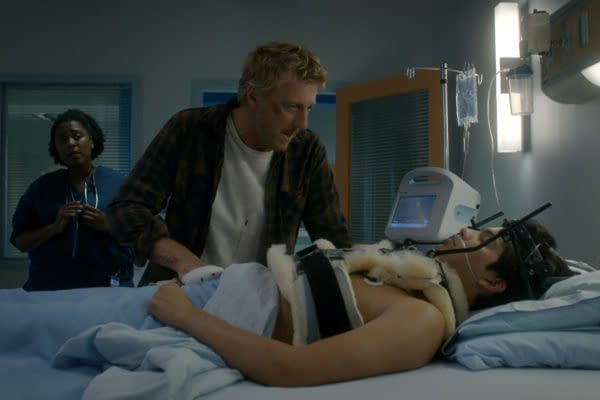 Review by Tom Chang
8/10
A back to basics episode re-establishes the characters following the school-wide brawl and how each character is coping. Memorable performances by Ralph Macchio, William Zabka, Courtney Henggeler, and Mary Mouser anchor the episode with creators back at it with their Netflix debut.

The Chadster previews tonight's episode of AEW Rampage in his usual unbiased fashion, even after everything Tony Khan has done to him!