Greetings, comrades! It is I, your El Presidente, back to deliver my thoughts on the latest episodes of my favorite trash TV shows. This week's episode of MTV's Double Shot at Love, Season 3 Episode 6, titled "Vinny Van Gogh," featured increased drama as the battle for Vinny's heart intensified.

The divisions in the group of young women competing for the love of the Keto Guido worsened this episode, and Vinny, Pauly, and Nicki definitely noticed. Leading the group of original contestants angry at the new girls who arrived with Angelina last week was Danielle and Akielia, with Danielle, in particular, taking the lead in hating on the other girls and accusing them of trying too hard to win Vinny's love (which, again, is the point of the show). Danielle's issues with the other girls even overpowered her original connection with Vinny, and that would lead to her being called to the elimination dinner at the end of the episode.

Vinny is right to be worried, comrades. Cliques are never a good thing. Cliques lead to factions, factions lead to political parties, and before you know it, you have a whole group of people you've got to have rounded up and thrown into prison lest they engage in political dissent and start planning coup attempts. I say bravo to Vinny for trying to nip this in the bud, and if a few of these ladies need to "disappear" to restore peace and balance, it's for the greater good, comrades.

The girls participated in an art contest, with the winning painting earning a one-on-one date with Vinny. Erica P and Honey were the finalists, with Vinny ultimately choosing Honey's painting, which pictured a couple standing on top of the Earth in a night sky, mostly because it was similar to Vinny's own painting, which showed two people on an Earth in the night sky while hands pushed and pulled them. As they enjoyed a charcuterie board, Vinny hinted that he could use a massage and Honey pointed out she happened to be an expert. So she gave him one, starting with the hand, but eventually walking on and chopping his back while Vinny moaned in delight. Even so, Honey did not score a kiss from Vinny during the date.

It's not a good sign for Honey that Vinny didn't go for the kiss, comrades. I have 237 wives myself, and there's not a single one of them who didn't get physically intimate with me within days of knowing her. Of course, they can't help it, comrades. I am irresistible. All the ladies are always telling me, "Your Excellency, in between ruling the country with an iron fist, thwarting the sabotage attempts of the American CIA, and disposing of your political enemies, how do you have time to maintain those abs?!" And I tell them, "ladies, I would tell you, but then I would have to kill you." That's a true statement.

For the elimination dinner, Vinny called Danielle, Erica P, and Claudelia, who had an awkward conversation with Vinny earlier in the episode. Claudelia was so upset at being chosen that she packed her bag and decided to leave the hotel rather than go to the dinner. But proving that Claudelia is playing chess while everyone else is playing checkers when Vinny learned that Claudelia was trying to leave, he left Danielle and Erica at the table and chases after her. Vinny ended up begging Claudelia to stay and she didn't even have to come to the dinner. Who's eliminating who, comrades?! When Vinny did rejoin Danielle and Erica, he let Danielle know that she should let go of her hate and focus on their connection, while he eliminated Jersey Shore superfan Erica, who he likes, but, you know, not in that way, comrades.

Let me tell you, comrades, I would not want to be on Claudelia's bad side. This woman knows how to play the game, and if she ever considers a career in international despotism, I think she would do very well, comrades.

That's all for this week. This episode of Double Shot at Love had just the right amount of drama and intrigue. It's nice that the case is getting smaller and Vinny is getting rid of the girls with which he has no romantic connection, as that means viewers can get to know the remaining castmates better. Until next time, amigos: socialism or death! 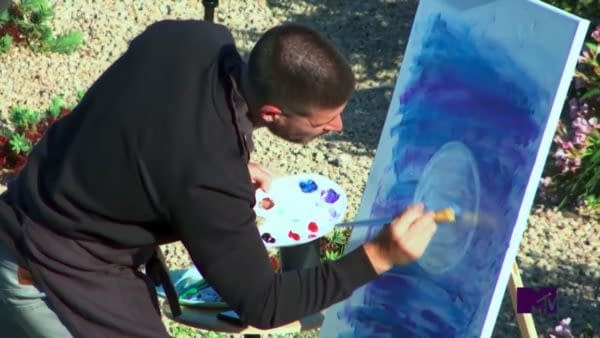 Review by El Presidente
7.5/10
This episode of MTV's Double Shot at Love had just the right amount of drama and intrigue. It's nice that the case is getting smaller and Vinny is getting rid of the girls with which he has no romantic connection, as that means viewers can get to know the remaining castmates better.