Everything The Chadster Hated About AEW Dynamite on 8/25/2021

Every week when AEW Dynamite comes on the air, The Chadster hopes that it will begin with a heartfelt apology from Tony Khan directly to The Chadster for all the ways in which Tony Khan has ruined The Chadster's life. Instead, it opened this week with a match between Matt Hardy and Orange Cassidy. Cassidy won clean in this match, which just goes to show how little Tony Khan understands about wrestling. How are younger stars supposed to get over if they don't lose all the time to build character?

Backstage, Aleister Black offered to go easy on the Nightmare Family if Brock Anderson takes a count-out in the main event. Teasing a screwjob non-finish for the main event of AEW Dynamite? Hmm. Maybe Tony Khan is starting to learn something from WWE after all.

Chris Jericho hit the ring to challenge MJF to one more match. Jericho said that if he loses, he'll never wrestle in AEW again. Yes! The Chadster's dream has come true! Chris Jericho has realized the error of his ways and will come crawling back to The Chadster's beloved WWE! MJF accepted. The promos were good, which really cheesed The Chadster off.

The Lucha Bros defeated Varsity Blonds in a Tag Team Championship Eliminator Tournament semi-final match. The Chadster doesn't personally understand why anyone cares about tag belts anyway. If tag belts mattered, Vince McMahon would care about them, but he doesn't, so neither does The Chadster. Of course, The Chadster wouldn't expect someone as disrespectful toward the wrestling business as Tony Khan to get that.

The Young Bucks and the Good Brothers, who watched the match from the stage, tried to attack after the match, but Jurassic Express, who were in the audience, helped chase them off.

Jamie Hayer beat Red Velvet off a distraction from Britt Baker in a hard-hitting match, and The Chadster just doesn't understand this booking. While The Chadster does enjoy a good distraction finish, why make Jamie Hayter look good when she's been off TV so long? It could go right to her head. You have to keep the talent in line with embarrassing losses. Kris Statlander saved Velvet from a beatdown by Bakey and Hayer after the match.

Backstage, The Dark Order fought over Evil Uno's leadership or lack thereof. It looks like the group could be headed for a breakup, which is way overdue. The thing with tag teams is you have to break them up before they have a chance to build momentum, not long after they're established as part of a storyline. If Tony Khan isn't careful, he will end up having way too many over wrestlers in AEW, which just goes to show how little he understands the business once again.

Tony Schiavone interviewed CM Punk in front of a really hot crowd. They were especially excited when Punk interrupted a "Yes!" chant to tell them that was someone else's schtick and they need to be more patient, all but confirming that traitor Daniel Bryan is headed to AEW. Punk also gave a shoutout to his wife, former WWE star AJ Lee. This audience is totally disrespectful to WWE. Don't they think that Vince McMahon might feel bad when he hears how loudly they're chanting for CM Punk? But what can you expect from crowds? Crowds don't understand the wrestling business. The Chadster wishes everything would just go back to how it was at the beginning of the pandemic. It's a good thing WWE at least has the good sense to mute the crowds and pipe in fake crowd noise over them.

Backstage, Miro cut a promo on Fuego del Sol. Miro's promos have gotten pretty weird and filled with a lot of God stuff, which The Chadster feels must be some kind of dig at WWE, since God is one of Vince McMahon's biggest in-ring rivals.

Jon Moxley, Eddie Kingston, and Darby Allin beat The Wingmen in a trios match. Daniel Garcia attacked Allin after the match. AEW's ability to blend several feuds into a match rather than having the same people face each other week after week like in WWE is extremely disrespectful to wrestling and to The Chadster directly.

Backstage, The Bunny tried to get Tay Conti to ditch the Dark Order and join the Hardy Family Office, but Conti tore up the contract and they fought. The fact that AEW has all these factions and managers is just another example of how little Tony Khan knows about the business. This is the sort of thing that got Triple H in trouble in The Chadster's beloved WWE NXT. It's too bad that Vince McMahon can't come and give Tony Khan a dose of reality too. Of course, the fact that he can't is just another example of how disrespectful Tony Khan truly is.

In a pre-recorded video, FTR cut a promo on Santana and Ortiz.

Don Callis, Kenny Omega, Brandon Cutler, and Michal Nakazawa cut a promo against Christian Cage. Cage got Callis all worked up and Callis nearly got naked, but he thought better of that. The Elite tried to beat Christian down but The Elite Hunter Frankie Kazarian got involved to save the day. Christian shouldn't be allowed to wrestle like WWE wanted and allowing him to is… well, you know what it is.

Backstage, Jon Moxley announced that he'll fight Satoshi Kojima at All Out. In all of AEW, there is nothing more disrespectful to everything Vince McMahon has done for the wrestling business than the Forbidden Door. How date these bullies AEW, NJPW, Impact, and NWA gang up on The Chadster's poor, beloved WWE? The Chadster would boycott AEW if that tyrant Ray Flook didn't force The Chadster to cover it for Bleeding Cool. Why are you such a monster, Ray Flook?!

In another Trios match, The Gunn Club took on The Factory. Billy Gunn and his kids are another example of how AEW cheats. They've only been around for a couple years but they have all these legacy stars. AEW didn't earn that. Gunn Club were in trouble but QT Marshall got distracted talking trash to Paul Wight and got rolled up by Colton Gunn for the pin.

Dan Lambert cut a promo complaining about woke millennials and AEW fans. Normally, The Chadster, being an AEW fan, would take issue with this, being a millennial himself, but The Chadster will go along with pretty much anyone who is criticizing AEW, no matter how offensive the things they're saying are. Plus, he's right to attack millennials. They're the generation that has abandoned The Chadster's beloved WWE, causing them to drop in the 18-49 demographic ratings. So disrespectful.

In the main event, Brock Anderson tried to put up a fight against Malakai Black but got knocked out with a Black Mass. Arn Anderson got in the ring to protect his son and he also got a Black Mass for his troubles. But then Lee Johnson ran out and caused Black to retreat. Where does AEW get off making a match like this the main event? They are liable to convince fans that less established stars are important too and that it's okay to get behind people who aren't the top one or two guys in the company. WWE would never make a mistake like that, but then, Vince McMahon forgets more about wrestling every day than Tony Khan will ever know in a lifetime, and Vince forgets a lot about wrestling every day because he's definitely going senile.

Once again, AEW put on a show that was massively disrespectful to WWE, to Vince McMahon, to the wrestling business, and to The Chadster personally. The Chadster isn't sure what exactly he ever did to Tony Khan to warrant this personal vendetta, but week after week, The Chadster suffers through coherent storylines, satisfying in-ring action, rewarding payoffs, and interesting, unscripted promos on AEW Dynamite. It makes The Chadster absolutely sick. And making matters worse, now The Chadster has to deal with it twice a week, since Rampage is on Friday nights. 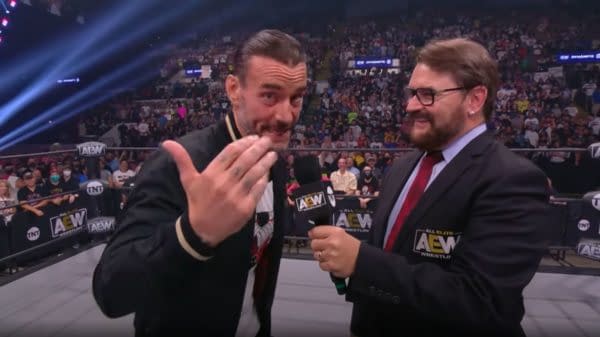 Review by Chad McMahon
7/10
Once again, AEW put on a show that was massively disrespectful to WWE, to Vince McMahon, to the wrestling business, and to The Chadster personally. The Chadster isn't sure what exactly he ever did to Tony Khan to warrant this personal vendetta, but week after week, The Chadster suffers through coherent storylines, satisfying in-ring action, rewarding payoffs, and interesting, unscripted promos on AEW Dynamite. It makes The Chadster absolutely sick. And making matters worse, now The Chadster has to deal with it twice a week, since Rampage is on Friday nights.

Tony Khan made Cody Rhodes go through a flaming table even though he was clearly suffering from bad December sunburn on his back on AEW Dynamite.

Once again, Tony Khan has personally targeted The Chadster to ruin his life with the card for tonight's episode of AEW Dynamite. Auughh man! So unfair!

WWE is Making Storylines Out of its Own Mass Layoffs

WWE Raw will be on the air shortly, which means it's almost time for what will surely be the highlight of The Chadster's entire week.

AEW Rampage: Riho Should Give Up Title Shot Out of Respect for WWE

Riho defeated Britt Baker to earn a title shot on AEW Rampage... but here's why she should apologize to Vince McMahon and give it back.

The Walking Dead: World Beyond Finale Exclusive: "No Going Back" Now

In this exclusive preview for the finale of AMC's The Walking Dead: World Beyond, a look back at how it began for Hope, Iris, Silas & Elton.

Josie Totah shines in a predominantly Lexi-centric episode of Peacock's Saved by the Bell, finding the right balance between humor & message.

Peacemaker Official Trailer: He's a Grower & Not a Shower, People

With Season 4 less than a month away, Netflix released a new Cobra Kai poster. Plus, a bold prediction about the All Valley Tournament winner.