¡Hola, amigos! It is I, your El Presidente, the greatest authoritarian dictator the world has ever seen and, if I do say so myself, a fine reviewer of the best trashy reality television. Today, comrades, it is my mission to tell you about all the drama that happened on this week's episode of Floribama Shore. Alas, Floribama Shore Season 4 Episode 21 "Camp Peach" was what we in the TV business call a "filler episode."

After the episode killed some time rehashing Bethany's visit (now Codi understands privilege), it quickly moved onto the plot for this episode: Aimee and Codi planning a camping trip. After finding and booking a luxury campground, the two announced themselves counselors and set about dictating the rules to the rest of the roommates. Comrades, I have to say I was proud. It's exactly how I would have seized power myself, except I probably would have had Jeremiah assassinated.

All of the roommates agreed to the plan, but once everyone went to sleep, Nilsa, refusing to go camping while pregnant, took her dog, Ravioli, and fled the vacation house in the middle of the night. The power-mad counselors wrote up Nilsa, the dog, and her unborn baby. Yes, comrades! You must project power! Dissenters must be punished for the good of the nation!

The roommates arrived at the campsite to find air-conditioned tents with air mattresses, making the campground potentially an upgrade from the regular vacation house. There, they immediately engaged in team-building exercises meant to heal the drama between the group. What are they, crazy?! The show would be canceled!

As it turns out, amigos, the game "human knot" that is played in America is a lot different than the one my guards play with rebels and political troublemakers in my dungeons. Haw haw haw! Things finally took a turn for the dramatic when Jeremiah and Gus were paired on a team for a game, which of course meant it was time to end the show on the best cliffhanger this episode could muster. 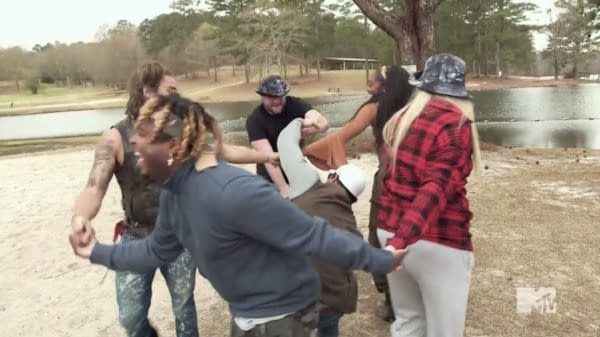 Review by El Presidente
5/10
A filler episode. Somebody needs to inject some outside drama into this situation to end the season on a high note.