Foundation, the original Isaac Asimov book, is probably the most influential Science Fiction novel of all time. Asimov was writing a riff on Edward Gibbon's The Decline and Fall of the Roman Empire with a Science Fiction twist, the latter being Hari Seldon's ability to mathematically predict the fall of an intergalactic empire and the establishment of a foundation to preserve human knowledge so the survivors can rebuild civilization after its fall. Without Foundation, there would be no Star Trek, no Star Wars, no Dune. The actual book, however, has been notoriously difficult to adapt to the screen. It's mostly abstract, academic, prosaic, and lacking in action, while Science Fiction on the screen often demands action and biff-pow entertainment. Various filmmakers spent decades trying to adapt Foundation and failed.

This TV version fails horribly. too.

You can believe David S. Goyer and his writing team read and revere the books. They make some smart choices to genderswap some of the characters and cast diverse actors. Making Emperor Cleon (Lee Pace) a genetic dynasty of clones ruling through the ages is a smart way to express the longevity and stagnation of the empire as well as a regular antagonist that a TV version of Foundation needs. Unfortunately, that's where the smart and interesting choices end. You start to see the network memos demanding a Game of Thrones in space. The scenes of violence and retribution become increasingly gratuitous and feel like they're aping tropes from other movies and TV shows.

We were willing to put up with the now-obligatory 9/11 analogy with the act of terror that launches the start of the Empire's collapse. We're willing to take the themes of climate change denial and oppressive anti-Science religions that want to make this version of Foundation relevant. Then in the final 4 minutes of episode 2, the whole show falls apart in an unearned and crass burst of cheap melodrama that comes out of nowhere. It makes no sense whatsoever for a character to commit an act that's designed to do nothing but shock the viewer, then commit another act that makes even less sense. It's a failure of basic storytelling when the audience is not only left shocked but also completely confused. There was no set-up for any of this to happen and suddenly the viewer's faith in the story just dies on the vine.

People say Foundation is unfilmable. This series doesn't even try to film the book. It just takes the title and makes a hodge-podge of tropes and clichés, ending its second episode with a gratuitous twist and cliffhanger that might turn a viewer off the rest of the season, not keep them hooked.

Foundation is streaming on Apple TV+. 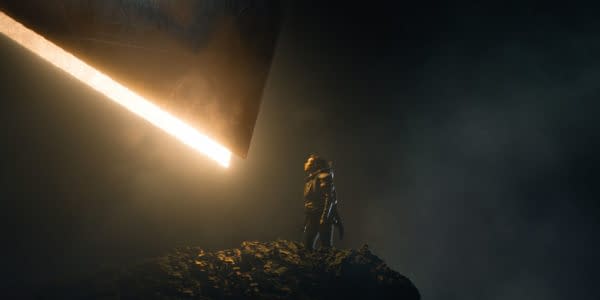 Review by Adi Tantimedh
4/10
People say Foundation is unfilmable. This series doesn’t even try to film the book. It just takes the title and makes a hodge-podge of tropes and clichés, ending its second episode with a gratuitous twist and cliffhanger that might turn a viewer off the rest of the season, not keep them hooked.

The Summit of the Gods: Netflix Releases Trailer of Mountaineer Anime

The Summit of the Gods is an award-winning adult manga series that explored the existential dimensions of mountain climbing, and Netflix just released a

Dune: Ridley Scott Almost Made Dune in the 1980s

Dune, the Denis Villeneuve version, finally opened this weekend in the US. It’s a grand, stately epic, portentous, and somewhat lugubrious in its

In AMC Fear the Walking Dead S07 "Six Hours," Karen David's piercing performance offers us one of the most relatable characters in the TWDU.

With Star Trek: Prodigy set to blast off on October 28th, here's a look at the newest previews that were released earlier today.

On Sunday, the world learned of the passing of Friends star James Michael Tyler (the unofficial 7th "Friend," Gunther) at the age of 59.

On Sunday, Ruby Rose doubled down on claims of a toxic work environment during Batwoman, posting alleged emails and messages from that time.

There are loads of TV shows with killer soundtracks but these 5 basic cable series hit high notes for us, from Daria to Mad Men & more!