Toonami has played a major role in western viewers' introduction to anime for more than 25 years, consistently curating some of the best genre titles of our time — so the anime block's recent maneuver into the intricate horror genre through a four-part series titled Housing Complex C presents an exciting opportunity for next-gen audiences. Fortunately, the new anime appears to have several fundamental elements required to be perceived as eerie, bloody, and daringly bold in execution, so you don't want to miss this one.

Right from the earliest moments of the anime, there's an earnest inclination to lean into more horror cinematic patterns, offering a very contained location that knows where to properly place its focus. In this story, the intelligently structured anime follows Kimi, a child who lives in a small housing complex in the intriguingly quiet and calm seaside town of Kurosaki and eagerly befriends another young girl who's new to the community. However, like any solid horror story, the day-to-day existence of this small town is quickly shaken up, courtesy of a new mysterious faction that may or may not be connected to the suggested appearance of an "ancient evil."

From that point on, the tonal discomfort kicks off and works toward the hype of other admirable horror media entries like Another and Shiki, titles that are easily some of the most remarkable genre offerings with their own unique sense of lore. Because of its ability to walk a fine line of uncommon world-building and the right amount of ambiguity, the appropriately titled episode "Optical Illusion" implements a solid pace for its introductory chapter and has more than piqued our interest in sticking around for the duration of the anime event.

Within its ambitious artistic endeavors, Housing Complex C masterfully facilitates its best amphoteric work during the evening — creating a need for flashlights, lamps, or even classic stairwell lights to assist characters and really embrace its more ambient capabilities. That being said, the daytime backdrop creates a smart contrast that tries to introduce viewers to a different experience within the comfort of the endearing residents of the complex, which actually becomes another noteworthy (and more original) strength of the 2022 horror title. For example, the town's day-to-day atmosphere feels very calm and safe, with the ability to rapidly pivot and display bold horror artwork that reinstates its dark nature.

Each member of the English voice cast (including Xanthe Huynh, Kayli Mills, and Jake Eberle) really comes into the story with a solid understanding of their instantly inviting characters and properly unveils each respective personality which more often than not involves plenty of polarizing dualities to consider as it progresses. In the first episode alone, the series' two young leads go from naive children to hyper-aware protagonists without missing a beat and establishing that even the dialogue intends to catch viewers off guard as frequently as possible.

By the end of its 30-minute runtime on Toonami (also streamable on HBO Max the following day), the title puts in enough work to really elicit a response from viewers, and from our perspective, Housing Complex C is starting off as a gripping ride that's worthy of your time.

The Toonami title will air for the next three weeks on Toonami's weekend block and is directed by Yuji Nara with the script and original concept by amphibian courtesy of the animation studio Akatsuki. Housing Complex C is also executive produced by Jason DeMarco (Warner Bros. Discovery) and produced by Maki Terashima-Furuta (Production IG USA). 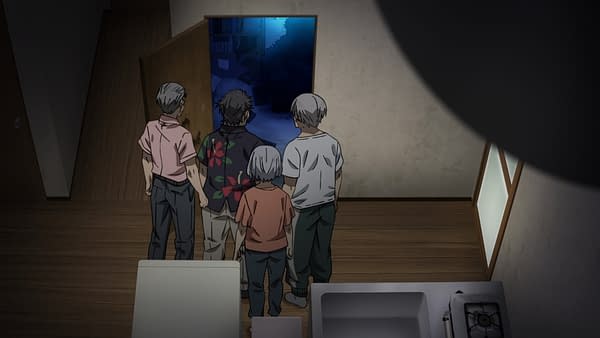 Review by Aedan Juvet
8/10
Housing Complex C wants viewers to feel safe and secure, so when things get unavoidably bloody, it’ll be impossible to refrain from pulling any punches. As an introductory episode, the series already offers a few solid scares and everything that's required to evolve into a chilling horror event, so we’re dying to see where this unpredictable anime takes us next.

A recent interview with Beverly D'Angelo revealed that there was almost a Clark and Ellen divorce movie for the National Lampoon franchise.

Guardians of the Galaxy Star Offers Hope for the Future

One of the stars of Guardians of the Galaxy recently suggested that even though the film series is ending, there could still be more to come.

Tubi's just confirmed that they will be dropping a sequel to their Terror Train remake that's now going to be set on New Year's Eve.

Avatar star Sam Worthington recently suggested that the events of the franchise in each film will greatly alter his character Jake Sully.

One of the producers behind Black Panther: Wakanda Forever suggested that we won't be seeing a solo Namor film anytime soon due to rights.

Lorne Michaels & NBC's Saturday Night Live checked in to see how Steve Martin and Martin Short were holding up during SNL read-thru.

What We Do in the Shadows: Harvey Guillen Confirms Season 5 Wrap

What We Do in the Shadows star Harvey Guillén (Guillermo) took to Instagram to confirm that filming on the fifth has officially wrapped.