This week on Jersey Shore, it's the main event of GuidoMania. It's also the opening match of GuidoMania. GuidoMania only has one match, comrades! Plus: Saffire arrives at the resort, and the outcome of Jenni and Angelina's bet is decided!

Greetings, comrades! It is I, your El Presidente, once again here on Bleeding Cool to review the greatest show on television: Jersey Shore: Family Vacation. This episode, titled GuidoMania Part 2, is the second to bring together two of your El Presidente's three favorite interests: Jersey Shore and pro wrestling. Unfortunately, my third-favorite interest, socialism, was not included. Maybe next week, comrades. Haw haw haw haw!

The show started with the literal main event, as Mike, Vinny, and Pauly faced Zack and Ronnie in a tag team elimination handicap wrestling match. The booking was simple. First, Zack pinned Pauly with a clothesline. Then Vinny, wrestling as the Keto Torpedo, got in the ring and showed off his jump rope skills. When he tried to use the jump rope as a weapon, Zack wasn't having it. Zack manhandled the Keto Guido and pinned him after a bodyslam.

When Mike got in the ring, Zack tagged in Ronnie. This matchup was billed as a rematch of Mike and Ronnie's fight in Italy, and, paying homage to that, Mike ran face-first into the turnbuckle and seemingly knocked himself out. He was just playing possum though, comrades, and he rolled up Ronnie for the pin. Zack rolled up Mike for the pin. After the match, Zack continued to beat on the Guidos, prompting Jenni's son, Greyson, to hit the ring and take out Zack with a foreign object, winning the World Guido Entertainment championship.

First of all, comrades, I just want to say that Jersey Shore actually made more of an effort to protect kayfabe in this match than WWE usually does. It wasn't a good match, by any means, from a technical standpoint, but the crowd was invested and the wrestlers were all over. Seriously, comrades, it was all very good fun. It also wasn't the worst match I've ever seen. So all in all, I would call GuidoMania a success. And anyone who says otherwise will be imprisoned for life by my secret police. Haw haw haw haw!

Another major storyline came to a close this episode as the clock finally ran out on Jenni and Angelina's bet. If you recall, comrades, the bet was that Angelina couldn't react to Vinny's teasing for 24 hours. If she pulled it off, she could push Jenni into the pool. If not, she had to run through the snow in a bikini. As the clock ticked down, Vinny stepped things up in the final minutes, dumping his drink in Angelina's cleavage. But Angelina remained stoic and walked away with the victory in this one. Comrades, I once made the same bet with my protege Maduro about the American CIA, and he didn't last ten minutes, so props to Angelina on this one.

But the true main event was the arrival of Ronnie's new girlfriend, Saffire. MTV surprisingly went forward with showcasing this storyline despite the fact that Ronnie was recently arrested for domestic violence (both Ronnie and Saffire claim it was a misunderstanding and they are still together). Ronnie was worried that the roommates would embarrass him- and sure enough, Vinny spent their first brunch together relentlessly attacking Angelina with sexual innuendo. It turns out that Saffire was fine with that, and everyone got along well.

The episode ended with the group reuniting with Uncle Nino, who Vinny hoped to ditch by stealing his suitcase while he was in the shower and leaving him with only a speedo. Of course, anyone who knows Uncle Nino knows that would never stop him, so when the roomies arrived at the pool area of the resort for the fulfillment of Jenni and Angelina's bet, they found Uncle Nino chilling in the jacuzzi with a glass of wine. Angelina did push Jenni in the pool, and Jenni took it gracefully. This marked a turning point in the adversarial relationship between Jenni and Angelina, the culmination of a storyline years in the making. See? I told you Jersey Shore: Family Vacation knows how to book good pro wrestling, comrades! Haw haw haw haw!

This episode of Jersey Shore: Family Vacation was the best one yet in Season 4. The angles were crowd-pleasing. Several storylines concluded satisfactorily. Comrades, I'm actually surprised this wasn't the season finale, but a teaser for next week indicates the season will continue with the girls taking Saffire out for a girls' dinner and Mike teaching the kids how to ice skate in an episode titled "Guidos on Ice." Hopefully, that episode and the one after can keep pace with this one and the season can end on a high note. 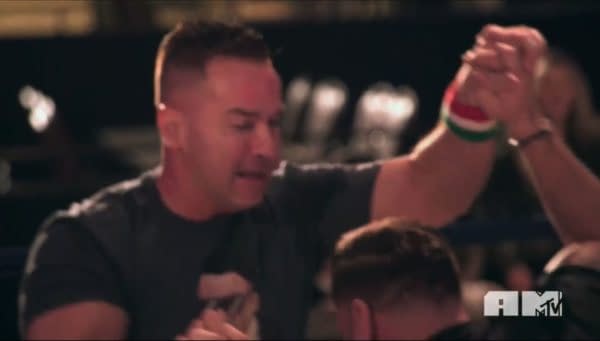 Review by El Presidente
9/10
This episode of Jersey Shore: Family Vacation was the best one yet in Season 4. The angles were crowd-pleasing. Several storylines concluded satisfactorily. Comrades, I'm actually surprised this wasn't the season finale, but a teaser for next week indicates the season will continue with the girls taking Saffire out for a girls' dinner and Mike teaching the kids how to ice skate in an episode titled "Guidos on Ice." Hopefully, that episode and the one after can keep pace with this one and the season can end on a high note.

Is WWE Ashamed of Your City? Plus: More Wrestling News and Hot Goss

WWE is ashamed of certain U.S. cities, AEW is getting a new women's title, and Cody Rhodes blasts the haters in the latest wrestling news and hot goss!

Gus stepped up his game in the Floribama Shore Season 4 mid-season premiere by ripping off the look of a 1980s John Stamos.

Jersey Shore: Family Vacation may be on break for now, but Jerzdays offer a Double Shot at Love with Vinny and Pauly D to keep fans company.

What If…? Season 1 Episode 7 Review: What If Thor Was The Worst?

What If...? Episode 7 shows that Thor is apparently one lost relationship away from being an unlikeable dudebro who is boring to watch.

With a new episode set to hit this Sunday night, AMC released the official promo for The Walking Dead Season 11 Episode 6 "On the Inside."

Agents of S.H.I.E.L.D. star Chloe Bennet took to Instagram to shut down rumors she was reprising Daisy for Disney+'s Secret Invasion.

It's Always Sunny in Philadelphia: The Gang's Group Pic Hits Our Feels

The Gang from It's Always Sunny in Philadelphia shared a group pic from their location filming that reminded us we can feel (unlike Dennis).