When it comes to wildly debaucherous reality TV shows, it's hard to find a better one than Jersey Shore. And while, in the Jersey Shore: Family Vacation sequel series, everyone is grown up and partying far less hard, they've still more than earned the break. And so, in this week's episode, the roommates declared it a family day and took the kids out for some ice skating, which they soon learned was not a guido's natural habitat in an episode titled "Guidos on Ice!"

Greetings, comrades! It is I, your El Presidente, and I am here on Bleeding Cool once more to bring you the analysis you crave for the greatest franchise in TV history: Jersey Shore. This week's episode started out with the girls kidnapping Saffire while Ronnie was in the shower. No, they weren't trying to save her from a relationship with Ronnie. They just wanted some time to get to know her by sharing stories of growing up. While Saffire gushed about what a great boyfriend Ron is (has she seen the previous episodes, comrades?!), Nikki and Jenni bonded over both being raised by single dads. Awww! It's good to see the new girls getting some good screen time.

After that, the couples gathered for a cheap knockoff of The Newlywed Game that the show dubbed "The Jerseybae Game." Each couple, or throuple in the case of Vinny, Pauly, and Nikki, had to answer questions about their partner, with the couple with the most matching answers winning. That ended up being the newly-engaged Jenni and Zack after they defeated the couple with the most time spent together (except for that entire decade The Situation took time off from their relationship to do drugs and bang girls on the original Jersey Shore), Mike and Lauren. Another notable outcome of the game was that Vinny guessed more matching answers about Pauly than Nikki did (and they even managed to fit in "Burger King" as one of the answers, appeasing their favorite sponsor they've neglected for several episodes. Comrades, the exact same thing happened when I played a similar game with my wife and my protege, Maduro. Nobody knew me like Maduro, comrades, which is why I had to have my wife executed. Haw haw haw haw!

The next morning, Jenni and Zack and Deena and Chris wanted to actually spend some time with their children, so they brought them to an ice skating rink. Mike was more than happy to tag along in hopes of getting in some practice for when Lauren has their first child. Unfortunately, as the episode's title implied, this wasn't his element. After falling on the ice three times, Lauren was forced to revoke his skating privileges. So instead, he brought Jenni's kids somewhere he felt more comfortable: the gym. The play gym, to be specific.

While the kids played, Mike announced his plans (well, really the producers' plans, comrades) to finally show Angelina those FBI boards he put together about her failing marriage with Chris. To accomplish that without further ruining the marriage, they planned to hold a roommates-only dinner where they could bring it up with Angelina without Chris around. Mike also expressed his fears about becoming a dad, to which Pauly promised to help show him the ropes. Step one: don't let your kid appear on a reality TV show.

But while the roommates were plotting to further ruin Angelina's life, Angelina was teaming with Deena to plan a birthday party for Jenni. And the guest of honor: Snooki, who agreed to show up next episode and get really wasted to make up for all the family time this episode.

Comrades, this episode of Jersey Shore: Family Vacation was down slightly from the recent drama high points but sometimes you need a little break to get the drama juices flowing again. And what better way to get those juices flowing than with the return of Snooki? I can't wait for next week!

Until then, amigos: socialism or death! 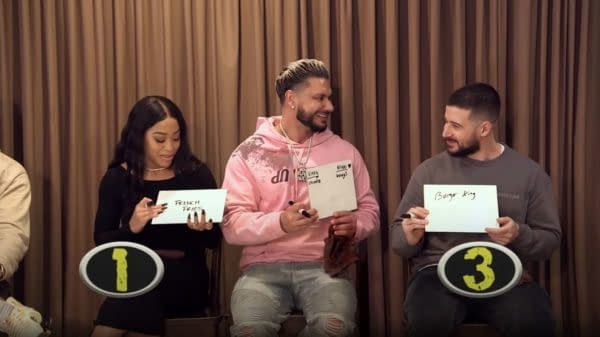 Review by El Presidente
6.5/10
Comrades, this episode was down slightly from the recent drama high points but sometimes you need a little break to get the drama juices flowing again. And what better way to get those juices flowing than with the return of Snooki? I can't wait for next week!

Floribama Shore Season 4 E15 Review: Codi is Out of Control

Spoiling it for anyone who bet easy money on Gus and Jeremiah being the first to pop off, Codi picked a fight with Candace on Floribama Shore this week.

Who did Vinny kiss first on the second episode of Double Shot at Love Season 3? And which two girls got eliminated first?

Is WWE Ashamed of Your City? Plus: More Wrestling News and Hot Goss

WWE is ashamed of certain U.S. cities, AEW is getting a new women's title, and Cody Rhodes blasts the haters in the latest wrestling news and hot goss!

Gus stepped up his game in the Floribama Shore Season 4 mid-season premiere by ripping off the look of a 1980s John Stamos.

Jersey Shore: Family Vacation may be on break for now, but Jerzdays offer a Double Shot at Love with Vinny and Pauly D to keep fans company.

But Can "Armageddon" Beat This Batwoman / The Flash Crossover?

The Flash star Candice Patton and Batwoman star Javicia Leslie may have already set a crossover bar too high for "Armageddon" to clear.

It's Always Sunny in Philadelphia: In Honor of Dee, The People's Bird

While we have a break in the Season 15 filming updates, FXX's It's Always Sunny in Philadelphia is honoring Dee Reynolds, The People's Bird