This week's episode of My Hero Academia, "Katsuko Bakugo: Rising," was phenomenal. The episode was packed with action and just urgency, it flew by in a blink. Getting insight into Bakugo's mind feels rewarding after waiting so long— turns out he is more than the mean, explosive kid we all thought he was. This season has been made up of great episodes so far that keeps the viewer wanting more.

Well, things start exactly where we left off— Shigaraki has shot the quirk-destroying bullet at Eraserhead. However, without even sparing a second, Eraserhead cuts off his own leg to ensure his power is not lost. It was so badass; we all know Aizawa is top tier when it comes to badass from moment one. Though things do not stay frozen in time for long, Shigaraki manages to get to Eraserhead, scratching off one of his eyes in the process just as Shoto appears and joins in. As his powers wear off, Shigaraki starts repairing his injuries, but Deku realizes something very important. Shigaraki and Deku, as hosts for All For One and One For All, are more alike than they think. Their bodies are not made to handle all the power instilled in them, and Shigaraki's slowly starts to split up

The destruction so far seems to have reached or possibly surpass Avenger levels by this point. Between Shigaraki and Gigantomachia, I am not sure what the heroes will do to get out of this one. Especially after they all already tried so hard to get the giant to sleep, and he just went all mighty Megazord on them and just trampled on toward Shigaraki. We do see how the students start doubting themselves as the evacuation team starts overhearing about the mass destruction occurring and the advice to evacuate the cities in between to ensure their safety.

Things surely take a turn, but to what I do not know: Deku finally unlocks the quirk of the 7th user, Nana Shimura, and gets a hold of everyone with Blackwhipe while floating so Shigaraki cannot get a hold of anything to decay.  It becomes a battle of wills while they both damage their bodies in hopes of lasting longer. Bakugo starts worrying in the ground and takes us through a little flashback of Deku asking his friends for help to train and a little pow-wow between All Might and Bakugo. We finally get a glimpse into Bakugo's mind, which does not seem to come easily: his worries about OFA and one of its previous users bullying Deku due to a lack of understanding. This is one of my favorite moments this season so far. I am glad to see that Bakugo is not the piece of shit I thought he was all along, and I am so happy about it. Quickly, however, Bakugo takes Endeavor and Shoto with him to help Deku, and we think Endeavor is able to burn him alive. We were wrong.

Shigaraki gets to stab the number one hero, Endeavor, with some scythe-looking things as he heads toward Deku, looking beyond recognition after being hit with Prominence Burn. But we see Bakugo gets to understand Deku because he gets glimpses of Deku as his body moves without thinking to get Deku out of Shigaraki's way getting stabbed himself. While I foresee no way of getting out of this without the end of the world happening, it is still pretty amazing to see the fight for it. The animation has been bomb so far, and I wish the episodes could be hours long as they feel they fly back in a second. It really has been the best season of My Hero Academia so far, and I cannot wait to see where things go. 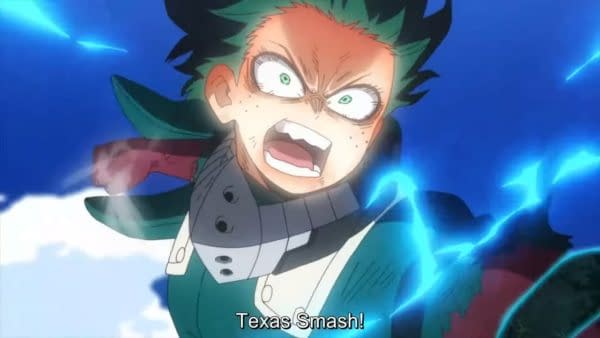 Review by Alejandra Bodden
9/10
This week's episode of My Hero Academia, S06E09 "Katsuko Bakugo: Rising," was phenomenal. The episode was packed with action and just urgency, it flew by in a blink. Getting insight into Bakugo's mind feels rewarding after waiting so long— turns out he is more than the mean, explosive kid we all thought he was. This season has been made up of great episodes so far that keeps the viewer wanting more.

My Hero Academia S06E18 "Izuku Midoriya and Tomura Shigaraki" was a fantastic episode to introduce the anime's upcoming final arc.

Paramount & Amazon's new "Star Trek" deal will bring "Lower Decks" & "Picard" to Prime Video outside of the U.S. and Canada.

A writer who worked on Adult Swim's Rick and Morty Season 4 confirmed that Justin Roiland stopped showing up to the writers' room.

In today's BCTV Daily Dispatch: The Flash, Justin Roiland, Fawlty Towers, "Bosch" universe, One Piece, @Midnight, The Last of Us, and more!