Tickets are finally on sale (or getting ready to depending on where you live) for the highly anticipated movie, My Hero Academia: World Heroes' Mission, which is set to hit theaters this October. This is the third film set in the universe, following My Hero Academia: Two Heroes (2018) and My Hero Academia: Heroes Rising (2020), which redeemed one of the most iconic characters in the show and redefined his relationship with Deku toward the end. The film will premiere on the stead of the fifth season streaming on Funimation.

Tickets for My Hero Academia: World Heroes' Mission are already on sale today in the US and Canada; on October 5th in Australia and New Zealand; and October 8th for the U.K. and Ireland. The film is set to premiere in U.S. and Canada on October 29th, as well as in U.K., Ireland, and Sweden. It premieres in Australia, New Zealand, and South Africa on October 28th. The film will open on November 11th in Denmark, Norway, and Iceland. It will be coming soon to Latin America and Finland as well. The film will premiere with subtitles in English as well as in the country's language (except for Iceland).

Running approximately 104 minutes, the film has yet to be rated. Funimation will be giving away a My Hero Academia: World Heroes' Mission Vol. W Specialty Manga Booklet to ticketholders in U.S. and Canada. It will feature 76 pages offering insight into the making of the movie including original art and a specialty manga. Keep in mind: having a ticket does not guarantee a book.

In My Hero Academia: World Heroes' Mission, U.A. High School students Izuku Midoriya, Shoto Todoroki, and Katsuki Bakugo face the greatest crisis in My Hero Academia history, with only two hours to save the world! During their internship with the number one Pro Hero Endeavor Agency, Deku and his new friend Rody find themselves wanted nationwide for a crime they didn't commit.  Can Deku and his friends stop Humarise's global plans of eliminating all Quirks? 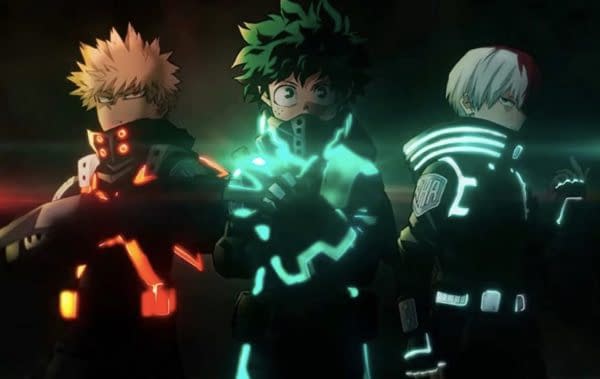 Review by Alejandra Bodden
0/10
Tickets are finally on sale for the highly anticipated My Hero Academia: World Heroes' Mission, set to hit screens this October.

A new trailer for Studio MAPPA's highly-anticipated anime Chainsaw Man has been released, carrying a beautifully edgy and gory vibe.

What We Do in the Shadows S04E05 "Private School" Embraces Family

FX's What We Do in the Shadows S04E05 "Private School" was a fun & fascinating look at the importance of family in all of its forms.

My Hero Academia "Laugh! As If You Are In Hell": Never Change, Deku

Crunchyroll's My Hero Academia OVA, "Laugh! As If You Are In Hell", focuses on the trio we've been wanting to see more of, and it works.

Crunchyroll's My Hero Academia OVA "Hero League Baseball" is a fun, home run-hitter that would've fit in nicely with the fifth season.

Daredevil Got Jokes? She-Hulk Writer on "Lighter Side" of Character

Returning on October 2, the new teaser for AMC's The Walking Dead Season 11 shows our heroes vowing to make things right... together.

AEW Rampage: Quake by the Lake – Full Lineup, How to Watch

With four matches and three interviews, AEW Rampage: Quake by the Lake will try to erase Smackdown from everyone's memory tonight, which is just so unfair!