The second episode of HBO Max's Peacemaker picks up at a crisis for Chris (John Cena) after a night of passion turned into a bloody scuffle and our hero's left trying to formulate his escape. As a "superhero", you'd figure there was some methodology when it comes to escaping a multi-story apartment complex but it gets pretty dicey in the episode "Best Friends, For Never". Peacemaker has a tall task for the majority of the episode not only clothing his mostly naked body, gathering his own things including classified information, stealing his one-night-stand's (Cyrstal Mudry) things, and eluding the authorities who were alerted to the ruckus from their battle. Here's a minor spoiler alert from here on out.

With all of this going down at night and time being of the essence, Peacemaker alerts his team, who scramble to help him escape. Leading the point on his escape is the very, very annoyed Harcourt (Jennifer Holland) operating tactical and driver Leota Adebayo (Danielle Brooks). Covering Chris' tracks digitally is John Economos (Steve Agee), who scrambles to redirect the local authorities to another trail. If you're watching Daredevil or The Punisher on Netflix, the scene would typically play out with the title character using their brutal hand-to-hand combat skills to neutralize their targets. Nope, in this more comedic yet also more practically smart moment, Chris demonstrates his parkour skills (rather lack thereof) trying to avoid any possible conflict.

One of those stops takes him to a not-so-happy couple who's had more than their share of marital problems, to say the least (you may have seen the preview of this scene released a few days ago). Played wonderfully by Alison Araya and Lenny Jacobson, they fall into every dysfunctional cliché you can think of but work well together working up their insecurities and making the awkward normal. And credit to series writer/director James Gunn for taking the cliche of the "bickering couple" and adding some very modern twists to their issues. Speaking of insecurities, we get another layer of Peacemaker from his internal monologue and subsequent interaction with Vigilante (Freddie Stroma). As is uncomfortably clear in this episode, Vigilante seems to share a Captain America-like naiveté of pop culture, with Chris needing to smarten him up to reality. Gunn makes Cena's main character so lovable and hard to hate, you almost forget how much of a tool he can be at the very worst times. "Best Friends, For Never" is a strong follow-up to the premiere and keeps the series' momentum flowing. 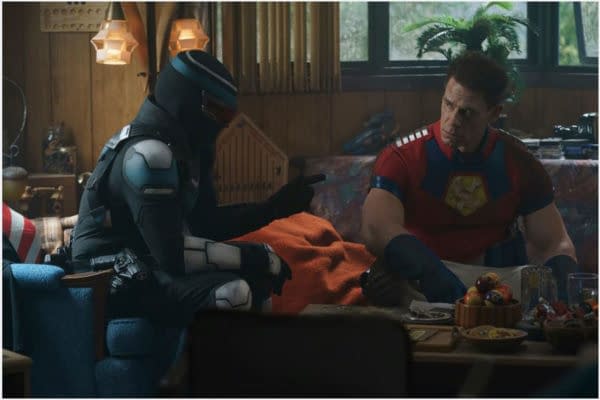 Review by Tom Chang
9.5/10
HBO Max series Peacemaker Episode 2 "Best Friends, For Never" is a strong follow up to its premiere, adding more depth to the fascinating folks who populate the action-comedy. On top of the main cast shining, we also see memorable performances from guest stars Alison Araya and Lenny Jacobson. And special mention goes to John Cena, whose main man is as polar opposite of DC superhero gracefulness as you can find resulting in a pratfall and slapstick masterpiece.
Credits
Director
James Gunn