The fifth episode of the HBO Max DC series Peacemaker titled "Monkey Dory" and finds the team infiltrating an alien food production plant. Meanwhile, Auggie (Robert Patrick) is still trying to clear his name with lead investigators Song (Annie Chang) and Fitzgibbon (Lochlyn Munro) after the team framed him for his son Chris' (John Cena)… "transgressions." Here is your official "minor spoilers" warning as we take a look at the most recent episode of the James Gunn series.

With the father and son bond pretty much ripped to shreds, Auggie is trying to let the truth come out how his son and his team were responsible for his frame-up even offering to recheck fingerprints versus what was found at the scene. That catches the ear of the reluctant Song, as much as she thoroughly detests his racist ways. We get the usual exchange of stereotypical jabs between how Auggie likes "Asian noodles" while Song throws random White guy names back at him in the process. Yeah, it's intentionally bad but it doesn't make it any less cringe-worthy. Much of the episode takes place in the enclosed mysterious alien food plant where we see the team at least starting off with some semblance of a plan before having to improvise their way successfully out of the situation (a nice way of saying, "blow shit up").

While we expected costumed heroes Peacemaker and Vigilante (Freddie Stroma) to shine, we get just as much quality action from the ARGUS agents including some serious kickass work from Hartcourt (Jennifer Holland), as well as non-combat specialists Adebayo (Danielle Brooks) and Economos (Steve Agee). The action sequences are about as fun as it gets even if they're not "choreographed masterpieces" as you would find in John Wick or Daredevil. And that's the beauty of it, because it works because it's not "pretty"- it's real. Yes, as the headline suggests, the team fights a gorilla that talks. And no, before you ask? It's not Gorilla Grodd. The payoff from this episode reminds me of the zaniness from the Evil Dead franchise as if that wasn't a giveaway of what's to come. Directed by Rosemary Rodriguez and written by creator Gunn, "Monkey Dory" works from top to bottom, from the pure joy & euphoria that vibes from the cast and the fun they're having, to the series' ability to blend humor with heart in an engaging way that has you needing to come back each week. 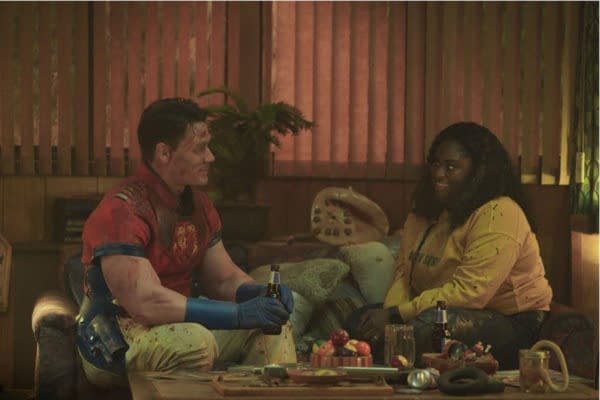 Review by Tom Chang
9/10
Directed by Rosemary Rodriguez and written by series creator James Gunn, HBO Max's Peacemaker S01E05 “Monkey Dory” works from top to bottom, from the pure joy & euphoria that vibes from the cast and the fun they're having, to the series' ability to blend humor with heart in an engaging way that has you needing to come back each week.
Credits
Director
Rosemary Rodriguez

Krsy Fox talks to Bleeding Cool about her latest horror film Allegoria from RLJE Films & Shudder, her love for the genre & more.

The Sandman E01 "Sleep of the Just": From Comics to Screen (Spoilers)

Netflix's The Sandman made some storyline changes as it was adapted from page to screen. Here's a look at some in S01E01 "Sleep of the Just."