It's hard to build a relationship when there's almost no foundational trust to build upon. The team behind Project Butterfly is finding out first-hand what their dysfunction is costing them in the Peacemaker episode "The Choad Less Traveled." As humorous as some of the titles are for this HBO Max series, the latest is one of the more serious ones as the team comes to terms with what happens by showcasing how Auggie Smith's aka White Dragon (Robert Patrick) influences as a horrible father impacted Chris' (John Cena) actions. This is your minor spoilers warning.

We have a heart-to-heart between father and son in prison where the former is being held and it goes about as disastrous as expected. After a talk with Adebayo (Danielle Brooks), Vigilante (Freddie Stroma) gets himself arrested and sent to prison as Adrian Chase rather than his alter ego to get closer to Auggie. We do get one moment of zany action from Judomaster (Nhut Lee), who the team thought was originally incapacitated.

The rest of the episode follows Peacemaker in isolation and Vigilante plotting his next move in prison. We get into a psychological deep dive from Chris' past to where we've reached a point of no return with the character that goes a long way towards redeeming him for his actions from The Suicide Squad. It makes it harder to see him as the villain or even that gray area of being an anti-hero. It's kind of a credit to James Gunn for fleshing out the character in ways that benefit Chris and the series without having to sacrifice anything that came before it.

While much of this Peacemaker episode is driven by Cena, Stroma, and Patrick's performances, we're starting to see how much Brooks' Adebayo has become the moral glue that binds the team together. Also, I'm pleasantly surprised to find that Steve Agee's Economos and Chukwudi Iwuji's Mum's neuroticism is starting to grow a little on me. Speaking of growth… at the rate this series is going, it could start giving Amazon's The Boys a run for its money as the best adult superhero series. Your move, Butcher. 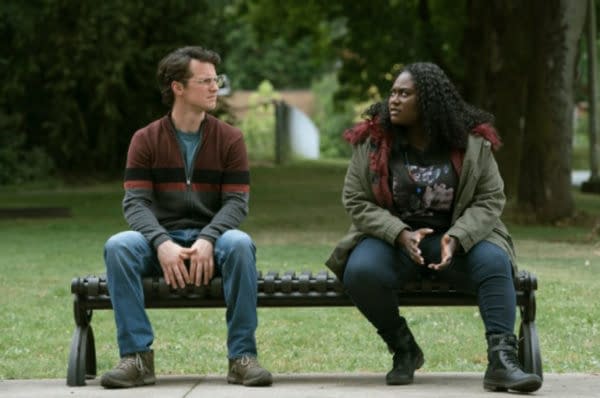 Review by Tom Chang
8/10
HBO Max's Peacemaker dives deep into the character's past to the point where he can no longer be seen simply as a villain or even an anti-hero. We're seeing Cena take Chris Smith to places few imagined when they first saw his portrayal on the big screen. We find ourselves rooting for him even when he reaches out for something we know will never happen, like his bigoted father's acceptance. And a special note about Danielle Brooks aka Adebayo, who is doing an excellent job proving herself to be the complex heart and soul of the team.
Credits
Director
Jody Hill