To be honest, I was hoping for so much more from Star Trek: Lower Decks. It just seems like there's no real story to the series anymore, feeling like nothing more than just an elaborate fourth-wall-breaking DVD extra to compliment a real show. How they don't just rename it to Star Trek: Easter Eggs by now is beyond me. It's clear where the audience is for the series and it no longer feels like it's as interested in drawing in new fans to the franchise as it was. Creator Mike McMahan seems to just be content just throwing random s*** against the wall from the wealth of past canon to see what sticks and none of this was more evident than in the episode "I, Excretus".

In an attempt to bridge empathy between senior staff & lower deckers, the Pandronian drill instructor Shari yn Yem (Lennon Parham) devised a series of tests in random holodeck-driven training scenarios among the U.S.S. Cerritos crew to report back to Starfleet on. To stress the existing divide (in case you haven't been paying attention to previous episodes), the lower deckers in Mariner (Tawny Newsome), Boimler (Jack Quaid), Tendi (Noël Wells), and Rutherford (Eugene Cordero) are on an away mission to repair a satellite in their spacesuits. An emergency calls the ship away despite the lower deckers already completing the mission. After six hours, they're transported back half-frozen but still alive.

The training scenarios aren't anything like the Kobiyashi Maru, but scenarios that were often depicted in The Original Series and The Next Generation. For those with an encyclopedic knowledge of the franchise, you're in for a treat. If you haven't seen those episodes, it would be a hit or miss. To the show's credit, I guess, they try to pick some of the most recognizable ones. It's more a hit if you're a fan of the franchise and Lower Decks seems to be making no apologies for being a comedy that caters to die-hards. Since it's Paramount+ and they consider this "bold franchise expansion," we'll probably get a few more seasons more. But I'm starting to feel like unless they're going to attempt to create a "big tent" series that can serve to welcome new viewers than just a steady flow of fan service patronizing the audience with a flow of "been there, done that," it should end with this season. 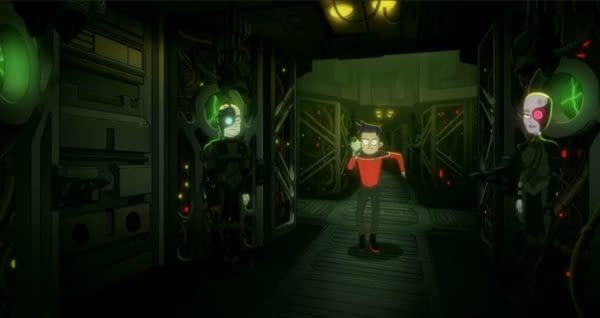 Review by Tom Chang
3/10
Another best of hits compilation some die hard fans of the Star Trek franchise may enjoy, but might leave some newer fans confused. Kept searching for a real story in there, but they seem to just run out of them and just hit recycle on what worked then on previous shows.
Credits
Director
Kim Arndt

WWE responded to Sasha Banks and Naomi walking out on Monday's RAW by suspending the two indefinitely and removing their merchandise.

SmackDown Recap 5/20: Who Are The Unified Tag Champions?

Our recap of this week's WWE SmackDown on FOX, where RK-Bro faced The Usos to unify both Raw and SmackDown's Tag Team Championships.

The Stranger Things 4 cast offers personal takes as they recap the first three seasons; the Duffer Bros explain why this season is so huge.